Spaghetti aglio e olio is a traditional Italian pasta dish from Naples. It combines the goodness of pasta with an ingredient as simple as olive oil and garlic. 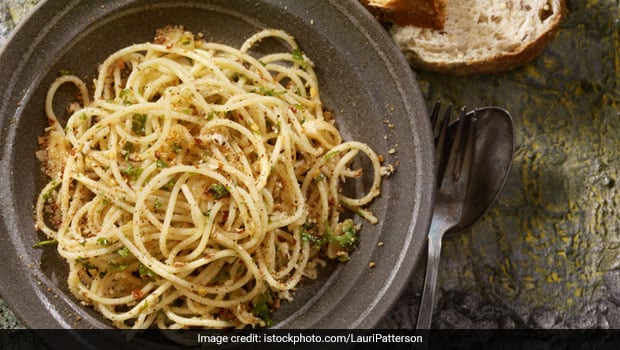 Sometimes, simplest of the foods are the toughest to prepare. From mere dal to chai, the dishes might sound simple but can go wrong very easily if not prepared well. One of such dishes is spaghetti aglio e olio - spaghetti tossed in aglio (garlic) and olio (oil). Sounds easy, right? But several people go wrong with the preparation of this 'simple' dish by either over or under boiling the spaghetti or by over-cooking the garlics. It is true that every preparation of pasta needs a perfect boil; but if at all the boil goes wrong in dishes like red or white sauce pasta, that can be compensated with the rich taste of the sauces. But for aglio e olio, due to fewer amounts of ingredients, every element has its own distinct taste and flavour in the dish. Spaghetti aglio e olio is a classic dish with which you just can't go wrong.

(Also Read: All You Need to Know Different Types of Pasta and their Cooking Methods)

For the unversed, Spaghetti aglio e olio is a traditional Italian pasta dish from Naples. Although, people use different types of pastas to prepare this dish, trust us, spaghetti tastes the best! The best part is you have the liberty to use the oil and garlic as much you want. So make the spaghetti oily and spicy!

Take water in a big bowl, add some salt and oil and put on flame.

Wait till it boils.

Now, lower the flame and add the spaghetti and give a stir occasionally.

Wait for exact eight minutes and strain the water.

Add the garlic and after some time, the chilli flakes, and stir till the garlic turns light-brown in colour and releases its aroma.

Sprinkle some salt and add the freshly chopped parsley and toss twice.

Once all the elements are mixed well, you can add some grated cheese, if you want.

And your spaghetti aglio e olio is ready to be served. Remember, you can add more oil, garlic, chilli flakes and parsley if you want.

Make sure you have it hot.