Here, we've gathered a smattering of what we think are ambrosial sweet dishes from the states down under; the entire list would go on for pages! 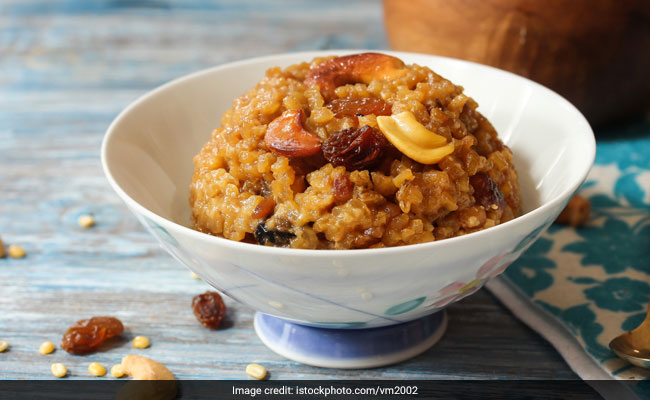 Here are 10 south Indian sweets that are simply irresistible.

Most people, when asked to conjure up a list of Indian sweets, wax eloquent about the charms of jalebi and gulab jamun, and perhaps of modaks. When it comes to South India though, they stop short at payasam. A pity, because the South is no slouch when it comes to sweets. Here, we've gathered a smattering of what we think are ambrosial sweet dishes from the states down under; the entire list would go on for pages!

It's almost impossible to make a list of desserts from southern India and leave payasam out of it. Payas, an ancient Indian dish that was possibly a forbearer of modern-day payasam, was mentioned in Buddhist literature from as far back as 2,000 years ago (according to eminent food historian, K T Achaya). Buddhism in India shrank, but the tradition of making payas remained (and possibly morphed into the kheer or payasam we have today). Payasam is also mentioned in the Ramayana; where king Dashrath offers it to his wives as a means to begetting sons.

Today, we prepare payasam on auspicious occasions -- offered in temples, and served as part of sadya. The Oxford companion to Sugar and Sweets tells us that payasam is "prepared from rice, pulses, semolina, or other starchy ingredients simmered in milk to produce puddings of varying thickness", and is popular in Kerala, Tamil Nadu, Andhra Pradesh, and Karnataka. Kerala Tourism even organised an annual Payasam Festival around Onam. It's an iconic dessert, but this doesn't mean it cannot be tampered with - today, you get payasam spackled with dry fruits, cooked with fresh fruit, even carrots, and gourds!

Payasam is prepared from rice, pulses, semolina, or other starchy ingredients simmered in milk.

Kozhukattai is a rice dumpling stuffed with coconut and sweetened with jaggery, a cousin, perhaps, to modak. Like so many other Indian sweets, it is irrevocably tied to religion; in Tamil Nadu, it is offered once a year to Lord Ganesh, as well as being an indelible part of Vinayak CHaturthi celebrations. Meanwhile, according to the Historical Dictionary of the Tamils, by Vijaya Ramaswamy, it is also a "sweet dish dear to Pillaiyar, a deity who was Auvaiyar's special object of worship." Auvaiyar being a poet-saint of the Sangam era.

Kozhukattai is a rice dumpling stuffed with coconut and sweetened with jaggery.

I paraphrase Shakespeare when I say that a paniyaram, by any other name, would taste just as delightful. Known variously as paddu, gunta ponganalu, and gundu ponganalu, the paniyaram comes In both sweet and savoury versions. The sweet version is usually made in a special paniyaram pan, with leftover idli batter; the spheres are usually shot through with jaggery, coconut, and cardamom.

The origins of Mysore Pak are shrouded in mystery. Its name suggests its history right away - Karnataka, of course! But Tamil Nadu stakes its claims to the dish, too. However, I am inclined towards crediting Mysore, since it is said that Mysore Pak was invented by a royal cook, Kakasur Madappa, whose descendants now run the iconic Guru Sweet Mart on Sayyaji Rao Road in Mysore.
Although it is usually cleft into 'wet' and 'dry' varieties, the Mysore Pak at Guru Sweet Mart seems to straddle both - it is warm, rich, neither too dry nor too mushy. Rich with ghee, and lightly flavoured with cardamom, it certainly is a dish fit for kings.

(Also read: Mysore Pak -The Three-Ingredient Dessert That Melts in Your Mouth)

It is said that Mysore Pak was invented by a royal cook, Kakasur Madappa. Photo Credit: Istock

Just in time for Diwali comebadusha, the gloriously decadent dessert from the south. Cousins to balushahi, they are shaped into doughnuts, deep-fried, then dunked into sugar syrup for an added layer of sweetness. Chitti badushas are smaller than regular badushas, but whatever the size, they are usually fried up during festive occasions such as Diwali. In the seminal Samaithu Par, S Meenakshi Ammal, gives us the recipes for many badusha varieties, including an indulgent butter badusha!

The dried apricot is the star of this Andhra sweet. Soaked overnight in sugared water until they crumple into softness, the apricots are mashed and simmered with sugar the next day into a sort of compote, then layered over clotted cream, or custard of some sort. A sublime dessert, it is often served at Hyderabadi wedding feasts.

The Moplah community of Kerala spins many an unusual dessert, including Pinnanathapam (egg snow pudding) and muttamala, which is made by pouring a fine stream of egg yolks in concentric circles over boiling hot sugar syrup. The trick is in gently lifting the necklace (mala) of sweetened egg without shattering it, no mean feat. Ummi Abdulla, well-known maven of Moplah food, in her book Malabar Muslim Cookery, suggests serving it with the aforementioned egg snow pudding, which is made from the egg white and sugar syrup that are left over from the muttamala.

A sweet usually prepared during festival seasons, Kajikayalu (or karachika) is the Andhra version of karanji, a crisp crescent of dough stuffed with coconut and dry fruit, and then deep-fried. Nowadays though, kajikayalu can be baked too.

Little whorls of sweetness, seeni mittai is a traditional Tamil sweet, said to have been born in Tuticorin. Made with a mixture of rice flour, urad dal, and perfumed with cardamom, these deep-fried beauties are coated in a hard shell of sugar syrup of various types, resulting in a crisp, sweet, irresistible delicacy.

G. Padma Vijay, in her book Indian Breads: A Comprehensive Guide to Traditional and Innovative Indian Breads writes that the obbattu is an unleavened, traditional flatbread, traditional to Karnataka, made with maida and stuffed with sweetened Bengal gram. Similar, but not quite, to the puran poli, it is usually made during Diwali and Ugadi. Purists may scoff, but nowadays, an entire pantheon of flavours have been infused with the original - date and fig-flecked ones, saffron and turmeric-tinged golden ones, coconut-infused ones, even gulkand-flavoured versions!