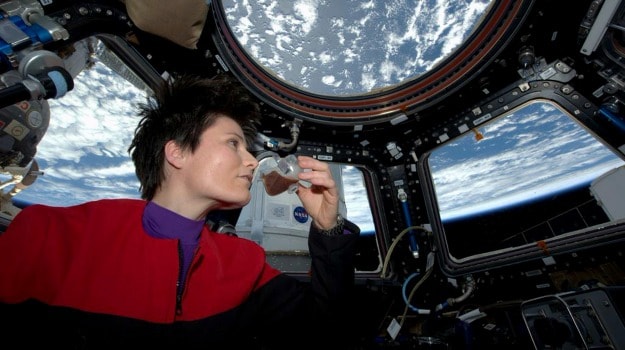 Samantha Cristoforetti had an espresso on Sunday that was out of this world, and she did it in the name of science. Cristoforetti is an astronaut, the seventh Italian and the first Italian woman to venture into orbit. She has been at the International Space Station since November, and over the weekend got to do something quintessentially Italian: She became the first person to drink an authentic serving of what she called "the finest organic suspension ever devised" in space.

"Fresh espresso in the new Zero-G cup! To boldly brew ... " she posted on social media, where she has been chronicling her stay on the station with photos and explanatory videos.

However much she may have enjoyed her first espresso in more than five months, making the drink in orbit was no lark, but "a very serious study in fluid physics," Roberto Battiston, president of ASI, the Italian space agency, wrote in an emailed statement. "Until Sunday, we didn't know exactly how hot fluids under high pressure reacted" in the near-weightless environment of the space station, he said. "Now we do."

A special espresso maker, named ISSpresso, was designed for the task by Argotec, an engineering and software firm based in Turin, and the Italian coffee producer Lavazza, with help from the space agency. It was included among the experiments and technical demonstrations that Cristoforetti, a captain in the Italian air force, was scheduled to carry out on her mission to the station, which ends in mid-May.

"Coffee represents one of the distinctive elements of Italian culture," said a spokeswoman for the agency, who requested anonymity under her agency's rules for employees.

Making a proper espresso - a singular alchemy of high temperature, water pressure and perfectly tamped coffee - is difficult enough to master on Earth. Microgravity conditions made the task still more complicated, and Argotec took two years to work out how to do it.

"We developed our hardware on the basis of the parameters for making good coffee, while considering safety requirements," said Valerio Di Tana, an engineer at the company. The squat, 44-pound machine wound up looking something like an old-fashioned laboratory incubator, built from military-standard components. "You don't see those on terrestrial machines," Di Tana said.

The dripless system is even designed to emit a small waft of freshly brewed coffee odor when the straw is inserted into the pouch containing the brew. Two small flaps on the side allow an astronaut to hold it without burning a hand.

An important part of the espresso-in-space experience is the newly developed microgravity coffee cup, which allows astronauts to sip liquids more or less the way they would use a cup on Earth. It does not have an open top that would allow spills, though; instead, the liquid reaches the astronaut's lips by capillary action - "almost like the wicking of water through a paper towel," a NASA blog post explains. The cup also provides data on the passive movement of complex fluids in space, NASA said.

The ISSpresso machine makes other hot drinks as well, including tea and consommé. "This is important from the nutritional aspect, but also gives the astronauts a psychological boost," David Avino, the managing director of Argotec, said in a telephone interview on Monday.

The company had already begun the project when another Italian astronaut, Luca Parmitano, remarked in a June 2013 interview from the space station that the one thing he really missed in space "was a good cup of espresso."