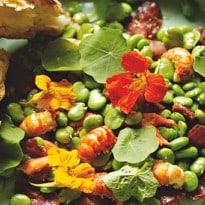 It takes a little effort to get to the meat of the matter with fresh broad beans, but it's worthwhile. Serve them with everything and make no apologies

As with most things in cooking - and in life, if I'm being totally honest - when the first broad beans appear, I always think to myself, "What would Jane do?" The wonderful Jane Grigson says of broad beans: "Few things taste better than a dish of new young vegetables, lovingly cooked. No need for meat or apologies." I couldn't agree more. Yes, there is a small amount of effort required to get to the meat of the matter, but it's worth every second. This is one of those kitchen tasks where you can genuinely get the kids involved, too - in exchange, they get a faintly farty smell lingering on their fingers with which they can terrorise each other for hours. Fun for all the family.

Broad beans can be eaten raw, pods and all, but only if they are very young and small, and freshly picked, so unless you grow your own, cooking is the way to go.

250g beans in the pod per person

Bring a large pan of water to a rapid boil. Pop the beans out of their pods and prepare an ice bath. Cook the beans in small batches for a minute (give larger beans up to two minutes max) - it is important that the water remains at a rolling boil, so don't cook too many beans at once and cover the pan to keep it boiling. Plunge the cooked beans straight into well-iced water. Once all the beans are cooked and chilled, remove the skins - the beans should squeeze out easily - and they are ready for use in any of today's recipes.

Sort of like baked beans, but nicer. Serve these on grilled sourdough that has been rubbed with half a clove of garlic, or with pasta, or lamb. Serves four.

Chop the tomatoes and place in a large, heavy-based pan with the olive oil. Cook on a low heat for half an hour, stirring often, until most of the liquid has evaporated and you're left with a thick, rich paste. Push the tomatoes through a sieve to get rid of the seeds and skins, and return to the pan. Add the anchovies, cheese, beans and rosemary, and stir gently so the beans don't break up. Heat through, allowing the cheese to melt slightly, season to taste and serve.

This is how we're serving broads at the restaurant at the moment, with a dish of slow-cooked suckling pig. These also go fabulously with roast lamb or goat. Serves four.

Cut the bacon into thin strips, cook slowly in a heavy-based pan until crisp and golden, tip on to kitchen paper to drain, then set aside.

Warm the butter gently in a pan until most (but not all) of it has melted, then slowly add the water, blitzing with a hand blender the whole while until the mixture has emulsified. (If it splits, add a couple of cubes of butter and a little more water.) Heat the emulsion in a saucepan. Shred the mint finely, then stir the mint, bacon and beans into the emulsion, heat through and season to taste (the salt in the butter and bacon should be sufficient). Serve immediately.

Broad beans with crayfish and nasturtium

English crayfish are in season right now, and the quality this year is superb. If your fishmonger can't get hold of them, replace with langoustines or, at a push, prawns (or treat yourself to a lobster). This is an elegant dish, perfect for a posh, summery lunch. You don't often see nasturtiums in the shops, granted, so grow your own, nick some from a neighbour (though don't let on I told you to do so), or use watercress, rocket or mustard leaf. Serves four.

Cook the crayfish in boiling water for a minute if small, two if large. Separate the claws, head and tail. Shell the tails and remove the vein -the easiest way to do this is to pinch the central fan on the tail, then twist and pull: the fan should come away, taking the vein with it. Crack the claws gently on both sides with the back of a knife, break open and take out the meat; discard the cartilage.

Heat the oven to 150C/300F/gas mark 2. Put the picked crayfish meat in an ovenproof dish. Fry the pastrami quickly in a little oil, to colour, then add to the crayfish.

Melt the butter in a saucepan. Gently stir the beans in the butter, then tip over the crayfish. Bake for a couple of minutes, gently to warm through - again, don't leave them in too long, because both beans and crayfish will overcook quickly.

Stir in the lemon juice and season to taste, though it should be salty enough already. Decorate with the nasturtium flowers and leaves, and serve with crusty bread and chilled white wine.

Great with steak and chips, or with fried meaty fish such as monkfish or turbot. Radish shoots are hard to get hold of, but you can easily sprout your own - just soak red radish seeds in cold water for 12 hours, rinse, leave in a clean container and rinse twice a day for five to seven days, by which time you'll have about 1-2cm of fiery radish goodness in the form of a sprout. Serves four.

Mix the wasabi, lemon juice and mayo. Cut the radishes thinly. Mix the beans into the wasabi mayo, then pile a mound in the centre of each plate. Arrange the radishes on top. Dress the pea shoots with olive oil and lemon juice, season, then scatter over the top and serve.

In the unlikely event of there being any cooked beans left over, I urge you to try this: mix equal weights of cooked broad beans and ricotta, whizz to blend, then eat on pitta with crisp bacon, parma ham or salami. Proper yum.

• Mary-Ellen McTague is chef/owner of Aumbry in Prestwich, Manchester.