Ganesh Chaturthi begins today. Follow this simple recipe by Being Marathi Recipes to make sheera to offer to Lord Ganesha in prasad. Other prasad offerings include modaks, fruits etc. 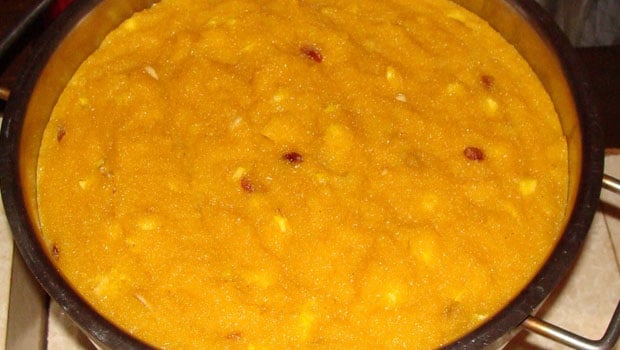 Ganesh Chaturthi Bhog: Sheera is offered as part of prasad to Lord Ganesha

The Hindu festival of Ganesh Chaturthi begins today. The 10-day festival celebrates the birth of Lord Ganesha - the elephant-headed son of Goddess Parvati and Lord Shiva. The festival is characterised by installation of brand new idols of Lord Ganesha at the beginning of the festival and then immersion of these idols when the festival ends. Ganesh Chaturthi 2019 has begun on September 2nd this year and will end at September 12th. However, some people may choose to celebrate the end of Chaturthi after a day, a day and a half, three days, five days, seven days and 10 days and the immersion processions are taken out with a lot of devotional fervour and celebrations.

The festival is also known for its delicious food, including a variety of rich sweets. Some foods that are a part of the customary Ganesh Chaturthi menu include modaks, ladoos, puran poli, sheera etc. Everyone is familiar with the sweet stuffed dumplings called modaks that are said to be a favoured treat of the Lord himself. This is why it is customary to place modaks in the prasad thali or the platter of edible offerings placed before the idol on Ganesh Chaturthi. Prasad comprises fruits and sweets that are offered to the God to partake in. Sheera is a sweet made from semolina that is also a part of the prasad offered to Lord Ganesha during the festival. The simple sweet is made by cooking semolina with sugar and milk and is simply flavoured with dessert spices like saffron, cardamom etc.

The sweet is made by cooking rava in ghee, and then adding chopped nuts and dried fruits to the mix. Sugar and boiled milk are then added and the mixture is cooked until the rava or semolina expands and becomes soft. Sheera is part of the holy offerings in different parts of the country and it's ready within minutes. Some people prepare fruit-flavoured sheera as well, including pineapple sheera, orange sheera and banana sheera. This recipe by YouTube Chef Vaishali Polke uses the creaminess of a single ripe banana to add some fruity goodness to the mix.

Take a look at the full recipe video of 'Prasad Ka Sheera' by YouTube channel 'Being Marathi Recipes':