Ginger Ice-Cream and Chocolate Cones for a Summer Heatwave 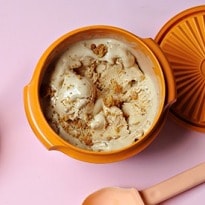 Take the edge off the sweltering sun with this crunchy, ginger ice‑cream, loaded into a crumbly cone - all without turning your kitchen into a furnace

There's no need for summer baking to be a nightmarish experience of scorching sun, a heat-belching oven, melting butter and deflated meringues. These next recipes balance hot and cold, straddling the divide between baking and freezing, with a ginger biscuit ice-cream and easy stove-top chocolate cones.

Some biscuits are crushed and added straight to the custard base, while the rest are added in chunks once the ice-cream has frozen - it's the best way to blend in the spiced, caramel flavour while keeping a textural contrast. This recipe makes more biscuits than you'll need, so save the rest for the biscuit tin or, better still, for sandwiching together with scoops of the ice-cream. If you're feeling lazy, swap in 150-200g shop-bought ginger biscuits instead.

1 In a large bowl, rub the butter into the flour. Stir in the ground ginger, bicarbonate of soda, salt and sugar. In a separate bowl, lightly whisk the golden syrup and milk, then add this to the other ingredients. Use a knife to repeatedly cut through the mixture to combine the wet and dry components. Doing this (rather than simply stirring or kneading) incorporates the liquid without toughening the dough.

2 Once all of the flour is beginning to come together in small clumps, wrap the dough in clingfilm, flatten to a fat disc and refrigerate for 15-30 minutes - just long enough to leave the dough firm enough to shape. Meanwhile, preheat the oven to 180C/350F/gas mark 4.

3 Line 2 baking trays with parchment. Break off small pieces of the dough and roll into small balls. Space these well apart on the trays. Bake for 17-20 minutes. They'll get firmer as they cool.

4 For the ice-cream, first heat the milk over a low heat until scalding. In a mixing bowl, whisk the egg yolks with the sugar until smooth, then beat in the ground ginger. Pour the scalding milk slowly into this egg mix, whisking constantly to avoid scrambling the eggs. Decant the mix back into the pan and set over a low heat.

5 Gently cook the custard for 5-10 minutes, stirring constantly to stop the mixture curdling. Once the custard has reached a similar consistency to thick cream and coats the back of a spoon, it's ready. Take care not to overcook it, or it will separate. Pour into a clean bowl or ice-cream tub, stir in the vanilla extract and set aside.

6 Bash ¼ of the cooled ginger biscuits in a freezer bag or large bowl until sandy, then pour these crumbs into the custard. Stir in the double cream and leave to cool to room temperature.

7 Once cool, transfer the ice-cream to the fridge to chill. Once cold, move to the freezer or ice-cream machine. If using a machine, follow its instructions. If churning by hand: put a lid on the container and place it in the coldest compartment of your freezer, leave for 30 mins, then beat vigorously to break up any ice crystals. Return to the freezer for 30 mins and repeat until the ice-cream is thick and creamy - on the verge of being fully frozen.

8 At this stage, break another quarter of the ginger biscuits into small chunks and stir them through the nearly-set ice-cream. Leave to freeze completely; remove from the freezer 15 minutes before serving if you've churned by hand (it tends to yield a firmer set).

Ice-cream cones needn't be mere cursory vessels: these ones are events in themselves. Reserve any leftover yolks for making more ice-cream!

1 First, prepare a cone mould: scrunch a length of tin foil into a cone shape, tapering it tightly at one end (the wide end needn't be perfectly neat).

2 Melt the butter over a low heat, then set aside to cool slightly. Whisk the egg whites with the sugar until barely frothy, then add the milk. Combine the flour, cocoa powder and cinnamon in a separate bowl, sifting if necessary to break up any clumps. Whisk the dry ingredients into the egg mix before stirring in the melted butter and salt. Leave to rest for 15 minutes.

3 Melt a little butter in a nonstick frying pan over a medium-low flame. Once hot, add 2 tbsp of the batter and quickly swirl the pan to help it spread to form a wide circle. Cook for 1-2 minutes, until the upper surface sets. Flip the circle and cook for a further minute or so. It's difficult to gauge just how long to cook these: they harden as they cool, but until you've made a couple you won't know whether you've given them quite long enough to harden to a satisfying snap.

4 As soon as a cone is cooked, tip it from the pan and let it cool on a work surface for 20-30 seconds - just long enough to leave it cool enough to handle. Wrap the circle around the cone and leave to cool completely, lying it on the join to prevent the cone from unfurling.

5 While each cone cools, you can start cooking the next one. If you're being particularly efficient, you might want to have two or three moulds on the go, delegating the frying or shaping to helpers. Dip the ends in melted chocolate if you like. The cones will soften over time, so they are best eaten soon after cooking.

We're turning the heat down this week with this ginger crunch ice-cream. Photography: Jill Mead for the Guardian