Grain Salads and How to Make Them | Back to Basics 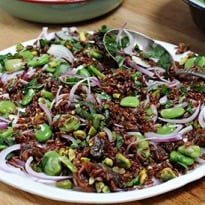 Learn how to put quinoa, bulgur and rice to good use in part three of our salad masterclass for a cereal thriller every time...

Over the years, I have noticed that I extend far more dinner invitations than I receive. This may be purely an issue of (un)popularity; but it is also - or so I tell myself - because people are frightened of cooking for me. They imagine that because I work in the restaurant business, I must be fantastically hard to please. I will expect foams and reductions and food arranged in towers with chives delicately criss-crossed on top.

In fact, quite the opposite is true. I'm so thrilled to have someone else cooking for me, I couldn't care less what they put on my plate. Baked beans on toast tastes like haute cuisine when prepared by another's hand. I get quite tearful with gratitude if my host goes to the bother of rustling up a spag bol.

There are only a handful of things I really don't enjoy eating. I am saddened by "baked" potatoes cooked solely in the microwave (thus doing away with the crispy skin, which everyone knows is the best bit). Neither can I be doing with bouncy Danish mozzarella, posh ketchup (it never tastes as good as Heinz), or shop-bought, greying guacamole.

But the worst gastronomic sin of all - leftover from the 70s but still, mysteriously, going strong - is the cold white rice salad, studded with diced green pepper, tinned sweetcorn, vegetable oil and vinegar.

The thing about this rice salad is that it doesn't taste nice. Never has, never will. This bothers me, because a good rice salad is one of my favourite things. And it's really so simple to do it well. You just have to follow a few basic rules:

• Try a few different types of rice. Wild rice, basmati and camargue (red) rice all work well. And most good recipes for rice salad can be adapted for other grains, such as quinoa, pearl barley or pearled spelt.

• Dress the salad when the rice is warm, and serve the dish at room temperature. Nothing tastes good straight from the fridge. If you have made your rice salad the day before, take it out of the fridge a good two hours before serving to allow it to warm up.

• Make, taste, and season the dressing before putting it on the salad - don't try to add the oil and acid (vinegar or citrus) separately to the salad.

• Give some thought to how you chop the different vegetables you are using. I like to throw in some longer ribbons of veg to snake through the salad.

• Play with textures - include soft, crunchy, and crispy.

• If you are going to add a sweet burst, use dried fruit, peas or fresh grilled sweetcorn, rather than the tinned stuff.

The recipe below will give you a chance to try out these tricks of the trade. Make it to go with whatever you're cooking on the barbecue. And feel free to invite me along.

My old friend Roly said this salad looked like a Jackson Pollock painting and the name stuck. If you don't have the inclination to double-pod the broad beans (see method) you can substitute them for fresh or frozen peas or runner beans sliced long and thin, but steer clear of frozen broad beans.

Instead of coriander you can play with other soft herbs: parsley, chervil, chives or basil. Or you could even add strong leaves such as rocket or mustard.

1 Cook the rice in boiling salted water for about 30 minutes until it has a soft bite to it.

2 Pod the broad beans, then put them in the boiling water. Bring back to the boil and cook for about a minute. The younger and fresher the beans, the less time they will need. Drain and cool them under a cold tap, then skin them. (If you are making the salad for the next day, keep the skinned beans separately in a bowl until you are ready to serve to help them keep their bright-green colour.)

3 Peel and very finely slice the onions - I use a mandolin. They should create soft swirls in the finished salad.

4 Chop the apricots until raisin-sized.

5 Take the rice off the heat and rinse through a little cold water to cool it down a little. Drain well. Mix in a bowl with the onions, apricots, olive oil and the juice from the lemon. Season with salt, pepper (and more olive oil and lemon juice if necessary).

Everything up to this point you can do the day before. Then, before serving:

6 Toast the pistachios for a couple of minutes in a hot, dry frying pan and then crush under a tea towel with a rolling pin. Mix into the salad.

7 Chop the bacon small, crisp it up and stir that in too. Stir in the podded broad beans. Chop the coriander fine and mix that in, too. Check the seasoning again and serve.

Farro: Cook the farro as per the instructions on the packet. In a large pan heat some olive oil and crushed garlic. Toss the cooked faro in the oil and season well. Add some chopped, blanched vegetables such as peas, spinach and beans along with loads of chopped herbs. Barley can be served in a similar fashion.

Bulgur: Combine soaked bulgur with any roasted vegetables and a lemony olive oil dressing. Bulgur can also be toasted, seasoned and added to salad to give a different texture and crunch .