Grains are Great but Should You Mix Them? 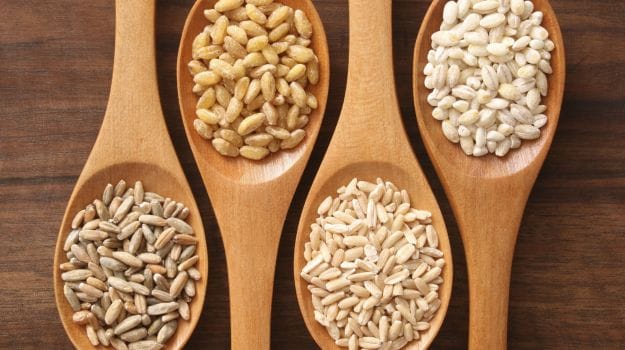 If someone’s talking about grains in 2018, it’s probably to tell you that they are an essential element of a healthy diet. They’re a hot topic and rightly so. Scientific studies have rebutted the benefits of going gluten-free by throwing the spotlight on the need for fibre. Gluten is a type of protein found in most grains, which makes it hard for some people to digest it. Let’s be clear, unless you are gluten intolerant you’d do well to give them a chance.

To start with, a cereal grain that contains bran, germ and endosperms is a whole grain while refined grains are those that retain only the endosperm after being processed like white rice. Grains are the seeds of grasses cultivated for food. They are valuable sources of fibre and vitamin B12. Fibre takes time to digest and makes you feel full for longer. This also helps in keeping blood sugar and insulin levels down.  All grains are naturally low in calorie density.  If you eliminate grains you tend to over eat other foods which could lead to more body fat.

Some new-age theories may argue against grains. We’re told – eat what the ancestors ate. With the popularity of the Paleo diet which focuses on meat, fish and raw foods, grains turned evil. They were being named as a product of modern technology and banished for containing anti-nutrients like gluten, lectins and phytates. But dieticians are not impressed and find it unrealistic. Any diet that restricts certain food groups and emphasizes on others isn’t balanced or sustainable. Moreover, lectin (phytonutrients) and phytates (antioxidants) are present in everything you eat and are broken down to a large degree on cooking.

Grains get a negative rap because many of us are eating the not-so-good ones like refined flour or white rice. I think processed food deserves criticism not only because it is low in nutrition but also because we eat way too much of it. As per U.S. Dietary Guideline, “consume at least half of all grains as whole grains. This means that at least three servings of whole grains are recommended for all Americans age 9 and up.” To support the same, a Harvard study suggests that the secret to a long and healthy life is to add whole grains to your daily diet. It lowers the risk of chronic diseases like heart trouble, diabetes, certain cancers and other health problems.

Out there is a whole world of grains you’ve probably never tried. But you might want to consider these first. They deserve a place on your plate.

Amaranth
This ancient grain has gracefully made its way into modern meals. We’re not fans of the word but it’s our very own superfood. Its high protein content sets it apart from others. Another reason to love this grain is that it’s gluten-free. Grind the grain into flour and use it in breads or pancakes. Amaranth seeds can be roasted, toasted or boiled and added to other dishes. They have a malty and nutty sweetness and are great as a thick and sticky breakfast cereal.

Barley
This is a wonderful grain that doesn’t get the attention it deserves. It has an abundance of potassium and the highest amount of fibre amongst others. With a chewy texture, barley is great in stews, soups and salads. Pearl barley is softer and releases starch into the cooking liquid which makes it a good thickener.  For the perfect taste, combine one cup of barley with three cups of water.

Oats
Nothing says ‘good morning’ like a creamy bowl of oatmeal. Besides being a breakfast staple, oats make for an excellent substitute for flour in baking. Think oat muffins, crumble and cookies. Cooking oatmeal in milk makes it thicker and stickier, use water instead. If you let the water come to a boil and then add oats, you’ll get more texture in contrast to boiling them in water which makes them more creamy.

Brown Rice
In case of white rice, most of the fibre and many of its nutrients are left behind in the milling factory. In contrast, brown rice is rich in fibre and high in Vitamin E. In her recipe, Martha Stewart uses 1 1/4 cups water for 1 cup for long-grain brown rice. For short-grain, she uses 1 1/2 cups water. “Many recipes call for 50 minutes, but we think 30 minutes is plenty,” she suggests.

(White Rice, Brown Rice Or Red Rice: The Healthiest One)

Millet (Bajra)
Bajra is widely used in Indian cuisine and is packed with iron and calcium. The famous Bajra ki Roti or Bajre ki Khichdi are winter staples in the Northern part of the country. Other millets like Ragi and Jowar are also smart carbs and gluten free.


Should we mix grains?

With the latest multi grain craze, this is one question which has been on everyone’s mind. Here’s a grain of truth - don’t let fancy labels fool you.  Certain foods may scream multi grain when they contain more than one type of grain, although none of them may necessarily be whole grains. Read the first ingredient; if it’s flour or refined flour, your meal may not be altogether healthy. But then again, the idea of mixing should not be dismissed.

“I’d suggest a mix of ragi, bajra, wheat, soyabean and barley. Mixing cereals and pulses increases the nutritional value. You can stuff them in paranthas or use them as batter for dosa or uttapam,” says Dr. Ritika Samaddar, Dietician at Max Health Care, New Delhi.

The major benefit of combining grains comes from their amino acid content. Grains are incomplete proteins – they may not contain all essential amino acids. Combining different varieties represents complementary proteins.

Listen to the latest songs, only on JioSaavn.com
Nutrition Consultant, Dr. Shalini Singhal agrees, “Mixing grains is a healthy option as each of them has their own unique nutritional value and composition. If a certain nutrient is lacking in one, it can be compensated by adding another.  Moreover, the fibre content in a mix is generally higher. You can use multigrain flour for chappatis by adding grains like jowar, barley, oats, bajra and other millets along with gram flour or soyabean flour to enhance the fibre and protein quality. It also improves the satiety value and lowers the glycemic index.”

Grains are healthiest when sprouted. More protein, vitamins and minerals. Sprouting spikes up the fiber content almost three times and lowers the level of gluten. You can sprout any kind of whole grains but it's important that the germ and bran are intact.