Rani Mukerji is ringing in her 40th birthday today. The actor is all set to make a comeback on silver screen with Hichki, which will hit the screens this Friday, 23rd March 2018. 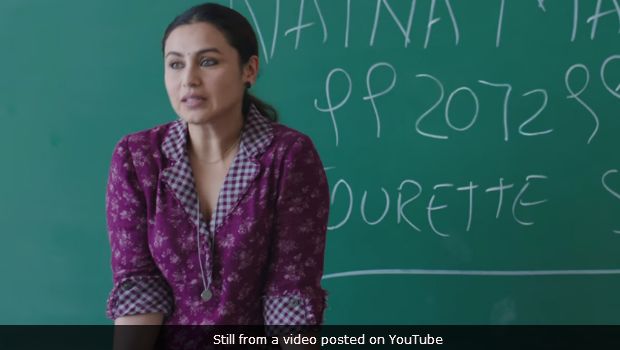 Actor par excellence, Rani Mukerji is  ringing in her 40th birthday today. The actor is all set to make a comeback on silver screen with Hichki, which will hit the screens this Friday, 23rd March 2018.  Rani would be seen essaying the role of a teacher who is suffering from Tourette syndrome - a common neuropsychiatric disorder characterised by repetitive movements or unwanted sounds.

Rani, who is thoroughly enjoying her motherhood, revealed in an interview that motherhood has transformed her completely. She recently hosted a cute birthday bash for her daughter, Adira Chopra, which was attended by many stars and their star babies including Taimur Ali Khan Pataudi and Karan Johar's twins, Yash and Roohi Johar.

In her long spanning career, Rani has charmed the audience with both her fit and fab avatar as well her chubby girl-next door roles. Her strenuous and intense workout for the movie Dil Bole Hadippa and Mardani grabbed quite a few headlines, but she has maintained that her household is essentially a foodie one. Both husband Aditya Chopra and Rani are fond of good food from various cuisines.

Here are some food and fitness secrets of Rani you may not have known.

Rani Mukerji does not believe in crash dieting. Even while she was preparing for her role of a tough cop in Mardaani, she was on a special diet, but was not starving herself. She would eat at small intervals of every 4 hours. Her breakfast would include protein filled dishes, and dinner with soups, salads and grilled veggies. Her mid-meal snack would be fruits, and salads. She also kept herself hydrated throughout the day with various beverages like coconut water and lemon water.

Being a true-blue Bengali, Rani loves her Bengali meal. In fact, a leading news daily also reported that Rani chose to go for a traditional Bengali Godh bharai, instead of western baby shower. In Shaad-Bhakkan (Bengali baby shower), mothers-to be are pampered with a thali full of their favourite food. The mother-to be is expected to finish her entire plate, without leaving a single grain on her plate in the end.

During Rani's occasional Durga Puja Pandal outings, she assumes the role of serving bhog to the onlookers and guests. She enjoys a plateful of khichdi, begun bhaaja (baingan), tamatar chutney and payesh (kheer) herself with her family, which makes for a great photo-opportunity for the media each year.

(Aslo Read: How to Turn a Fitness Goal into a Lifetime of Good Health)

Did you know Rani is a trained Odissi dancer? She also took proper training of cricket for her role as a cricketer in Dil Bole Hadippa. She was following a high intensity workout for her role in Mardani.

Rani is an avid Yoga practitioner. She practices yoga 3-4 times a week for about an hour. She practises multiple suryanamaskars (about 10 every session) and according to her yoga trainer, she is quite a pro with all her postures.