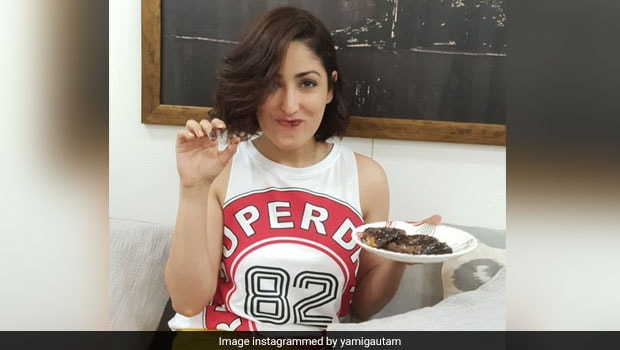 Bollywood actor Yami Gautam turns 30 today and the beauty is celebrating her special day by revealing some facts about herself on Instagram. Gautam, who is going to be seen opposite Vicky Kaushal in the upcoming film Uri, is a self-confessed chai lover, as is mentioned in her Instagram bio as well. Today she shared with her Instagram followers that she is a foodie as well. Yami is often seen sharing pictures of herself indulging in delicious treats on her Instagram page. She is also quite a big fan of travelling around the world and her sister Surilie is most often seen as her travel companion. So then how does the incredibly fit Yami Gautam maintain her toned physique? That is possible through a rigorous fitness and diet routine, of course, and Yami Gautam makes sure she follows both sincerely. After all, you don't just end up with as svelte a figure as Gautam, without doing anything!

As mentioned earlier, Yami Gautam loves to travel and like most Bollywood celebrities, the beauty was in London this winter with her sister and she couldn't help but get her hands on some warm waffles with hazelnut sauce. She posted a picture of herself with the waffles on Instagram, saying, "My favourites ... Surilie,, Nutella Waffle n this chilled London weather."

But not all days are full of sinful indulgences for Yami. The Kaabil actor had revealed during a press conference that she believes that both diet and workout are important for maintaining a healthy weight. "You workout in the gym for one and half hours and then eat a plate of sev puri. That's not how it works", she said at the event. She revealed in an interview with Pinkvilla that she starts her day with a glass of water and also has a pre-breakfast regime where she eats some fruits, nuts and green tea. For breakfast, she revealed she eats besan chilla with vegetables or nachni paratha (made from ragi). She revealed that she eats nuts except cashew nuts, which she says she found 'a bit heavy'.

Post workout, Yami Gautam eats protein-rich foods like paneer or soyabean nuggets. She said in the interview that she has replaced rice in her diet with quinoa and that as an evening mid-meal snack she ate fox nuts or a salad. Like any die-hard chai fan, Yami Gautam revealed that she finds a way to squeeze in some adrak waali chai in her daily diet. She also said that she never skips a meal.

Yami Gautam is an early riser and does a lot of functional training, although the actor has been spotted posing with weights a number of times, as is suggested by her Instagram feed. Gautam said that for picking the right fitness routine, one needs to know their body well. She makes sure that after a session of indulgence, she works out to burn those calories off, as she did even during her London vacation. Gautam also likes to dance and she loves pole dancing. Here's a video of Yami Gautam showing some incredibly difficult pole dancing moves, inspiring us to get fit:

Pole dancing is a great fitness workout, as it strengthens your core and makes your body more flexible and agile. Needless to say, Yami Gautam's level of ease is difficult to achieve and needs a lot of practice. Well, we wish Yami Gautam a very happy birthday and hope she keeps sharing her love for food and fitness with us!