History of French Fries: All About The Origins of the World's Favourite Potato Fritters

If you have been crediting a certain Frenchmen for the crispy goodness, you may want read its twisted history. 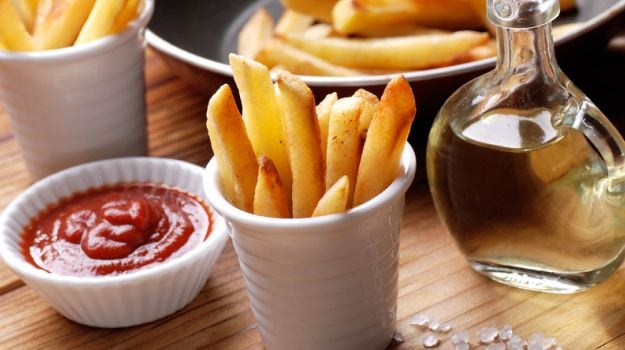 Thin, crisp and oh-so indulgent, there is nothing quite as addictive as French fries. The deep fried potato fritters have caught the fancy of foodies for centuries, across continents and have established themselves as the best sidekick to so many dishes. On its own too, French fries could be quite a snack to munch on. Smeared in Ketchup, mayonnaise or an array of sauces and dips, French-fries make for our most favourite go-to snack in times good, bad and ugly. True, there is a lot of credit due to the person who came up with the ingenious idea to fry the potatoes in such a way, but if you have been crediting a certain Frenchmen for the crispy goodness, you may want read its twisted history.

French fries could be Belgian

Several historians claim that what we enjoy today as French fries, may not be a French creation but a Belgian one. According to them, it was in Belgium where potatoes were being fried in the late-1600's. Belgian villagers uses to slice their fish really thin, fry them and eat them as a snack. But in winter months when the river would freeze, it would get difficult for the villagers to fish. What started out as an alternative paved the way for the creation of our beloved French fries. The villagers near river Muese turned to the tuber and sliced and fried it pretty much the same way as they would fry their fish, and thus the earliest version of French Fries were born. Then during World War 1 when American soldiers chanced upon the fried delicacy, then immediately fell in love with it. Since the dominant language of southern Belgium is French, they dubbed them as "French" fries and the name stayed.

There are a set of Historians who claim that French fries are indeed French. First sold by street vendors on Paris's Pont Neuf in the 1780s, the thin potato fritters were one of the most sold items before the outbreak of French revolution. Potatos were a means of sustenance for citizens who didn't have the privileges enjoyed by the clergy or nobility. Potatoes were promoted as a common man's food in France by Antoine-Augustin Parmentier, but he did not mention anything about French fries in particular.

How the Americans added to the confusion

According to the manuscript by President Thomas Jefferson written in early 19th century- he talks about Pommes de terre frites en petites tranches" ("Potatoes deep-fried while raw, in small slices"). Historians claim that the recipe came from French chef, Honoré Julien. And by 1850's, the recipe became one of the mainstays in the popular American cookbooks as 'French Fried Potatoes'.

It is said, President Thomas Jefferson had "potatoes served in the French manner" at a White House dinner in 1802. Historians claim that the expression "French fried potatoes" first occurred in print in English in the 1856 work Cookery for Maids of All Work by E. Warren. The new style of 'French frying' the potatoes was meant to refer to the thin, shallow-fried slices of potato. To draw a certain sense of distinction in skinny and deep fried vs. fat and pan fried.

Love for French Fries across the globe

French fries are a common side dish to burgers, fried chicken, grilled steak and fried fish. In Belgium people often team their fries with cooked mussels or with a fried egg on top. Fish 'n' chips is one of America's favourite style of having them. In the Middle-East, French fries find its place in the pita bread with other fillings to make a wholesome snack. Poutine is a famous dish hailing from Canada and America consisting of french fries and cheese curds, topped with lip-smacking brown gravy.