How Exercise Can Keep Depression at Bay 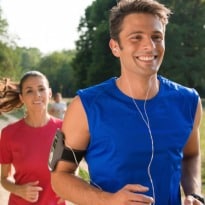 What can you do when you're feeling low or down in the dumps? How do you shake off that gnawing depression without having to consider therapy or some form of medication? According to a new research that was published in the journal 'Cell', one way to snap out of stress-induced depression is by exercising.

Researchers at Sweden's Karolinska Institute in Stockholm found that exercise triggers changes in the skeletal muscle that can purge the blood of a substance that accumulates during stress and harms the brain. Jorge Ruas, principal investigator from the Karolinska Institute in Sweden said, "Skeletal muscle appears to have a detoxification effect that, when activated, can protect the brain from insults and related mental illness."

Studies in the past have suggested that exercise helps people feel more positive as it releases endorphins in the body. It now appears that exercise also helps produce an enzyme that clears out the molecule linked to depression. Researchers studied mice and muscle biopsies of exercising humans to uncover the fact that exercise wards off depression and stress.

Listen to the latest songs, only on JioSaavn.com
Researchers had known that exercise prompts the production of protein PGC-1α1 in skeletal muscle but were unclear about what it was doing. To figure out the answer, they genetically engineered mice to have high levels of the protein and exposed them to a stressful environment with flashing lights and loud noises. They repeated the same experiment with a group of normal mice as well. After five weeks they found that the normal mice were depressed and the genetically engineered ones seemed to be composed.Ruas explained, "Well-trained muscle produces an enzyme that purges the body of harmful substances. So in this context the muscle's function is reminiscent of that of the kidney or the liver."

CommentsResearchers discovered that mice with higher levels of PGC-1I1 in muscle also had higher levels of enzymes called KAT. KATs convert a substance formed during stress (kynurenine) into kynurenic acid, a substance that is not able pass through blood to the brain.  Further study of this subject may open new doors that can define simpler ways of dealing with depression. The authors concluded by saying that the fact that exercise can drive away both stress and depression is great but how can one mimic this effect without actually exercising is the challenge.