How to Cook Perfect Sauteed Potatoes 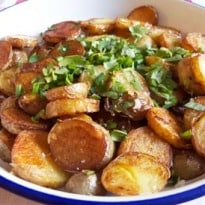 Are sauteed potatoes even better than chips or just bubble and squeak without the cabbage?

I was somewhat puzzled when sauteed potatoes appeared on the list of suggestions for this column. For a start, the highest form of fried potato is clearly the chip. And moreover, I had severe doubts as to whether anyone would bother to cook such sad little cubes of greasy potato at home. Beloved of the budget buffet, they're only one step up from a frozen potato croquette - and, in my book at least, a less attractive proposition. Sauteed potatoes may take their name from the French "to jump" (thanks to the action of tossing them in the pan), but I certainly wasn't leaping into action on this one.

But, in deference to my esteemed editor, I grudgingly did a bit of research, and lo, I realised there are two sorts of sauteed potato, just like, I suppose, there are good croquettes and bad croquettes. There's the rubbish kind, soft and beige and oily, and there are the golden boys, crunchy and hot and generously seasoned, half way between crisps and chips, and nearly as delicious.

Larousse Gastronomique includes two recipes, Gordon Ramsay has described them (erroneously in my opinion) as "beating chips any day" and even our very own Michelin-starred Angela Hartnett has her own take - so sauteed potatoes must be worth our consideration after all. But how do you make them nice?

Most recipes for sauteed potatoes call specifically for a waxy variety: Ramsay suggests Charlotte and Anthony Bourdain Yukon Gold (more common in the States than here). Good Food magazine recommend that solid all-rounder Desiree or the more floury Maris Piper, and Raymond Blanc bucks the trend entirely by using King Edwards, described by the Potato Council (how I'd love to sit on that) as having a "fluffy texture". Because Blanc fries the potatoes from raw, rather than pre-cooking them (of which more later), they don't fall apart in the pan as I'd feared, but the texture is definitely more Boxing Day leftovers than smart French restaurant. The solidity, and buttery flavour of the Charlottes works far better here.

Julia Child directs me to cook my pommes de terres sautees whole - although I am required to carve them into "elongated olive shapes, 2 to 2½ inches long" first. Ramsay simply cuts them in half, while almost everyone else suggests slices from 5mm (Michel Roux Jr's A Life in the Kitchen) to 1cm (Marcus Wareing's How to Cook the Perfect ... ). Blanc goes for 2cm cubes, and Good Food sticks with the comfortingly non-specific "chunks".

The greater the surface area, I realise, the greater the opportunity for crisping - so Roux's thin slices prove ideal, allowing just enough room for a contrast in texture between the inside and outside of the potato. The squares remind me unpleasantly of my old enemies from the buffet and are disqualified on aesthetic grounds, and Child's whole potatoes, though elegant on the plate, are basically just steamed with a disappointingly thin veneer of golden crust.

Peel or no peel?

The waxy potatoes available here are often picked while they're small enough for salads, with skins as thin and delicate as a cobweb - peeling is definitely optional as far as I'm concerned. Child recommends it, as does Bourdain, while Roux boils them in their skins, presumably for reasons of flavour, and then peels them before frying. Wareing, Ramsay, Good Food and Blanc all leave them on - and I think they're right. It's not just a question of laziness (although that does come into it): the ragged skins crisp up beautifully, giving the sauteed spuds a more interesting texture.

Sauteed potato chefs split into two camps: those who cook them before frying, and those bold souls, like Bourdain, Blanc and Child who seize the bull by the horns and fry them from raw. Although in the long run this is probably quicker, it is considerably more effort: raw potatoes burn easily on the kind of heat required to brown and crisp them, yet they seem to take an age to cook through. In fact, the whole operation is actually quite stressful, and after all that, the results seem greasier and less crunchy than the par-boiled kind, presumably because even a waxy potato has a little fluff when cooked, helping the cut sides to crisp up nicely in the hot oil.

Parboiling them, as Ramsay suggests, runs the risk of uncooked potato beneath that perfectly golden exterior - they should be almost tender, although it's better to err on the firm side for ease of slicing.

Cutting the potatoes before boiling, as BBC Good Food suggests, is a false economy: they cook more quickly, but the smaller pieces are more readily waterlogged, and starting with a dry potato is vital for really crisp results later, as Ramsay makes clear. Put them back in the hot pan to steam for a moment, just to make sure, then allow to cool slightly before frying, not only to save your fingers but also to maximise the drying time.

Olive oil is the most common choice of frying medium; unlike butter, it won't burn at these temperatures, and if you miss that rich flavour (this is a French classic, after all), you can always add a knob of butter at the end, as Wareing, Blanc and Ramsay suggest.

Anthony Boudain sautees his potatoes in bacon fat, rendered from lardons cooked alongside the spuds. Bacon dripping is always welcome, but here I think it's just a bit ... well, bacony - and it gives the potatoes a slightly unappetising dirty brown colour. I prefer Roux's duck fat, which he suggests as an "even more delicious" alternative to oil: it makes the slices extra crisp, but with a subtler richness of flavour. Vegetarians should replace it with oil and butter combination mentioned above.

The sauteed potato can be customised any which way you like (Bourdain's bacon, Elizabeth David's onion, Smitten Kitchen's smoked paprika), but the traditional basic recipe almost always features garlic and chopped parsley. Roux adds both right at the end, but I find raw garlic too harsh, and the same goes for Blanc's shallot. Conversely, sticking a crushed clove into the cooking water, as Wareing's recipe suggests, is too subtle - I certainly can't taste it in the finished dish. Cooking a chopped clove along with the potatoes, as Ramsay suggests, runs the risk of burning it: best, I think to, add at the last minute, just to take the edge off that raw flavour.

Chopped parsley is the classic choice of herb, but Child suggests using a mixture of tarragon, parsley and chives which is even better if you have them handy - combined with the garlic, they're France on a plate. Perfect with a steak, a piece of fish, or, indeed, a nice fried egg.

500g small waxy potatoes (Charlotte are ideal)
1 tbsp duck fat or olive oil (if using olive oil, add a knob of butter towards the end of cooking)
1 clove of garlic, finely chopped
2 tbsp chopped parsley, tarragon and chives (or any combination of those three)

1. Put the potato in a pan of well-salted cold water and bring to the boil. Simmer for about 15 minutes (depending on size) until just tender. Drain well, and return to the hot pan to steam for a couple of minutes.

2. When cool enough to handle, cut into 5mm slices. Heat the duck fat or oil in a pan over a medium high heat and then add the potato in a single layer, cooking them in batches if necessary. Season and leave to cook undisturbed until golden brown. Flip over and repeat.

3. Add the garlic to the pan and saute briefly (add the butter at this point if using), then drain on kitchen paper, scatter with herbs and serve immediately.

Sauteed potatoes: better than chips, as Ramsay claims, or only a cabbage short of bubble and squeak? Americans, what's the difference between these and home fries - and everyone, what do you serve them with?