How to Cook the Perfect Pilaf 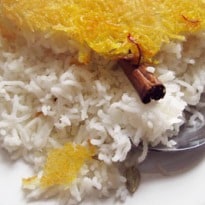 Many consider pilaf rice's finest hour. Do you prefer palau, pilau or plov, and do you have a trick for that all-important golden tah-dig?

Pilaf is an old, old dish, the complexities of which belie the brief definition given in the Oxford Companion to Food: "a Middle Eastern method of cooking rice so that every grain remains separate, and the name of the resulting dish". That separation is the important thing: 13th-century Arabic texts suggest the plump grains should resemble peppercorns - no mush, no stickiness.

This is usually achieved by successively boiling and gently steaming to pilaf perfection, but, as with many such apparently simple dishes, that's not the end of it. Washing or soaking the rice to rid it of any surface starch, which might make it sticky, is common, as is covering it with a cloth, as well as a lid, to protect it from drops of condensation as it steams. Then there's the issue of the tah-dig, literally the "bottom of the pot", a golden crust often fought over at in Middle Eastern households, and often enhanced with egg or pieces of flatbread.

Although thousands of variations on pilaf exist, from Turkey to Turkmenistan, taking in the plovs of central Asia and the pilaus of the Indian subcontinent, adding meat, fruit and vegetables, even substituting the rice for bulghur wheat, I've restricted myself to the simplest version. Lightly spiced, fluffy rice, with a crunchy toasted bottom. How hard can it be?

The rice: a grain of truth

Having ruled out the bulghur wheat variation, I don't find much debate here: basmati seems to be the rule (although I do hear that, in Central Asia short-grain is favoured, I don't find any recipes using it. Claudia Roden says in Arabesque that, although ordinary long-grain can be used, basmati is her preferred choice thanks to its superior taste and the fact that the grains stay "light, fluffy and separate" and I see no reason to doubt her. Basmati is the undisputed king of long-grain rice, and pilaf deserves the best.

I do give a brown rice pilaf a try though - Angela Hartnett's recipe, which uses unpolished basmati. It needs far longer to cook, as is usual for brown rice, but not quite as long, perhaps, as the recipe suggests - I'm all for tah-dig, but the smell of singeing rice alerts me to the fact this has gone too far long before the 40 minutes are up. The rice that I can rescue is nice enough, but the chewiness of brown rice seems at odds with the elegance of the dish itself. Plus it takes me bloody ages to wash up. On that basis, I'm sticking with white.

Rinsing it before use to wash off the starch is common in much rice cookery, although of the recipes I try, only Roden, Gordon Ramsay, Anissa Helou in Saveur magazine and Sally Butcher in Veggiestan recommend it. Indeed, Helou both rinses and soaks for two hours before use, but, although this reduces the cooking time slightly, it doesn't seem to make much difference to the texture.

The plainest pilafs, unenlivened by chunks of lamb tail fat or mutton, are cooked with either just water (Elizabeth David's A Book of Mediterranean Food, Butcher, Helou), or stock. Roden gives the option of either water or chicken stock in Arabesque, as does Ramsay in his recipe for Good Food magazine, Tamasin Day-Lewis water or vegetable stock in All You Can Eat, and Hartnett chicken or vegetable stock in her recipe for the Guardian.

I'm not convinced by the vegetable stock - it's too herbaceous, which I don't think works well with the spices (more elaborate pilaf recipes will suggest a generous garnish of fresh dill or parsley). Chicken adds a savoury richness, but in the end, I decide to let the butter and the rice speak for themselves: you could substitute stock if you wanted to serve the pilaf on its own, but I think water does just fine.

Here I mean only whatever flavourings the rice is cooked with. Fried onion is common, and used by Day-Lewis and Ramsay, who are also quite similar in their use of cardamom, cinnamon and bay leaves (the latter adds cloves and lemon zest for good measure). Helou goes for saffron. I love the way the cardamom and cinnamon perfume the rice, and the fragrant zest is inspired - I notice she adds crystallised and raw orange peel to her finished Iranian shirin polow, and this seems like a more subtle variation. The saffron gives the rice a pleasingly warm colour: it's not a must for a pilaf, but on a special occasion, it seems worth pushing the boat out for. I'll be ditching the onions though: their melting texture is at odds with the perfect fluffiness of the rice.

Many pilaf recipes start in much the same way as a risotto: rice is stirred into hot fat, and left to absorb a little before the liquid element is added. Butter or ghee are popular, used by Ramsay, Day-Lewis and Roden (although she adds the butter to the boiling liquid instead), while Butcher suggests ghee or oil, Helou canola oil, Hartnett olive oil and David dripping or oil. I don't like the stolid flavour of the dripping with my lovely fragrant fluffy rice, and the oil seems to be just a lubricant. Butter or ghee give a far richer result - I'm going for butter, because I think it tastes better.

Which is where things get really interesting. The simplest method I find is David's suliman's pilaf, subtitled "one of the most comforting dishes imaginable", where the rice is fried briefly in dripping then topped up with lots of boiling water and cooked for 12 minutes. No lid means no steaming, and although it's quick, the drained rice is damp when it goes back into a pan with toppings including pine nuts, tomatoes, garlic, onion, chopped mutton, currants and sultanas, all sauteed in dripping "with plenty of seasoning". As I mix, it turns into a rather sticky mush.

The other slightly strange recipe comes from Ramsay who, after coating his rice in butter and covering it with boiling water, bakes it at 180C for 25 minutes. Admittedly, it's tasty enough, but there's no bottom crust, and the results are at the less fluffy end of things.

Butcher cooks the soaked rice in boiling water for 7 minutes until al dente, then drains and returns to a pan coated in sizzling ghee, along with 2 tbsp water. This can then be covered and left for 35 minutes. Helou adopts a slightly similar, but more complex method, boiling it for 12 minutes, draining, and then returning the pan to the heat with saffron, milk and oil, and steaming the rice for 15 minutes. She then adds melted butter and a cup of boiling water, covers again, and cooks for a further half hour. Both poke holes in the rice before covering, to help steam to escape.

Roden, meanwhile, adds the butter and rice to boiling water, covers, and cooks undisturbed for 18-20 minutes. Day-Lewis toasts the rice in butter first, then follows essentially the same method. Both are far simpler and quicker than the par-boiled versions, but lack the crunchy base and fluffy rice of Butcher's and Helou's pilafs. Of the two, I prefer the less buttery, simpler, drier style of Butcher's dish. Handily, it's also easier. Wrapping the lid in a tea towel, as she suggests, does indeed help prevent drips too.

Achieving that all-important tah-dig without resorting to adding extra ingredients is a delicate process. Butcher suggests immersing the bottom of the pan in cold water to dislodge it in one gorgeous golden piece. (She also gives various other things you can add, from yoghurt to potatoes, but I suspect this is beyond my remit.) This works perfectly: if only I'd known about it when making the brown rice version ...

1. Rinse the rice thoroughly and tip into a large saucepan of boiling, salted water. Stir, bring back to the boil, and cook for 7 minutes.

2. Drain well and season to taste. Meanwhile, melt the butter in a clean pan over a medium heat then add the spices and lemon zest. Cook for a minute, then add 2 tbsp water and a layer of rice. Heap the rest on top in layers, making sure not to push it down. Make 5 air holes in the surface with the handle of a wooden spoon, wrap a lid of the pan in a clean tea towel and cover. Cook over a very low heat for 30 minutes.

3. Have 5cm of cold water ready in the sink. When the rice is done, plunge the pan into the water and leave for a minute, then turn the pilaf on to a platter.

Is pilaf rice's finest hour or do you prefer it fried, baked or boiled with milk and plenty of sugar? Which country does the best version: do you prefer palau, pilau or plov?