How to eat: nachos 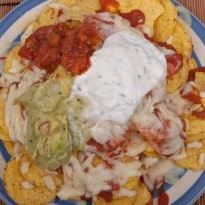 Nachos are one of the titans of trash food. But do you serve them with chilli or pulled pork? Drown them in cheese sauce? Or grilled Monterey Jack? And can you share your nachos or is that a surefire recipe for divorce?

Buenos dias, amigos. This month How to Eat - the Word of Mouth series debating the best way to eat our favourite dishes - is going down old Mexico way ... kind of. Advocates for Mexican food must despair that a dish created on-the-fly by a harassed maître 'd is one that defines Mexican cuisine for a global audience, but such is the popularity of nachos. A matter of assembly rather than cooking, which is a big part of its appeal, Ignacio Anaya's creation is, in many ways, the definitive, filthy fast food. One that is as big in Britain's bars, cinemas and student halls as it is in Ohio baseball stadiums, with just as many interpretations available. Which can't be right, can it? Because, as regular readers of this series know, there is only one acceptable way to eat nachos, and that's this way.

Like tomato sauce or (sorry, Felicity Cloake) baked beans, life is too short to make your own tortilla and then fry up batches of chips. When conscientious cooks do, in fact, the results are often too big, too thick and rather greasy. The boffins of industrial food processing have spent years perfecting the tortilla chip, so let them have this moment. If using proprietary snack foods in your cooking is good enough for Ferran Adria, it is good enough for me.

That said, be sensible. The chips are meant to be a background canvas of toasted, corny carbs and salty twang. They are not meant to be a distinct flavour in their own right. Therefore, avoid any sour cream and chive or chilli/lime-spiked chips and choose a bag from a point on the spectrum between "lightly salted" and Doritos Cool Original.

Yes, despite the ubiquity of the "nacho bowl", use a plate. A bowl might be an economic way for professional kitchens to serve nachos, but obviously, given the bowl's depth, it always results in your being left with a thick sub-strata of dry, naked nachos. Instead, lay your nachos out to an uneven depth of one-three nachos across a dinner plate, top liberally with grated cheese and (as some will fall into the cracks and divots), you will achieve a thorough horizontal cheese coverage and partial vertical penetration. The result is 3D, surround-sound cheese. Whichever way you attack it, thereafter, you will get some in each mouthful. Being ultra-fastidious, you could layer your chips and cheese a couple of times, grilling at each stage, but, frankly, that seems OTT. Particularly when a certain hit'n'miss variety (a naked, grill-charred nacho here; a cheese glut there; a blob of Monterey Jack melted to the plate that you have to scrape off last), is all part of the fun.

No cheese sauce. Ever. Got that? And, by that, I don't just mean that skinning-over, chemically processed, glow-in-the-dark gloop you get pumped over your nachos at the local cinema. You could make the most elegant bechamel cheese sauce with a fine artisan mature cheddar and the contrast of hot, silky sauce on, alternately, brittle, woody and now sopping-wet tortilla chips, would still be deeply unpleasant texturally. Save your cheese sauce for pasta.

You want some resistance, the pleasure of pulling apart gooey strings of cheese between clumps of nachos. So, instead, use a grated mix of three cheeses: Monterey Jack (for meltability), red Leicester (for colour) and cheddar (for flavour). Don't waste good cheese here, though, and don't use a bullying, overly tangy cheddar. It should be a layer of flavour, not the star of the show.

As with pizza, you can put anything on nachos. But that doesn't mean you should. On the fringes of sanity you will see people dressing their nachos with everything from kimchi to jerk chicken. Of the more commonplace toppings, I am saying a firm "no, gracias" to the following: refried beans (great adhesive if you are tiling a kitchen floor, otherwise mystifying); olives; mayonnaise; sweetcorn (perennially unwelcome); lettuce (see, "lighter nachos"); fried onions; a spritz of lime (sounds right, sounds Mexican, but in reality a jarring idiocy when used so haphazardly); any herbs; chorizo; pepperoni. In fact, I find any meat in this context (ground beef, BBQ chicken, bacon, even the pulled pork which people insist on putting everywhere, these days), unnecessary if not actively off-putting: often unwieldy, dried-out, too filling.

Beef chilli is the exception of course, but I would argue that, ultimately, it is better served over rice. Line a bowl of chilli with tortilla chips - much less pour the chilli over a plate of nachos - and they soon get waterlogged. Some limp chips is great, for variety. All limp chips isn't. Personally, I say forgo meat altogether. The undisputed Holy Trinity of toppings is guacamole, salsa (a fresh, clean blitzed pico de gallo, preferably) and sour cream. Top with sliced jalapenos to taste. In terms of complementary textures, contrasting temperatures and a to'n'fro of deliciously fatty, zingy and hot, pickled flavours, you have everything you need, right there.

Note: while nachos is the lazy cook's cop-out, it will benefit enormously from homemade fresh salsa and guacamole. The long-life jarred versions are an abomination.

There are people - frigid, sexless husks of humanity tormented by issues of taste and decorum - who insist that guacamole, salsa and sour cream should be served on the side, in little pots, so that a) you can get an equal little dip of everything, as you see fit, and b) you won't get messy. What next? Eating nachos with a knife and fork?

Making sure that every nacho is covered with a dab of each component is not the aim. Instead, spoon the guacamole etc, into three "pools" on top of your cheese-topped nacho mound. You can then move and dip between them as you see fit, before, finally, revelling in the intensity, the gastronomic multiple orgasm of, how, as you finish your plate, that leaves three small nacho zones drenched in cream, salsa or guacamole. Each is different, each is a sensational pay-off.

And how do you eat it all? With your fingers, of course. It's pig-out food. Grab the kitchen roll and get stuck in, digging into and prising apart nachos with your bare hands. If you don't end up sucking delicious debris from your fingers, you haven't been doing it right.

In a parallel universe - one populated by the attractive young professionals you see in Old El Paso adverts - it would be possible to convivially share nachos. In real life, it is fraught with tension, as the combatants (that is the only way to describe them) jockey for position, hog the sour cream, try to distract their adversary from the most cheese-laden nachos and then, in a way that disgraces us all, end up squabbling over - of all things! - the last dregs of the salsa.

Instead, you need your own plate of nachos. You may, like a UN special observer, want to be present in the kitchen to watch over the initial cheese distribution, to ensure that it is fair. That is your right, but, after the breakdown of my last marriage, I try not to interfere too much.

This is an evening meal. A Sunday special for those nights when, after manfully struggling through the day on little sleep and with a chronic hangover, you need to fall into the warm loving embrace of stacks of fat and far too many carbs. Sat in front of the telly on the sofa. Basically, when the existential horror of Monday morning is bearing down on you like a 57ft projection of Edward Munch's The Scream, only nachos (and alcohol) can blot it out.

A note on light nachos

No such meal exists. Grilled tortilla, half-fat creme fraiche, no guacamole and a handful of cheese, do not nachos make - no matter how much (woo!) salsa you treat yourself to. With nachos, you've got to be in it to win it. You've got to go lard or go home. Only eat it twice-a-year if need be, but go all-out.

A note on etiquette

If you are British, please avoid the phrases, "loaded nachos" or "all the fixings". You are not a character in American Pie.

Wine would be wasted and water's a vibe-killer. There is a hell of a lot of grease on that plate, so you need something carbonated, a tongue-scrubber: diet Pepsi or Coke (full fat's too sickly) or a lighter, paler beer, a good lager or blonde ale. This is no time to break-out and waste your big hop-bomb IPAs.

So nachos, how do you eat yours?