How to Make Perfect Cheese on Toast 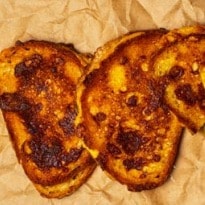 Buttered or not? Grated or sliced cheese? Jeremy Lee of Quo Vadis has all the answers.

While marooned on Treasure Island, Ben Gunn sustained himself by dreaming of toasted cheese. It was foremost in his mind upon meeting Jim Hawkins and has propped up many a failing soul in real life as well as great adventure stories.

Toasted cheese is curiously particular to eating at home. My father was adamant that the cheese be sliced thinly and overlapped, to melt all the easier. Sliced too thick and scorching was almost certain. What about grated cheese? "No," came the reply. "Too much falls over the sides while heat fights to the centre of the heap."

Good white bread of a lighter structure is best. Sourdough burns too easily along the crust. Toast both sides and liberally butter one side. Lay thin slices of cheese over the buttered toast ensuring no bread is left showing, to prevent scorching. Place the slices under a feisty heat and the savoury is complete when the cheese is bubbling. Now add the vital addition of Worcestershire sauce and freshly milled black pepper. Once plated, it must be eaten immediately, the surface bubbling from the heat of the grill.

The best Welsh rarebit I ever had was when beginning my apprenticeship as a cook in London at Boodle's, a gentleman's club in St James's. The head chef, Keith Podmore, had a recipe that required the considerable reducing of stout which was then thickened in a pan with thoroughly cooked flour and butter, enriched with a great heap of grated cheddar, a dollop of mustard, much Worcestershire sauce, plenty of pepper and a couple of egg yolks. The subject of egg yolk is contentious.

Pour the stout into a pan and simmer briskly until 4 tablespoons remain. Melt the butter in a heavy bottomed pan over a gentle heat. To this, add the flour and stir well. Cook gently until the colour begins to deepen to a pale gold. Pour in the reduced stout stirring well. When smooth and cooked a few minutes more, stirring all the while, add the mustard powder and the Worcestershire sauce. Beat well off the heat, add the cheese, and when cooled, add the yolk(s). Toast the bread well, butter and spread on the cheese. Place under a hot grill until bubbling.

The best bar snack in the world

There is another very good combination of bread and cheese: the sandwich served at Harry's Bar in Venice is arguably the best bar snack ever created. As a homage, I do a variation with Ogleshield, a superb British unpasteurised cow's milk cheese created by Jamie Montgomery in Somerset. It is rather good.

Put the cheese, egg yolk, mustard, Worcestershire sauce and cayenne in a food processor and process until smooth. Season with salt. If the mixture is too thick to spread easily, thin it with a little cream. Spread the cheese mixture over one side of the bread slices. Arrange the ham over the cheese on half the pieces of bread and invert the remaining bread over the ham. Press sandwiches firmly together.

Film the bottom of a heavy skillet with oil and heat it over a medium-high heat until very hot. Add as many sandwiches as will fit in the pan and fry, turning once, until they are golden brown and crisp. Repeat with the remaining sandwiches, adding more oil to the pan if necessary. Cut the sandwiches in half and serve hot, wrapped in a paper napkin.