How to Make the Perfect Cup of Coffee 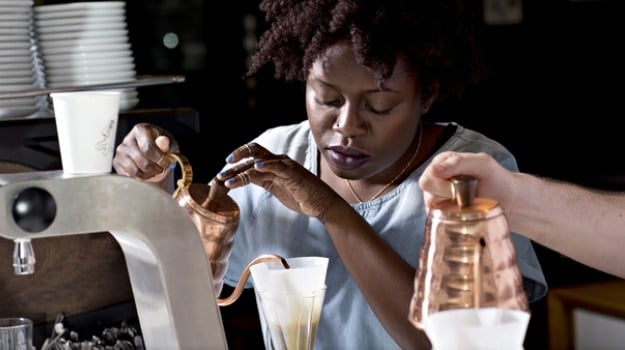 Do you gulp down a mug of instant every morning, but dream of preparing the best barista-style espresso at home?

To say that I know nothing of consequence when it comes to coffee would be a gross understatement. Here's what I'm sure of: it's a hot drink, it contains caffeine, which makes it popular among office workers and drunk people who need to sober up fast (in the movies at least), and in my experience people get overly emotional about it.

Of course, that could be because I only ever had instant coffee at home; I bought my first cafetiere a few months ago, and had to go to YouTube to watch a "how to" video to work it. It goes without saying that I come from a tea-drinking family. And if I was going to become an urbane coffee-drinker - a step above the Gold Blend couple of the 80s, at least - I needed help.

Enter Curators Coffee Gallery, and its Brewed Coffee class. Curators Coffee started life just under three years ago, the dream of some coffee-loving Australians. Catherine, one of those Aussies, is running today's class.

Alongside me are three coffee enthusiasts - I can tell because their questions display actual knowledge, and aren't of the "what exactly is that?" variety, like mine - all eager to soak up all the information Catherine (assisted by a trainee barista, Adrian) has to offer.

The first thing we do, after nibbling on the cakes laid out, is talk about coffee itself. What you're looking for is balance: perfect coffee has no sharp notes, and every barista dreams of the "god shot", ie the Platonic ideal of an espresso. This all depends on the beans, the water and the equipment.

"Beans are basically alchemy," Catherine tells us - they transform through the roasting process. This can mean flavours are inconsistent and change with time. "Don't forget that coffee goes stale," she says. "Ideally you want to drink it within a month after it's been roasted."

She suggests buying beans whole and only grinding what you need, when you need it. Someone asks about freezing, but Catherine isn't a fan. "Pre-portion and store as whole beans, and then grind as you go."

As for the water, like many urban areas in England, London has hard water, and she recommends buying a water filter for the smoothest coffee.

Then we get on to the actual brewing. Catherine teaches three methods in her class - cafetiere or French press (which seems simple but requires precision); AeroPress; and the "drip brew" or "pour over" method. There are four things to watch when brewing: temperature, agitation, brew time and grounds particle size. To brew great coffee you must master all of these, and with practice comes perfection.

As Catherine says with a smile, "brewing coffee well is like science."

Catherine measures out 30g of coffee beans, then grinds them, as well as 500ml of water. "Sixty grammes of coffee per litre of water is a good guideline - adjust it to the size of your group," she explains, before preheating her cafetiere. In goes the coffee and the water at 96 degrees, tested with a thermometer. Immediately a crust, called "the bloom", forms. As the coffee gives off steam the crust sinks down, leaving behind a foam of bitter oils, which we remove with a spoon. Finally, after brewing, it's time for a "nice, even plunge" before decanting. The result is a rich tasting coffee, though slightly powdery - apparently because the filters can let through a small amount of coffee grounds.

Tip flavours are released at different times, so the brew time matters.

Total brew time? 90 seconds; a coarser grind can be brewed for longer and vice versa

I'd never even heard of an AeroPress, let alone seen one, but bearded, tattooed baristas compete every year in the World AeroPress Championships in Seattle. Coffee from the tubular, plastic AeroPress is judged on aroma, flavour, acidity, sweetness and more.

Catherine likes hers so much, she takes it on holiday, to the bemusement of her husband.

Again, we preheat our equipment, heat the water, then brew the coffee for 90 seconds, before forcing the liquid through the paper filter. The key once more is a nice and consistent push, otherwise the quality of the extraction is compromised.

The coffee is my favourite of the night - smooth and very rich. The downside to the AeroPress is that it only makes two cups at a time, so it's not much use for a group.

Tip use a metal filter instead of a paper one to let more oil through for extra flavour.

How difficult? Requires practice for proficiency

The Chemex was another piece of equipment I'd never seen before - a beautiful glass flask with a paper filter (trivia fans: there's a Chemex in the very first episode of Friends in 1994). Catherine taught us how to fold the filter into a cone, and how to position it in the vessel. We fill it with our coffee grounds, then let the first pour of 60ml sit for 30 seconds, before adding a series of small pours around every 40 seconds, waiting for the water to drain through. This coffee was light and clean-tasting. If you're a bit of a showman, it can't be beat - I felt like a magician, except the hat was the Chemex, and the rabbit was delicious coffee.