How to Make the Perfect Pina Colada 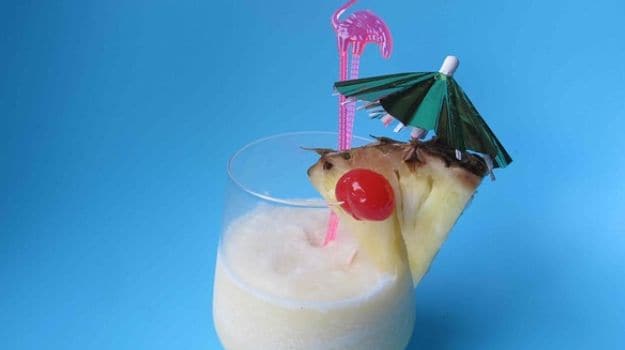 With or without cherries and novelty cocktail sticks, this tropical drink’s a winner. But should you go for dark or light rum? Coconut water, coconut milk or something else? And how many paper parasols can you get away with?

There are two types of people in this world: those who admit to liking pi"a colada, and pretentious idiots. Even the great mixologist Tony Conigliaro names it as his guilty pleasure " as if this totally tropical taste were something to be ashamed of. Victoria Moore hits the nail on the head in her book How to Drink: "At some point around the 1980s "... pi"a colada stopped being a drink and became an excruciating razzmatazz of an event guaranteed to arrive at your table like a carnival float, in an obscenely large glass, decked with thrillingly garish paraphernalia such as a fuchsia paper parasol or six." While I'm not averse to the odd parasol, or indeed a flamingo-shaped stirrer, she has a point.

'Twas not ever thus. Invented in a luxury hotel bar in Puerto Rico in the 1950s for wealthy tourists looking for a taste of the Caribbean, I imagine early customers were more Don Draper than Shirley Valentine " indeed, Hollywood legend Joan Crawford apparently claimed the Caribe Hilton's creation was "better than slapping Bette Davis in the face". With such great ingredients, it shouldn't be hard to restore the drink's faded glamour. After all, there is nothing inherently naff about pineapple, coconut or rum " and the jury is still out on those parasols.

That said, Conigliaro's recipe falls at the first hurdle in using cacha"a instead of rum, which disqualifies it from the classic colada race. Fellow bartender Dale DeGroff says the trick to making a great pi"a colada is to use both light and dark rum, Moore goes for the golden kind, telling readers to use "a richer, more aged rum if you like the sunny flavour to show through", or "a white rum if you prefer the coconut and pineapple to dominate" " which is exactly what Larousse Cocktails, Food52 and Jason Wilson of the Washington Post opt for. Richard Godwin, meanwhile, gives two pi"a colada recipes in his new book The Spirits, one using light rum and one using a mixture of dark and coconut rum ("the proper stuff, like Koko Kanu, not Malibu").

Just as I'm wondering how many different rums it's decent for one woman to have in her collection, I spot that he has helpfully included instructions on how to make your own coconut rum by fat-washing light rum with coconut oil, which provides surprisingly easy and effective, though it's a subtlety that would be lost in the classic recipe using coconut milk rather than coconut water. In any case, it seems a shame to use a mild-flavoured light rum " it has no chance against coconut and pineapple " but the dark one in DeGroff's recipe feels too heavy for a drink that is crying out to be sipped on a sunlounger, so I'm going to use golden rum.

Pineapple is non-negotiable (unless you're a maverick, like Conigliaro, but as we've established, he's already been disqualified anyway). Moore reckons "it's not essential to use fresh fruit to make a decent pi"a colada, though it certainly adds to the drama if you do" so I try her recipe with tinned pineapple rings, and save the fresh stuff for Wilson's recipe. The others all use pineapple juice instead, which, to my surprise, I prefer. I find the tinned pineapple rings too sweet and the fresh fruit distractingly acidic "... and both rather fibrous. (Wilson says that, despite the name, which means "strained pineapple", it's easier to keep the drink from separating if you don't bother, but his would be better served with a spoon than a straw.) Fresh pineapple juice neatly avoids this problem, and seems to hit the spot flavour-wise, too. Food52 adds a spritz of lime juice and DeGroff adds Angostura bitters, which makes their pi"a coladas particularly refreshing, though you may not need either depending on the pineapple juice you use.

The original pi"a colada calls for a Puerto Rican product known as Coco L"pez cream of coconut, not to be confused with coconut cream, as I discover when I track it down online for Food52 and DeGroff's recipes " this stuff is so heavily sweetened, it's more like a liquid Bounty bar than anything you might put in a Thai curry. Moore, Larousse and Godwin's first version all use coconut milk, and Wilson and Godwin's second an "elegant, cream-free version of the gaudy abomination for self-hating, lactose-intolerant cocktail pseuds", coconut water, which the former claims gives the drink "a much lighter and more complex flavour". DeGroff adds double cream, too, which makes his version deliciously rich " a nice thing to order as a dessert, perhaps, but a bit too heavy for drinking on the beach. The cream of coconut is unpleasantly gloopy, while the coconut water is too subtle " it works in Godwin's second version, because it's a much shorter drink, but I can hardly taste it in Wilson's drink. Coconut milk seems the way to go.

That said, without the cream of coconut, the drink does require some sweetening if it is to mirror the flavour of the original " Wilson's version is disappointingly thin in flavour in comparison with Godwin's one with sugar syrup.

Moore perspicaciously observes that the thickness of the drink is crucial, describing crushed ice as the ideal, though without a sufficiently powerful blender, she suggests serving the drink in an ice-packed glass instead. My blender, despite bold claims of an ice function, is somewhat incompetent at breaking the stuff up, but I find a few stress-relieving whacks of a rolling pin works wonders (on the ice, not the blender, though sometimes I am sorely tempted) " and there really is no decent substitute. Nothing tastes of holiday like a frosted glass full of dangerously alcoholic crushed ice.

More is more when it comes to the pi"a colada; pineapple wedges, maraschino cherries " the more the merrier.

Using enough ice to fill your glass to two-thirds, whizz in a blender until crushed, or place the ice in a clean tea towel and whack repeatedly with a rolling pin, rounders bat or similar, then put in a cocktail shaker.

Stir the coconut milk to make sure it hasn't separated into water and cream, then add to the ice along with the rum and pineapple juice. Whizz or shake until well blended, taste and add the sugar syrup and lime juice as required. Pour into a cold glass.

Cut a small notch in the pineapple and cherry, if using and slot them on to the rim of the glass. Serve immediately.

The pi"a colada: naff or not " and even if you are a fan, is it one of those drinks that's strictly reserved for holidays? Which other retro-classics deserve rehabilitation?