I Wasn't Bowled Over by Soup for the Holiday - Until Now: Recipe 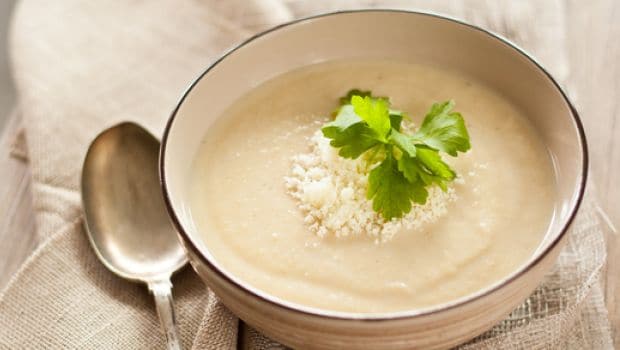 Highlights
Make soup for Thanksgiving? Who does that?

No one I've ever shared the holiday meal with, that's for sure. And so, when the potluck sign-up list came my way, soup was the course I claimed. Who doesn't like the idea of a holiday game-changer?

The sign-up decision was the easy part. Instantly, I felt the anxiety experienced by every cook who's taking food to a dinner party: Will it be special enough? Will people like it? And because it's soup: Will they even try it?

You can look at Thanksgiving soup in two ways: as a pointless meal-opener, an obligatory hurdle that stands between you and the glorious feast. Or as a brilliant first act, a sensory jumping-off point that prepares the palate for what's to come.

I needed that brilliant first act. I needed a masterpiece. I needed help.

Friends, chefs and the Internet came to the rescue with suggestions and recipes, and I started planning my approach. And then I made a lot of soup.

For any course, I think, the biggest challenge at Thanksgiving is picking a main ingredient that won't also be starring in other dishes on the table. A sweet potato soup I tested was wonderful, but too risky; someone is bound to bring a sweet potato something-or-other to the party. Squash soup, pumpkin soup, potato soup - same problem.

Then there's texture and body. I wanted something smooth and velvety, so a chunky mushroom soup and an onion soup I tried didn't make the grade. A white gazpacho made with grapes was delightful but grainy. Creamy is good, but I didn't want something so heavy, so rich, so loaded with dairy that it would put everyone in a stupor before they'd had even the first bite of turkey.And so I finally hit on celery root. Homely and underused, this vegetable makes a smooth, creamy, pale and beautiful soup - full-bodied yet still light - without help from cream or even milk.

One of my culinary heroes, food blogger and author David Lebovitz, had an appealing recipe on his website. But with just celery root and leeks, it seemed not quite nuanced enough. I added a standard fall ingredient - an apple - and substituted apple juice for some of the recipe's water. And I had a winner!

I made two garnishes: a bright green herb oil drizzle for color, and ultra-thin roasted mushroom slices for crunch. But if simplicity is a priority, even just chopped-up apple would work.
Now I've got a killer recipe, and I've answered my own question: Who makes soup for Thanksgiving? Me.

This beautifully pale, silky-smooth soup has advantages beyond its good looks and bright flavor. It can be made in advance; it can be served chilled, hot or at room temperature (we prefer hot); and it welcomes a variety of garnishes (see NOTES, below).

MAKE AHEAD: The soup can be made up to 2 days in advance and refrigerated in an airtight container. For the optional parsley-chive oil, the herbs need to steep in the oil for at least 4 hours and preferably overnight in the refrigerator. The optional roasted mushroom chips (see NOTES, below) can be prepared up to 2 hours in advance; they will soften if allowed to sit for much longer.

Adapted from a recipe by cookbook author David Lebovitz.

For the optional parsley-chive oil: Have a bowl of ice water at hand.

Bring a small saucepan of water to a boil over high heat. Add the parsley and chives; cook for 30 seconds, then immediately drain through a fine-mesh strainer.

Transfer the blanched parsley and chives to the ice-water bath and allow to cool. Drain, and use paper towels to pat the herbs as dry as possible.

Combine the parsley and chives with the olive or grapeseed oil in a blender; puree until smooth. Transfer to a small bowl and allow the mixture to sit at room temperature for up to 4 hours; or cover and refrigerate overnight.

A few hours before serving, pour the herbs and oil into a coffee filter set over a drinking glass or other collection vessel. When all the oil has dripped through (this will take longer than you think), discard the herbs. Transfer the oil to a squeeze bottle, if you like.

For the soup: Heat the butter and extra-virgin olive oil in a large pot over medium heat and stir to combine. Once they are hot, add the leeks and cook for 5 minutes, stirring frequently and adjusting the heat so the leeks do not brown.

Add the garlic, season lightly with salt and stir to incorporate. Cook for about 4 minutes or until the leeks and garlic are soft and translucent but not browned. If the pot begins to brown on the bottom, add a little butter or olive oil.

Add the celery root, apple, broth, water and apple juice. Increase the heat to medium-high and bring to a boil, then reduce the heat to low, so the liquid is moving and bubbling very slowly. Partially cover and cook for about 45 minutes, until the celery root can be easily pierced with a paring knife. Add the pepper (to taste) and the chili powder.

Let the soup cool for a few minutes, then transfer it in batches to a blender - removing the center lid and placing a dish towel over the opening to contain splash-ups - and puree until extremely smooth. (You may use a stick blender, but it won't give you the same silky texture.)

Taste, and add more salt and/or pepper as needed. If the soup is too thick for your liking, thin with a little broth or water.

Serve warm, at room temperature or chilled, drizzling each portion with the parsley-chive oil, if using, and topping with a few roasted mushroom chips or with other garnishes, if desired. (See NOTES.)

NOTES: Instead of or in addition to the parsley-chive oil and roasted mushroom chips, each portion of soup can be topped with a drizzle of plain olive oil; crisped bacon or pancetta pieces; a sprinkle of smoked flaked salt; raw or sauteed diced apple; a dusting of nutmeg; or a few truffle shavings.

To make the roasted mushroom chips, cut 4 ounces of cremini mushrooms (ends trimmed) into very thin slices. Spread on a parchment-paper-lined baking sheet, brush lightly with olive oil and sprinkle with salt; roast in a 400-degree oven for 15 minutes, then turn the slices over and roast for 5 minutes or until they are dry and crisp. Use as soon as possible.