Is Chicken Breast Always Best? | Back to Basics 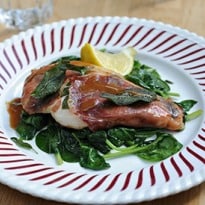 The chicken breast symbolises, for me, the moment Britain started to cook again. After several decades in which the nation completely lost interest in preparing its own food - bedazzled instead by space-age timesavers such as Smash, Pot Noodles and the new cornucopia of ready meals - the mood shifted some time in the late 80s.

Good restaurants began to take off, catering to the luxurious tastes of the new yuppie class. On television, the celebrity chef was born. Gradually cooking came to be seen not as drudgery, but as a rather glamorous form of self-expression.

And for a long time - too long, if you ask me - the thing that everyone cooked was chicken breast. No dinner party was complete without an individual breast for every guest, wrapped in ham, stuffed with sundried tomatoes, or seared to striped perfection on a griddle.

Only the breast; never the other bodily parts. We bought them skinned and immaculate, nestling in vacuum-packed containers. No veins, no sinews, no pimpled skin. No hairy or feathery bits. There was, in fact, nothing animal-like about them. They were moist blobs of pure protein. For a nation unaccustomed to handling raw ingredients - let alone animal carcasses - they were reassuringly ungruesome.

Even now, chicken breast remains Britain's favourite cut of meat. We eat twice as much chicken as we do beef (at the start of the 80s, it was the other way round). That's almost 2m tonnes a year - over half of which is sold as breast meat. Only one-sixth is sold as dark meat: the rest is sold as whole birds, or used by food manufacturers in products such as pies or cat food.

The strange thing about the popularity of the chicken breast is that it is actually quite hard to cook well. One of the most common complaints I hear from novice or nervous cooks, for whom we write this column, is that their chicken breasts are always disappointingly dry.

The scientific explanation for this, as I have mentioned before, is that there are only two ways to cook meat. The first is to heat it to a point where it is cooked, but the cell walls have not burst and released their moisture. The result is succulent (assuming you are not using a tough piece of meat). Chicken reaches this point at just over 70C/158F. The second method is to cook it long and slow in a pot - the cell walls burst, letting out their moisture, but the collagen also breaks down, making the meat creamy and soft as it reabsorbs the cooking liquid. (There is a third way involving low temperatures that achieves both objectives, but this is quite technical.)

Successful cooking of a chicken breast requires the first method - it doesn't contain enough collagen or fat to make slow cooking satisfactory. But a breast is quite a large lump of meat, so it is very easy either to get the outside cooked just right but leave the inside raw, or cook it through and get left with something very dry.

One way to solve this is to use thigh meat: it tastes better and contains a little more fat which makes it more succulent and more forgiving when overcooked. We have used thigh meat at Leon since we opened and wouldn't dream of reverting to breast.

If you insist on breast, however, I would suggest slicing it into smaller pieces - goujons or nuggets. This way you can cook it quickly and keep it succulent without worrying about it being dry in the middle. Primarily however, I would use it when you want to create nice, big, impressive-looking escalopes, as we have done in this recipe. We have also added lots of flavour because, let's face it, most supermarket chicken breasts don't taste of much.

NB: I would avoid baking whole breasts in the oven at all costs unless you have a meat thermometer (in which case, brown them in a pan and put them into the oven at a lower heat then you would imagine - 150C/300F/gas mark 2 - until the centre has reached 72-74C/161-165F).

1 Slice through each chicken breast lengthways into four thin pieces. Put each piece between two pieces of greaseproof paper or clingfilm and bash with a rolling pin or similar object to flatten each chicken portion.

2 Chop the sage leaves roughly and press them into the chicken pieces so each piece is well covered. Dip into the seasoned flour and shake off any excess. Press a slice of Parma ham into one side of each portion, giving it an extra bash so it is well adhered.

3 In a large, shallow frying pan heat the butter and oil together until hot. Place each chicken piece into the pan ham-side down and cook on a medium heat for about 4 minutes. Then flip over and cook for another 4 minutes. Repeat on the other side. Remove from the pan and keep warm. Now fry any extra sage leaves in the fat until crisp. Remove and set to one side.

4 Deglaze the pan by adding the white wine. Turn up the heat and scrape the pan with a wooden spoon. Add the chicken stock and cook for a few minutes until the stock has reduced and thickened. Finish the sauce with a squeeze of lemon juice and season carefully(taste, season a little, taste, season...).

5 In a large pan, heat the olive oil until very hot. Tip in the washed spinach and stir quickly. Season and cook until all the spinach has wilted. Drain.

6 Serve the chicken saltimbocca with the spinach and top with crisp sage leaves.

What else can you do?

• Toss the spinach with cooked puy lentils or white beans.

• Try deglazing the pan with marsala instead of wine for a more scented sauce. Dry vermouth also works well.

• You can also use pork steaks in place of chicken, or the traditional veal. It is quite easy these days to buy rose veal - the male offspring of dairy herds - which has been humanely reared.

You could stuff the flattened chicken breasts with cheese (ricotta, mozzarella or fontina) and spinach (wilted and squeezed dry) before rolling up in Parma ham. Secure with a toothpick and frythem till brown, finishing them off for a few minutes in a medium oven.

Photography: Jill Mead for the Guardian