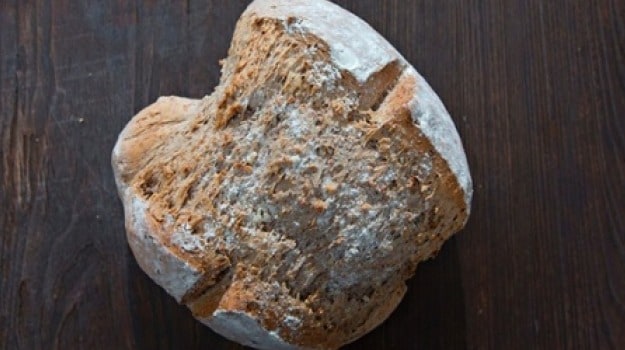 If the kids prefer white bread, just sneak in a bit more wholemeal each time until your loaf is 50/50 - they'll never notice the difference

Bread-baking in my household is a sporadic affair, usually done to relieve a little stress rather than to fill the bread bin. But with two adults, two children and a revolving door of friends, play dates and meetings, it doesn't go to waste. This particular recipe was born of parental guilt about the children preferring white bread despite our best efforts, so I gradually upped the ratio of wholemeal to white flour with each loaf until it was half and half. They didn't comment on the gentle shift, and I'm a happier mama.

You can swap the nuts and seeds for any that take your fancy - I sometimes use almonds and sunflower seeds for a sweeter taste. The dough can also be shaped into six to eight little crusty rolls - bake for 20-25 minutes on a baking sheet instead.

Sift the flours into a large mixing bowl, but add any larger grains of wholemeal flour that won't pass through - that's the good stuff! I rarely sift flour, but wholemeal can be quite dense, so I try to get as much air into it as I can. If you don't want to sift it, just add 15-20 minutes to the rising time instead.

Add the yeast, sugar, salt, nuts and seeds, and give it all a good stir.

Make a well in the centre of the flour mixture, pour in most of the water and give it another good stir. Add more water as you go to form a soft dough. Don't overwork it at this stage, as it will release too much gluten, and become tight and stiff. (If this does happen, add an extra splash of water to loosen it up, cover and leave it to relax for an extra half an hour or so before knocking back and kneading - then carry on as below).

Tip your dough out on to a floured surface and knead for a good few minutes until soft and springy, pushing into it with your knuckles, stretching it out, and turning and folding it. (If you aren't sure how to knead, there are lots of great, simple tutorials on YouTube.)

Shape your dough into a round, lightly dust the inside of your mixing bowl with flour and pop it back in. Cover with a clean cloth or clingfilm, and leave for 45 minutes in a warm place to rise.

When the dough has risen - it should be about twice the size - heat your oven to 180C/350F/gas mark four, dust a baking sheet with flour and pop the dough on top, gently shaping it with your palms. Use a sharp knife to score a line down the middle a couple of centimetres deep, dust the top with flour and pop it in the oven for 50 minutes, until crusty and hollow-sounding when you tap it on the bottom. Remove from the oven and allow to cool.

The bread will keep for about three days wrapped in a food bag and kept in a cool, dry place, or three months in the freezer.