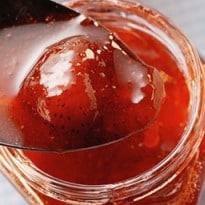 Plans to reduce the minimum sugar content of jam have provoked a national outcry. Is this really 'the end of breakfast as we know it' - or just a storm in a jam jar?

When is a jam not a jam? When it's a "fruit spread", a "conserve" or otherwise falls outside government regulations defining what can be labelled jam. Currently, to be called jam or marmalade, a product must contain a minimum of 60% sugar. But the regulations are set to loosen like a runny conserve as Defra plans to reduce the minimum sugar content of jam to 50%. It is a controversial move that has divided the nation's jam-makers and led Lib Dem MP Tessa Munt to declare that British jam could become "coloured mud". This week, Munt led a Commons debate on the proposals and told the BBC: "This could be the end of the British breakfast as we know it."

But before we declare a national state of emergency and take to the streets to defend our jam, could it be that Munt has, ever so slightly, got the wrong end of the stick? Munt's melodramatic soundbites, and the subsequent reports of Jampocalypse Now, may be premature. Current UK regulations do state that jams and marmalades must contain a minimum of 60% sugar. But the new proposals to cut this minimum down to 50% do not stop producers from continuing to make their jams with 60% sugar or even more, if they desire.

What the proposals do hope to do is encourage exports of British jams by allowing more products to be labelled as such. Defra officials say: "There's not an EU-wide regulation [on the sugar content of jam]." The government hopes to bring UK regulations in line with those of countries such as France and Germany, where it's 50-55%. "There's something called a mutual recognition principle," Defra explains. "To be recognised as jam in France, for example, the product must first be recognised as jam in its home country." This cuts both ways - a French spread containing 51% sugar, say, can be sold as "jam" in the UK because it is sold as such in France, even though the British jams next to it on the shelf have to contain 60% sugar. The proposed changes "will help British producers - large and small - to trade more easily across the world," says Defra.

The move has the backing of many jam producers, including Clippy McKenna, who makes her products using bramley apples to help sweeten and set. McKenna hopes regulations will put an end to what she calls the "jam no man's land. There's currently no law covering what to call products with 51-59% sugar." (Products under 50% must be labelled "fruit spreads".) After being forced to spend thousands of pounds changing her labels to say "conserves", McKenna approached business secretary Vince Cable. Unlike his Lib Dem colleague, Cable appears to be in favour of the proposals, saying earlier this year: "This is exactly the sort of ridiculous red tape we want to do away with ... the only thing stopping it being called jam is some outdated rules."

But will the proposed changes really cause an increase in demand for British jam and marmalade abroad? Baking expert and World Marmalade Awards judge Dan Lepard is sceptical: "It's pointless fiddling with a traditional recipe and I don't believe there's a benefit to the UK economy. I don't think any EU country would disregard their traditional palate to suit another country's." Instead of pushing for regulations, Lepard says he "likes that we have our differences in the way we make foods. I love French and Italian jams, but I do love a firm-set British jam too - I like those lumpy bits of unmelted jam on toast."

Indeed, British jam is known for its firm set and bright colour. "That jelly set is something that's quite special in British jams and it's because of the sugar content; you'll start to lose that," says Lepard. For marmalade, he believes the high sugar percentage is especially important: "You need the sugar to counteract that bitterness." Munt believes that reducing the minimum sugar content will lead to products with "dull colours that don't taste the same, and certainly don't last as long".

Unsurprisingly, McKenna disagrees. "It's utter rubbish. Our shelf life is 18 months - and we wouldn't be able to sell it if it looked like 'coloured mud'." Fraser Doherty of SuperJam, which makes its jams with fruit and fruit juice and no added sugar, is with her. "Making jam purely from fruit gives it a vibrant colour," he says. "The regulations are really old. Jam-making has advanced, and the pectin available now means you can get jam to set at almost any sugar content."

Both McKenna and Doherty say that sugar is not synonymous with quality. "Jams with 60% often have that much sugar as it's cheaper to make," says Doherty, while McKenna points out that some big brands use syrups (including high-fructose corn) or fruit juice from concentrate. Of course, even jams made with a higher percentage of whole fruit and juice contain fructose (which many health experts now argue is just as bad, if not worse, for you as refined sugar), but this may benefit you in other ways - there's a higher vitamin content and more fibre. "Our products are made very quickly to try to retain the fibre of the fruit," says McKenna.

If you'd like to make your own preserves with less sugar, but without boiling them for longer to make them set, McKenna suggests using "bramleys, redcurrants, blackcurrants or gooseberries - the superglues of the jam world". To make strawberry jam with less sugar, she suggests adding redcurrant juice "to get the colour and set".

Meanwhile, in the corridors of Whitehall, the jam wars rage on. Defra says that Scotland and Northern Ireland have accepted its proposals, and Wales "hasn't finished consultation". So it seems Munt is now fighting a campaign to keep English jam as it is. Whether that campaign is really necessary will no doubt be the subject of a debate as heated as fruit and sugar in a boiling pan.