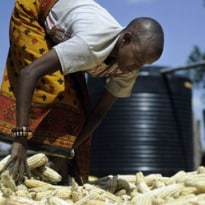 IPCC's forecast of lowered crop yields will ultimately affect us all

It's a human-centric approach, but the prospect of a food scare should be one way to get people--believers and deniers alike--to seriously evaluate the effects of climate change.

Last week, a source leaked a draft report, drawn up by the United Nation's Intergovernmental Panel on Climate Change, and due to be released next March. It's the second of three reports, following the first that came out in September this year. Among other things, the text clearly outlines the threats climate change poses to the global food supply, citing a decrease of up to 2% each decade in yields of staple crops like maize, wheat, and rice.

That projected dip looks even more serious when one considers the parallel 14% increase per decade in the demand for food that scientists are expecting, to match the needs of a population that will reach 9 billion-plus by 2050.

It's a familiar message. But, "what is probably new compared to previous reports is the recognition of climate change's impacts much sooner than was expected," says Alexandre Meybeck, senior policy officer on Agriculture, Environment and Climate Change with the United Nation's Food and Agriculture Organisation. "We are not talking about 2100, we are talking about what's going to happen in 20, 30 years."

The warning on the food supply is the sharpest in tone the panel has issued. Its previous report, in 2007, was more hopeful...The new tone reflects a large body of research in recent years that has shown how sensitive crops appear to be to heat waves.

This IPCC report, which focuses on the impacts of, vulnerability and adaption to, climate change, finds that the negative impacts on crops and yields have been more common than the positive ones, the latter occurring in some higher latitudes where atmospheric carbon dioxide can aid plant growth.

Climate will place limits on staple crops, and the variability of yields will also increase year to year, the IPCC concludes. The rising food prices that accompany this uncertainty will affect the world's poorest the most, and countries in the tropics will bear the brunt of climate change. "The more vulnerable populations and countries will be affected more," Meybeck says, emphasising an oft-repeated fact, "because they are already vulnerable and they also have fewer resources to deal with climate change."

America ranks first for global food security according to the Economist's Intelligence Unit. The lowest ten rankings are almost all African countries. While the United Kingdom and the United States share undernourishment rates of just five percent of their populations, Tanzania and Zambia are approaching 50%, and Burundi sits at 73%. So it's predictable that the subject of food scarcity exists in the consciousness of richer nations as a threat that primarily belongs to the world's poor. The cynical view is that the conclusions in the leaked report only strengthen that association. If the threat feels remote, how do we bring it home?

When Hurricane Sandy hit New York City last year, it was in a sad way, a triumph for the cause of climate awareness. Bloomberg Businessweek ran a bold cover showing a flooded New York street and bearing the title, 'It's global warming, stupid.' Climate scientists might be necessarily cautious about stating this link so definitely, but it's hard to deny that it was a disaster that forced the gaze of wealthier nations upon a threat that felt suddenly larger, and more immediate--not just a problem belonging to yet another poor, disaster-plagued country. A study in the wake of the hurricane showed that, at the very least, Sandy helped opened up the climate dialogue.

Does there need to be a similar spur for the discussion about food insecurity as a truly global problem? There already are several. Last year, America experienced one of its worst droughts, slashing crop yields and elevating the price of cereals. In Europe in 2003, a wave of heat caused a drought that ultimately cost over €8 billion. Between 2008 and 2010, food pricing sparked riots in 30 countries. Food insecurity is often framed as a poor country puzzle, but several pointers suggest that it is not. Currently, its worst effects play out in impoverished nations, but as the IPCC's report also shows, those impacts are set to spread as food availability rapidly becomes a global concern.

Poorer countries may bear the brunt, but that does not leave the rest of the globe immune, the IPCC finds. Major crops in temperate regions will be increasingly affected too. The scientists demonstrate that future food insecurity could in fact be a driver of entirely new 'poverty pockets' in upper-middle to high-income countries, and also in urban centres, as food availability becomes unpredictable and prices go up. And Meybeck points out that maize, wheat, and rice aren't necessarily the only foods to worry about: they're just the ones with the most data attached to them. Studies on other important crops could reveal similar trends. There are imports and exports to think about too, which lock the world's countries--secure and insecure alike--into a giant food web.

The IPCC report will only be released officially next year, but it's unlikely that the core findings will change. If emissions are reduced in coming decades, it states, we'll still have the power to stave off the worst risks, leaving those alive in the latter half of the century to feel the benefits. "There is a growing sense of urgency," Meybeck says. "It's now that we have to do something."

Photo: A Kenyan farmer sun dries her maize harvest, one of the key crops the IPCC says will be affected by climate change. Photograph: Tony Karumba/AFP/Getty Images