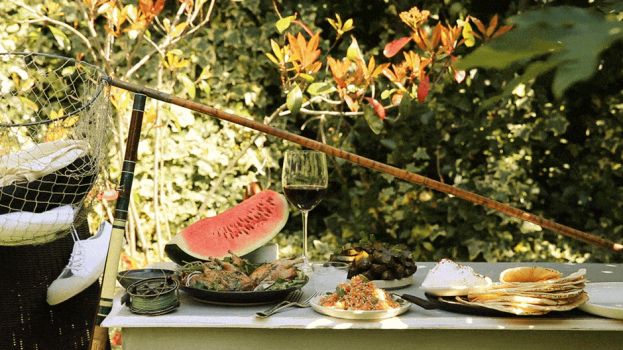 For this meal I would be with my third wife. I don’t know her yet, but I’m sure she’s coming. I’ve been married twice – I love weddings.

We’d be sitting in a vineyard in the mountains of the Beqaa valley in Lebanon. It would be an autumnal day, the late afternoon sun brilliant against the backdrop of dark skies threatening to rain.

There would be a balcony, and we’d be sitting at a marble table and I’d be dressed in Yohji Yamamoto white linen with white tennis shoes. My brothers would be there too. Jeff would be wearing black linen, and Andrew would have just come back from a fishing trip, having hooked a big fat swordfish, which we would be admiring.

Before the meal, we’d have a big Jerry Lewis film session – The Disorderly Orderly, The Delicate Delinquent, Which Way to the Front and The Geisha Boy, in that order. I’d cry in the last one, when Mr Wooley leaves Japan and the little orphan boy Mitsuo wants to go with him, and he cries at the airport. We always cried as kids … Then we’d listen to Frank Zappa’s Sheik Yerbouti, in full. He’d lift me from the sadness … I saw him live in 1981. What an amazing artist. Completely bonkers.

We’d have sauteed quail with garlic, coriander and pomegranate, served with tabbouleh. This is a version of the tiny fig birds dish that is popular throughout the Middle East. With that we’d have stuffed vine leaves with plenty of creamy mint labneh, my mother’s recipe. She prepares them together with lamb chops in one large pot. As it all cooks, the bubbling juices rise to infuse the vine leaves with flavour.

I’d have a good cheese board – a Brillat-Savarin, a reblochon, a Délice de Bourgogne … I’m not meant to eat cheese, but as this would be my last meal, I would really go to town. With it, I’d have an Australian pinot noir, something from the Heathcote area or the Yarra valley.

We’d finish with black figs and watermelon, chilled and cut into wedges. I love spitting out the seeds.

1 Soak the burghul in 5 tbsp cold water for 8 minutes. Drain well, then squeeze as dry as you can.

2 Chill a stainless steel (or glass) bowl. Add the chilled salmon, the burghul and all the remaining ingredients. Mix to combine thoroughly then refrigerate until needed.

3 When ready to serve, make the soft herb salad. Combine the herbs, artichoke and onion in a mixing bowl and toss with the lemon juice and 1 tbsp extra-virgin olive oil. Season to taste.

4 To serve, spoon the chilled salmon mix on to a flat plate. Use a small spatula to spread it out to a rounddisc of even thickness. You can use a sharp knife to mark the surface in the traditional diamond pattern, if you like. Otherwise, mound the salad on top and drizzle on a little more oil. Serve with warm Arabic bread and labneh.