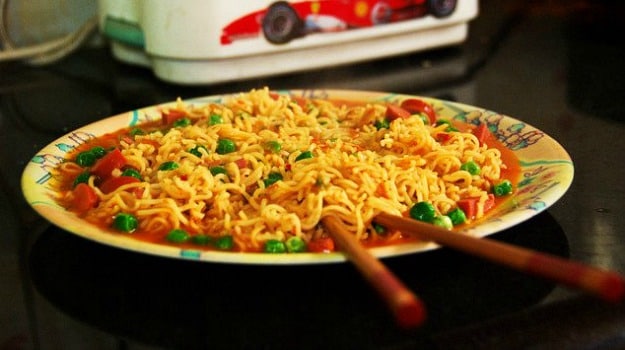 It's hot, it's stringy, it's the ultimate comfort food and all it needs is just two minutes! Maggi Noodles, your favourite go-to snack has come under fire after some samples in Uttar Pradesh were found to be high in Monosodium Glutamate (MSG) and lead.

(In the Soup Again! The Never Ending Controversies of MSG)

Food Safety And Drug Administration (FSDA) Lucknow collected a few samples and sent them to Kolkata for testing. The report found the samples to contain Monosodium glutamate (MSG) beyond permissible limit.

According to Mayo Clinic, "Monosodium glutamate (MSG) is a kind of flavour enhancer that's usually added to Chinese food, canned vegetables, soups and meat." MSG has been a popular food additive for years and is usually regarded as safe, when used in limited quantity only. But too much MSG in your food can lead to headache, sweating, burning on the face, neck and other areas. It can also cause to nausea and weakness. When MSG is consumed over a longer period of time, it can also damage the nervous system.

According to Dr. Simran Saini, Nutritionist at Fortis Hospital, New Delhi "High amounts of Monosodium glutamate (MSG) can cause a gradual increase in blood pressure.  And for people who are already hypertensive, it creates further problems."

She added, "MSG doesn't suit everyone and reacts differently in different people. It could cause bloating, water retention and ultimately weight-gain. Lastly, we've seen that MSG affects the nerves, destablisises your nervous system and can cause long-term problems."

The Food Safety and Drug Administration (FDA) in Uttar Pradesh collected more than two dozen packs of instant noodles from stores across the state and tested each pack separately before making the findings public. According to a Reuters report, they found a lead concentration of 17.2 parts per million (ppm), which is way beyond the permissible limit. They also found very high levels of MSG.

The Reuters report also mentioned that a spokesperson from Nestle confirmed that they had been asked to withdraw the batch dating back to March 2014, but the items concerned had either already been consumed or were beyond the sell-by date, making the recall difficult.

FSDA Assistant Commissioner Vijay Bahadur Yadav said, "We have tested Maggi samples at Kolkata's referral laboratory. The test results show that there are added monosodium glutamate and excess of lead. We have ordered further sampling" (as reported by a popular news website).

(The Food Additive That Could Cause Metabolic Syndrome)

@lcckannan We do not add MSG to MAGGI noodles. Some ingredients may contain naturally occurring Glutamate, which can be mistaken for MSG.

We got in touch with Nestle India for an official statement and here's what they had to say:

"We do not add Monosodium Glutamate (MSG) to Maggi Noodles. We use raw materials that may contain naturally occurring Glutamate and which could be confused with commercially produced MSG. Glutamate is safe and is found in everyday and high protein foods including tomatoes, peas, paneer, onions, milk."

@tweetwanti Maggi Noodles is not banned anywhere, continue enjoying them!!

They also stated that Indian Indian regulators have not specified the limit for the amount of MSG that can be added. When asked if Maggi contains lead/MSG beyond permissible limits, they said "No. Food Regulations consider 2.5 mg/kilogram as the permissible limit for lead and we continually  monitor this. Test reports  at our own accredited laboratories as well as those by independent external accredited laboratories have consistently shown that in Maggi Noodles it is negligible 1 % of the  permissible limit and well within prescribed norms."

It's also being reported that the governments of Maharashtra and Gujarat reached out to Nestle for testing samples of Maggi noodles but Nestle denied these claims and say they haven't received any intimation on this.

(Also see: Yes, You Can Train Your Brain to Hate Junk Food)

CommentsNestle has also tweeted a statement which says that they are aware of the elevated levels of lead and MSG in the reports that have been analysed by the authorities. But insist that they frequently conduct tests in accredited laboratories and have always found lead levels in Maggi to be within permissible limits.