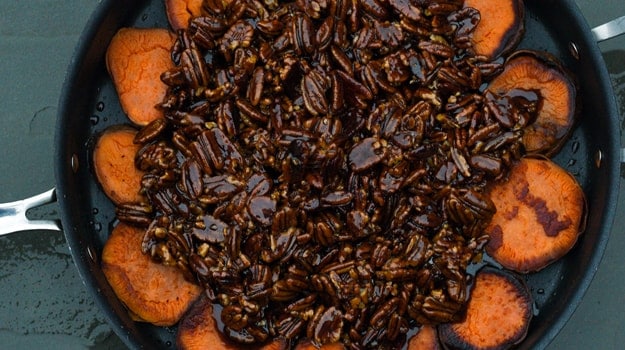 Growing up as the first-generation child of Trinidadian and Iranian immigrants, Thanksgiving is my annual chance to be “truly American.” But it is also a battle between me and parents, whom I wanted to serve only “white people’s food.” Not curried chicken or gormeh sabzi (herbed stew with kidney beans), just turkey, stuffing, gravy and potatoes — that’s it.

They ignored me, preferring instead to mark the holiday with special-occasion dishes from their own cultures alongside turkey and the trimmings.

At the time, I was too embarrassed to talk about it with my peers, but now, many years later, we compare notes. My high school friend Terence Weston told me that his own Caribbean family made Callalloo, a thick, green soup, on Thanksgiving. And in place of a turkey, his family would have molded tofu or bread because they were Seventh-Day Adventists who observed a vegetarian tradition. Over at the DeFazio house, my playmates Theresa, Anthony and Mark enjoyed lasagna and antipasto before the turkey came out, which was OK to my young mind, because Italian food was “really American.”Melding Thanksgiving meals and American values

Brandeis University professor Ruth Nemzoff, an expert in family dynamics and author of "Don't Roll Your Eyes: Making In-Laws Into Family" (Palgrave/Macmillan, 2012), once asked students to describe their Thanksgiving dinner in an attempt to highlight gender roles in the preparation of a ceremonial meal.

"Instead the students returned papers which described how each family put their ethnicity into the holiday," she said. "The hors d'oeuvres were spring rolls, ravioli, or knishes, depending on ethnicity. Surrounding the turkey were remnants of the family's past -- a great metaphor for core American values."

In some immigrant families, no turkey was in evidence whatsoever, although the day was marked with a celebratory meal. Amy Dalal's family came to the U.S. from Mumbai, India, in 1974 as strictly vegetarian Hindus.

"We never had turkey," she said. "My mother usually made some special food, but it would vary from year to year. It might be dosa or matter paneer, a vegetable dish with homemade fresh cheese."
Dalal's mother's nod to American custom is her own fresh cranberry sauce, which the family smears on theplas, a spicy Guajarati flat bread with fenugreek.

On the other hand, Becky Sun's family emigrated from Taiwan in 1976, and they did try to replicate the American Thanksgiving in the small towns in which they lived.

"Like all the other families, we had baked sweet potatoes in a casserole, topped with mini marshmallows and frosted cornflakes," Sun said. "[My mother] also was -- and still is -- a fan of Campbell's Cream of Mushroom Soup, with which she makes green bean casserole with the French's onion sprinkles."

Still, the one thing conspicuously absent from the Sun clan's Midwestern feast was the turkey. Instead, her mom cooked roast duck, and because bread stuffing seemed odd to her, she substituted sticky rice as a side.

Bearing witness to an immigrant past

As evidenced by these anecdotes, putting a personalized ethnic twist on Thanksgiving is an American tradition nearly as old as Thanksgiving itself. Families whose forebears immigrated to the U.S. far earlier, like Tami Weiser's Jewish-American family, who came from Russia and Germany to New Orleans 100 years ago, melded "ethnic" foods with American expectations. Tzimmies, a sweet potato and carrot casserole made at Passover, was a logical addition to the holiday table. When her mother took over the feast, she made the offering more modern -- and more Southern -- by creating a candied yams with pralines. You can get that recipe from The Weiser Kitchen.

Today, children of newer immigrants, like Nadine Nelson, are much more at ease with their multicultural heritage, and I envy them for it. Nelson, whose Jamaican family emigrated to Toronto, Canada, where she was born, moved to New Haven, Conn., when she was 10. Her aunt once tried her hand at turkey and overcooked it. After that Thanksgiving became more of a day for everyone to come together and less about the traditional meal.

A professional cook, Nelson has recently taken over Thanksgiving dinner, with a specific eye to creating a multicultural meal to which the whole family contributes. There is jerk turkey, peas and rice cooked in coconut milk, curry-and-guava-glazed carrots, goat head soup and steamed stuffed fish, all alongside sweet potato casserole, cornbread stuffing and cranberry sauce.

Nelson said the best part of the melded meal is when her aunt insists everyone stand and say what they are thankful for. "It is important for a family to stand witness to that."

Keeping Nelson's words in mind, this year, I, too, will stand witness to my family's heritage. And even though my parents are long gone, their gormeh sabzi and curried chicken happily will be on my Thanksgiving table.

1. Mix together the wet jerk sauce, dry jerk seasoning, salt and pepper in a large bowl, and then rub the jerk sauce evenly over the inside and outside of the turkey.

2. Using your fingers, gently separate the turkey skin from the breast and rub the sauce mixture under the breast skin as well. Use up all the sauce, rubbing it around the turkey.

3. Place the turkey breast side down inside a 2-gallon, heavy-duty sealable oven-proof bag. Squeeze out as much air as possible and seal the bag. Refrigerate and marinate for 24 to 48 hours, turning over every 12 hours.

4. Preheat oven to 450 degrees F. Prior to cooking, open the bag and rub the green seasoning (see recipe below) all over the turkey, under the breast skin and inside the cavity.

5. Position the oven rack near the bottom of the oven. If using stuffing, remove the turkey from the baking bag and loosely pack the stuffing in the cavity. Rub the outside of the turkey with the butter.

6. Put the turkey back in oven-proof bag and seal well. Place in a deep roasting pan and cook for 45 minutes, then lower the temperature to 325 degrees F. Continue roasting the turkey until a meat thermometer registers 180 degrees F in breast meat or 185 degrees F in thigh meat. This should take about 2 1/2 hours for an unstuffed turkey or 3 1/2 to 4 hours for a stuffed turkey.

7. Remove turkey from the oven and put it on a warmed platter. Cover loosely with foil and let rest for 30 minutes before carving.

Place all the ingredients in a food processor and process to a smooth paste, about 1 to 2 minutes.

1. Heat the olive oil in a large, heavy-bottomed pot over medium heat, then add the onion. Fry until the slices begin to soften and become translucent, about 1 to 2 minutes.

2. Season the meat chunks well with salt and pepper to taste and add it to the pot with the onions. Fry until golden brown, about 8 to 10 minutes for beef or 5 to 6 minutes for chicken.

3. Stir in the turmeric and mix well. Allow the mixture to fry for 1 minute more, then add the water.

4. Place the parsley, leek and fenugreek in a food processor and chop to a fine consistency. You may also do this by hand. Add the chopped herbs to the stew, along with the limou omani.

5. Add salt and pepper to taste and lower heat to a simmer and cook until the meat is fork tender, about 1 1/2 hours for beef or 30 minutes for chicken.

6. Stir in the rinsed kidney beans, more salt and pepper is desired and simmer 10 minutes more.

7. Stir in the saffron and simmer 1 to 2 minutes. Serve with rice. (See recipe below.)

The secret to the long, fluffy grains of Persian Rice is steaming and a method that "traps" the excess moisture away from the rice as it steams.

1. Wash the rice by placing it in a deep bowl and filling it with cold water. Swirl the water around with your hand until it is cloudy. Carefully drain the water. Repeat 4 or 5 times until the water is clear. Set aside.

2. Bring 6 cups of water to a boil in a large, nonstick sauce pot or a large iron pot and add the salt and 1 tablespoon of the oil.

4. Add 1/4 cup of water to the rice pot and 1 tablespoon of the oil to the rice pot. Swirl it around. Add 1 large spoon of rice into the middle of the pot and add spoonful after spoonful in a mound until all the rice is used.

5. Drizzle the remaining oil over the rice and pour another 1/4 cup of water over it. Use a rubber spatula to smooth the pyramid up into a smooth cone.

6. Place a clean dishtowel or doubled up paper towels over the pot and then squeeze the lid into place. Place over low heat for 30 to 40 minutes.

Comments7. Remove the rice and place it on a platter. To remove the tahdig, or rice crust, take the pot and carefully hold the bottom under cold water. Then use the spatula to loosen the crust. Turn it out onto a platter.