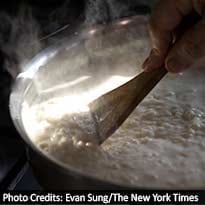 If Italy's most celebrated modernist chef is coming over to make brunch, don't be surprised if he shows up packing a sleek nitrous oxide siphon. It's just for the breadcrumb foam.

Massimo Bottura, the energetic chef and owner of the three-Michelin-star Osteria Francescana, in Modena, arrived at my kitchen with a motley tool kit. He immediately began a passionate disquisition that would last the whole morning. In the time it took to make risotto, he covered everything from the origins of modern art, to the nature of the Italian personality, to his collection of vinyl LPs.

The risotto itself, called riso al latte, is one of the most traditional and homey of Italian dishes, the kind of thing countless nonnas stir together for their grandchildren as a comforting supper. It was his idea to make it for my 6-year-old daughter as a way to pass on his childhood experience - modernized and reinterpreted through the lens of a culinary iconoclast.

Yet, with the exception of the breadcrumb foam and an accompaniment of a tomato-berry salad seasoned with aged balsamic vinegar, his vision for riso al latte did not stray far outside the normal parameters of Italian tradition. This is not usually the case at Osteria Francescana, where he serves avant-garde creations with names like Memory of a Mortadella Sandwich (a rosette of mortadella foam) and Snow Under the Sun (raw potatoes, porcini gelatin, coffee powder and snails). In what may be his most radical recipe, he re-imagined a classic bollito misto - a sacred dish in the Emilia-Romagna region, usually a mix of boiled meats - as the Manhattan skyline. Each cut of meat is gently cooked sous vide instead of being boiled, and carved into skyscrapers on the plate. All of this ends up tasting absolutely delicious.Although this kind of cuisine is no longer considered envelope-pushing in places like Spain, Scandinavia and the United States, it ruffles feathers in Italy. This is particularly true among the deeply conservative Modenese, whose bones, as Bottura wrote in his latest cookbook, "Never Trust a Skinny Italian Chef," are made of Parmigiano-Reggiano, while balsamic vinegar rushes through their veins. Mortadella foam was not their thing.

When Bottura opened the restaurant in 1995, some locals were so offended by what they considered his subversion of the sanctity of their grandmothers' cuisine that for years they stayed away.

"Even 10 years ago they wanted to burn me in the piazza as a witch," he said. "But now they call me Maestro." These days, he is adored throughout Italy, particularly for his work supporting the local artisanal vinegar and cheese makers. In 2013 he was named a cultural ambassador and sent to the United States to promote Italian cuisine.

I first ate at Osteria Francescana in the fall of 2001, when Bottura was beginning to get international recognition. On the way to the restaurant, my friend and I got so tangled up driving Modena's warren of streets that I had to call the restaurant three times for directions. On the fourth call the chef himself, amused and gracious, told us to wait in a nearby piazza where he would come to fetch us in his car.

He brought us back to the empty dining room and fed us an extraordinary meal that lasted until nearly dinner. There was Parmesan in four textures - foamed, crisped, souffléd and whisked into a silky sauce. Tortellini "walked" on a gelatinized pond of capon broth. "Cappuccino" of onion and potato with aged balsamic was served both hot and cold in the same cup.

It was my first time in Emilia-Romagna, and during that trip I had already devoured the classics: jagged chunks of Parmigiano-Reggiano, drips of aged balsamic vinegar straight from the barrel, and fat cubes of mortadella with my fingers. Though everything reminded me a little of the pale imports we got in the States, the real deal was Technicolor.

In Modena I fell in love with both the traditional and the avant-garde at the same time, absorbing and synthesizing them. To me, they were parts of the gorgeous whole that is the cuisine of Emilia-Romagna, just as Ferran Adrià's food at El Bulli was inextricably linked to the Catalonian region of Spain. Bottura had worked at El Bulli there for a summer and, like his renowned mentor, he brilliantly applied intellect and science to a visceral and emotional tradition, managing to harmonize it all on one plate.

Back in New York, he sliced cherry tomatoes for the fruit salad on paper towels to absorb their excess liquid. He chatted as he worked, gliding between musings on the nature of creativity and a story about the night he partied with Lou Reed. At 3 a.m., he had found himself bemoaning the thousand-year-old recipe for bollito misto to Reed and his band. "So I'm saying to Lou Reed: 'Why do you have to boil the meat in the water? Why? OK, it's tradition, but tradition doesn't respect the ingredients,'" he recounted. "'It's not good for the meat.'" Reed completely got it, Bottura said. "To me it was the best thing ever."

All this is par for the course for Bottura, who constantly analyzes and questions every step of the culinary process. His passion for tradition, and for pushing it forward, informs his work in the kitchen. For him, the path to creating something new begins with looking at the past critically, without nostalgia, but also with love and respect - and a touch of humor.

When the rice was cooked to a perfect al dente, Bottura called my daughter, Dahlia, over for a taste. But first he gave her a puff of breadcrumb foam - crumbs soaked in milk and seasoned with sugar, then aerated through the siphon.She pursed her lips.

"Always listen to what the kids have to say," he said. "Look at their face and you can see this is pleasure or this is not pleasure." This was definitely not pleasure, so he left out the foam, finishing the rice with a pinch of flaky sea salt, crunchy dried breadcrumbs and a drizzle of sweetened, milky cappuccino. Dahlia took a bite and gave him two thumbs up. Bottura was satisfied. It wasn't a traditional dish and it wasn't a modernist one.

But the soothing rice mixed with the milky coffee reminded him of what his mother used to cook for him, albeit filtered through all the lessons he's learned since then, from his stint in the El Bulli kitchen to Dahlia's bread-crumb-foam frown. "This is amazing," he exclaimed as he ate his humble plate of creamy, salty, coffee-spiked rice. "I didn't plan it like this, but we got the perfect thing."

Mix the tomatoes and other fruit in a bowl, seasoning them very lightly with a few drops of vinegar and oil and, if you like, a pinch of pepper.
Yield: 6 servings

1. In a medium pot, combine milk and vanilla bean. Using a vegetable peeler, remove half the lemon peel in strips; add to pot. (Reserve the half-peeled lemon.) Heat liquid over medium heat until steaming but not yet simmering. Remove from heat, cover pot and let stand 1 hour. Uncover pot and rewarm liquid over low heat.

2. While milk steeps, heat oven to 350 degrees. Place bread on a baking sheet and toast in the oven until dry and golden, 10 to 25 minutes depending on how dry it was to start with and how thick the slices are. Use a rolling pin to break the bread into large, irregular crumbs, with some the size of peas and the rest finer (you want texture).

3. In a large dry skillet over medium-high heat, toast rice until fragrant, 3 to 4 minutes. Stir in oil.

4. Stir in several ladles of warm milk. (Leave behind the vanilla beans and zest.) Cook, stirring frequently, until rice has soaked up most of the liquid. Continue cooking, adding a few ladles at a time, until rice is al dente, 18 to 22 minutes. If rice mixture is too thick, or if you have used up all the milk before the rice softens, stir in hot water until the texture is pleasing to you. Stir in sugar and mascarpone. Finely zest the rest of the lemon, grating directly into the pot.

5. Spoon into bowls and top with breadcrumbs. Drizzle a little coffee over the top if you like, sprinkle with salt and serve.
Yield: 6 servings