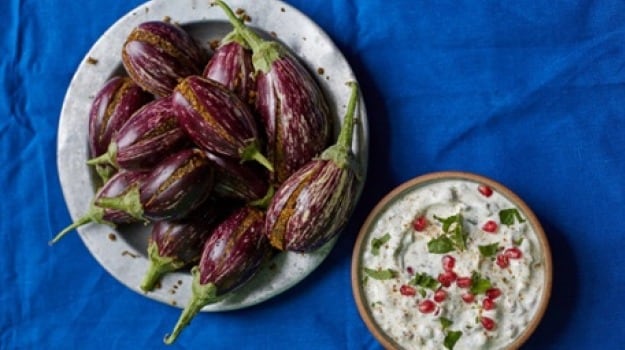 New resident columnist Meera Sodha visited Gujarat - where vegetarian cuisine is king - to explore her Indian roots. Here she shares with us a treasured Gujarati family recipe for stuffed baby aubergines passed down through countless generations.

Charting a family history can take many forms. Sometimes it's a series of handwritten letters or boxes of strange objects in the attic, occasionally it's drawn up in a family tree. And while my own family has lost most of its material possessions over the years, our stories have been kept intact through recipes and food. At the start and heart of every story is a place called Gujarat. Although I've never lived there, the spirit of this place exists in most aspects of my daily life: I think like a Gujarati, I speak Gujarati and day in, day out, I cook Gujarati food.

Little is commonly known about Gujarat in the UK, despite the fact there are hundreds of thousands of Gujaratis here. It's one of the most interesting gastromonic regions in India. This may be because, as a group, we are quiet and industrious, more inclined to become accountants and corner-shop owners (Mr. Patel is Gujarati) than restaurateurs (a trade that's dominated by Bengalis and Bangladeshis).

Nor is Gujarat a tourist magnet. It might have been the birthplace of Mahatma Gandhi and Narendra Modi but it's not as sexy as Rajasthan with its maharajahs and grand palaces, and it can't boast perfect winter sun beaches like Goa. But there is one thing about Gujarat that marks it out from the rest of India: its incredible ingenuity with food, and with veg in particular.

Nearly all of Gujarat's 62 million inhabitants are vegetarian because of the age-old Hindu and Jain principal of ahimsa, which means "non-violence" to all living things. This is the way it has been for centuries, so it is a way of life rather than a choice: restaurants there are not "vegetarian restaurants", but simply "restaurants".

This limitation has encouraged constant creativity. You can see it on the streets, in homes, restaurants and temples. It's a food lab of the most magnificent proportions.The kind that Rene Redzepi and Ferran Adria could only dream of, where each ingredient has been tested, cooked and stretched to its limits over many years. Take chickpea flour, for example - an innocuous and cheap supermarket ingredient, but with a Gujarati sleight of hand it is transformed into a variety of dishes of different textures and forms - from the gossamer-like chickpea bread dhokla studded with sesame and mustard seeds, to a silken handkerchief-like pasta called khandvi. Then there's the seductively smooth kadhi - a household staple of hot yoghurt and chickpea soup (in which tender okra is often submerged) and addictive crunchy snacks such as bhajis and gathiya. I've not even mentioned the family favourite: gram flour fudge (don't knock it till you've tried it: it's a sweet of the deepest and most satisfying kind).

When my grandfather took the family to Uganda to build a business, the spirit of Gujarat stayed with them. New dishes were created with whatever they could get their hands on including cassava, tapioca and plantains, which now feature in my family's culinary repertoire. After 1972 and exile from Uganda, that Gujarati repertoire was adapted to our new home in Linconshire.

Until two years ago, I'd never been to Gujarat. I decided to go while writing my first cookbook to meet family I'd never met and visit the birthplace of my grandfather. After a bumpy two-hour bus trip to the remote village of Kanora, I asked around for the old Lakhani house. Eventually, a village elder pointed it out.

Tentatively, I knocked on the door and was welcomed in by the new owners, who said they hadn't changed a single thing inside it since they bought it. It was exactly the same as when my grandfather had grown up in it.

Normally, I remember only a handful of events in any particular year, yet I can recall every second I spent in that house. The smell coming from the kitchen, in particular, was magical: they were making bharela ringan - aubergines cooked in peanut and coconut; a Gujarati classic - and they invited me to stay for lunch. I sat at the kitchen table where my grandfather would have sat with his seven sisters and brother and imagined what he must have been thinking when he decided to leave this home and set sail across the Arabian Sea to seek his fortune in Africa. In all the years I knew him, I never thought to ask him about it. But I did on many occasions share this dish with him, and every time I eat it, it reminds me to dream big.

Baby aubergines with peanut and coconut

This was originally my grandmother's recipe, but it has been amended over the years - by my mother, and me. When I asked my grandma where it originally came from, she said that it had belonged to many people before her. The ingredient list might seem on the long side, but they are simply whizzed up in a food processor before being stuffed into the aubergines, which leaves you with little else to do.

1 Cut each aubergine in half along its length, but do not cut through the stem. Roll over and cut again so that it is quartered, but is still intact at the stem. Leave them to one side in a bowl of cold water.

2 Heat a large, lidded frying pan on a medium heat and, when hot, toast the coconut and peanuts for 2-3 minutes or until the coconut is starting to brown. Tip into a bowl and leave to cool.

3 In the meantime, put the coriander, garlic, chilli, tomato puree, cumin, salt and turmeric in a food processor and, when cooled a little, add the peanuts and coconut. Pulse until coarsely ground and fully mixed.

4 Open out the aubergines like a beak, creating a criss-cross shape at the base, and fill with the mixture using your hands. Roll the aubergine over, open and stuff again then press closed. If there's any leftover stuffing, keep to one side.

5 Next, heat the oil in the frying pan until hot, then add the onion and fry until it has become golden and soft. Add the aubergines and 2 tbsp water to the pan, turn the heat up high for a couple of minutes, put the lid on, then turn the heat down. Cook for 10 minutes then gently turn the aubergines and add a splash of water if they're looking dry. Then cook for a further 20 minutes or until they're nice and tender.

6 Serve the stuffed aubergines with pomegranate and mint raita and chapatis (below).

Amchur is a powder made from unripe green mangoes; its acidity balances the sweet pomegranates perfectly. It's not essential though, so don't worry if you can't find it.

1 Quarter the pomegranate, break each segment in half and ruffle out the seeds gently, using your thumbs. That way the jewels stay intact.

2 Once you've got your pomegranate seeds, put a frying pan on a medium heat, tip the cumin seeds into the pan and roast them for a couple of minutes. Then put them into a pestle and mortar and grind coarsely.

4 Sprinkle the amchur on top and serve.

These quick, wholesome flatbreads are the perfect sidekick to curries as well as a great wrap for leftovers. Make as many as you can.

Makes 8
1 mug of wholemeal chapatti flour, or half regular wholemeal and half plain white flour, plus an extra bowlful for dusting the dough
1/2 tsp salt
3 tbsp rapeseed oil, plus 1 tsp extra
1/2-3/4 mug of water

1 Put the flour into a bowl, add the salt and mix together. Make a well in the middle, add 3 tbsp of oil and mix, using your fingers, until it resembles fine breadcrumbs. Pour in 1/2 mug of water, then add the rest little by little - you may not need all of it - until you can knead the mixture into a soft and pliable dough; this will take around 6-8 minutes.

2 Lightly rub the dough with 1 tsp oil (so it won't dry out) and put to one side while you get your chapatti rolling station ready. You will need a clean surface or a floured board like a chapatti board, ideally on one side of the stove top. You'll also need a rolling pin, a bowl of flour in which to dip the balls of chapatti dough, a spatula (or chapatti press), a frying pan, and a plate for your cooked chapattis.

3 Once all is ready, divide your dough into 8 pieces. Put the frying pan on a medium to high heat. Take one piece of dough, roll it into a ball between your palms, coat it generously with flour, flatten it into a disc and then roll it out to around 10cm in diameter. Lightly coat both sides in flour, roll it out to around 16cm and put it face side down on the hot pan.

4 Wait for the edges to colour white and for the chapatti to start to bubble (30-40 seconds), then turn it over and cook the chapatti for the same amount of time. Turn it over again - it should start to puff up at this point, so press it down gently with the flat side of the spatula - for around 10 seconds, then turn it over again and do the same. Check that all the dough is cooked (any uncooked spots will look dark and doughy) and put on to a plate. Cover with a towel or wrap in foil to keep warm, then repeat.

Made in India by Meera Sodha is out now, on Figtree, Penguin; meerasodha.com