Navratri 2018: 9 Forms Of Durga And The Special Prasad Offered To Them 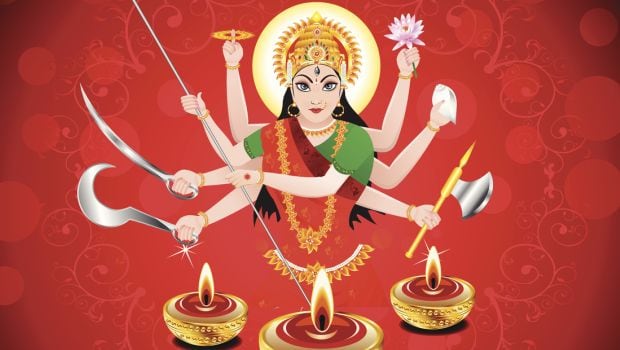 ‘Navratri' in Sanskrit translates to ‘nine nights'. Indians all across the world celebrate these nine nights with full fervor and great enthusiasm. These nine nights of festivities are marked with ritualistic fasting, poojas while adopting a calm and meditative lifestyle. This Hindu festival is dedicated to Goddess Durga and her 9 avatars. On each of these nine days, Hindus worship the nine different manifestation of Durga or Shakti. The ‘Nav Durga' or the ‘Nine Forms of Durga' are pleased with special offerings and prayers. The significance of Nav Durga is narrated and reiterated in every Hindu household especially during the Navratris as this is the time when Goddess Durga descends from the heaven to bless her beloved devotees.

Here are the nine manifestations of Goddess Durga that are worshiped on each day of Navratri and thebhog or prasadthat is specially prepared for them to seek their blessings.

(Also Read: 9 Navratri Colours And Foods For All Days Of Sharad Navratri 2018)

The first manifestation of Durga is Goddess Shailputri. According to scriptures, she holds a trishul and a lotus in her hands, and rides a bull called Nandi. As per Shivpurana, Goddess Shailputri in her previous birth was born to Daksha Prajapati, and was named ‘Sati'. Deeply devoted to Lord Shiva ever since her childhood, Sati meditated earnestly to beget Lord Shiva as her consort. Lord Shiva bestowed upon her the desired boon and accepted her as her consort. The union was not accepted well by Sati's father Daksha Prajapati, who insulted Shiva by not inviting him in one of his special gatherings. Infuriated upon the humiliation meted out to her husband, Sati immolated herself and sacrificed her life in honour of her husband. In her next birth Sati was born as a daughter to Himalaya, the Lord of Mountains and thus, was called Shailputri. Sailputri is also worshiped as Parvati or Hemvati. The first day of Navratra is dedicated to worshiping Shailputri. Devotees offer pure desi ghee on the foot of Shailputri. An offering of pure ghee is said to bless the devotee with a life free of diseases and illness.

Navratri 2019: The first manifestation of Durga is Goddess Shailputri

The second day of Navratri bhog is dedicated to Goddess Brahmacharini. She is depicted as a monastic goddess in Hindu scriptures, two-armed, clad in white and holding a rudraksh mala and a sacred Kamandalu. Her stance is of utmost piety and devotion. Her meditative form is related to the severe penance undertaken by Sati and Parvati in their respective births to attain Lord Shiva as their beloved consort. She is also known as Tapasyacharini. It is believed that when Parvati was engaged in her deep meditation to please Lord Shiva, she was reduced to a mere skeleton. Her austere penance gained her the name of Bharahmacharini by all the devtas and Gods who were awestruck by her reverence. Worshiping this form of Shakti is known to invoke the spirit of penance, renunciation, virtue and nobility. Goddess Brahmacharini is a lover of simple food and offerings. Devotees serve a bhog of sugar and fruits to Goddess Brahmacharini.

Navratri 2019:  The second day of Navratri bhog is dedicated to Goddess Brahmacharini

The third manifestation of Durga is Goddess Chandraghanta. She is depicted as a fierce 10-armed Goddess, roaring in anger. Chandraghanta is worshiped on the third day of Navratri. She has a golden complexion and on her forehead she wears a crescent moon, which is why she is called Chandraghanta by her devotees. According to scriptures during a great battle between gods and the demons, the sound vibrations produced by her ghanta (bell) took the lives of many wicked enemies. She rides on a lion and is believed to destroy all evil and wicked. The ferocious Goddess is pleased by offering milk, sweets or kheer.

Navratri 2019:  The third manifestation of Durga is Goddess Chandraghanta

On the fourth day of Navratri, Goddess Kushmanda is worshipped. The name Kushmanda is made of three other words ‘Ku' (little), ‘Ushma' (warmth or energy) and ‘Amnda' (egg) which means the one who created the universe as the “Little Cosmic Egg” with energy and warmth. According to Hindu scriptures, the universe was a dark space and it was Goddess Kushmanda who produced the Cosmic Egg with her smile. Devotees worship the Goddess by observing fasts and offering Malpua as bhog.

Navratri 2019: On the fourth day of Navratri, Goddess Kushmanda is worshipped

The fifth manifestation of Durga is Skandmata who is worshiped on the fifth day of the Navratri also known as Panchami. Goddess Skandamata is depicted as a four-armed deity, who carries a lotus in two of her arms with a Kamandalu and a bell. She is also seen carrying little Kartikay on her lap. Kartikay is also known as Skanda, hence giving the goddess the name of Skandamata. Her posture is calm and serene. She is seated on a lotus, but a lion is also her vehicle. A bhog of bananas is offered to the goddess and it is said to keep the devotees in good health.

Navratri 2019: The fifth manifestation of Durga is Skandmata who is worshiped on the fifth day of the Navratri

Worshiped on the sixth day (Shashti) of Navratris, Goddess Katyayani is a form of Shakti who is depicted as having four arms, and carrying a sword. She rides a lion, and can be pleased with true devotion and piety. She is the daughter of Sage Katyayan. Devotees offer honey as prasad to Goddess Katyayani. Her blessings fill their lives with sweetness and help them get rid of bitter troubles.

Navratri 2019:Worshiped on the sixth day (Shashti) of Navratris, Goddess Katyayani is a form of Shakti

Goddess Kaalratri is worshiped on the seventh day of Navratris. According to the Hindu scriptures, Goddess Kaalratri is etched as a four-armed deity who rides a donkey. She carries a sword, a trident and a noose. She is the fierce form of Durga, dark and ferocious in appearance. She possesses three eyes on her forehead that are known to contain the entire universe. She breathes fierce flames of fire, and lustrous rays emanate from her. Fierce on the outside, Kaalratri bestows her true devotees protection from evil-powers and spirits. Devotees offer jaggery or sweets made with jaggery. The prasad is also given to Brahmins along with Dakshina.

Navratri 2019: Goddess Kaalratri is worshiped on the seventh day of Navratris

Durga Asthami or the eight day of Navratris is dedicated to Goddess Mahagauri. As per the scriptures, Mahagauri worshiped as the four-armed deity who rides on a bull or a white elephant. She carries a trishul and a damru. When Parvati decided to go on an austere penance to beget Lord Shiva as her consort, she renounced all comforts and lived in a forest for deep meditation. Her meditation continued for several years - braving heat, cold, rain, and terrible storms. Lord Shiva, impressed by her deep penance, appeared before her and showered the holy water of the Ganga over her. The Gangajal washed off all the dirt. She regained her natural beauty, and came to be known as Mahagauri. Goddess Mahagauri  is offered coconut as bhog by devotees.  It is widely believed that donating coconuts to the Brahmans on Ashtami, blesses a childless couple with a child.

Navratri 2019:  Durga Asthami or the eight day of Navratris is dedicated to Goddess Mahagauri

CommentsWorshiped on the ninth day, Goddess Siddhidhatri is projected as a four-armed deity sitting calmly on a lotus. She also holds a lotus, mace, discus and a book. This form of Shakti signifies the ushering of knowledge and wisdom over ignorance. Siddhi in Sanskrit translates to accomplishment. Thus, Goddess Siddhidhatri signifies perfection. On the ninth day of Navrartris, devotees observe a fast and offer til or sesame seeds as bhog. This is believed to protect the devotee and his family from unfortunate mishaps.

Navratri 2019:  Worshiped on the ninth day, Goddess Siddhidhatri is projected as a four-armed deity sitting on a lotus