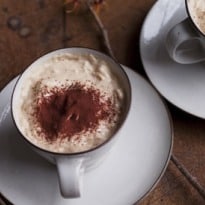 Whipped into a souffle, cake or frittata, the egg is an ingredient no cook should be without - even if Nigel Slater is squeamish...

There is no cheque you could write that would tempt me to eat an egg. It is to my eternal regret that I will never know the pleasures of one softly cooked with its blanket of Hollandaise sauce and doughy raft of English muffin; the childish joy of dipping a buttered soldier into the dripping yolk of a morning boiled egg in its little striped cup; the quivering delight of a perfectly poached egg on a square of toast or the cheerful face of a pert yolk and wibbly white fried and tucked among its friends in a Full English.

(Note to new parents: do not force your child to eat anything they don't like. They may end up hating it for the next 50 years.)

And yet, hidden in a souffle, a cake, a pate or a frittata, I am up for an oeuf or two. I get much pleasure from seeing them, in the style of a Cedric Morris painting, in a bowl on the kitchen table. Or running my fingers over their blue, cream, brown or ivory shells. I am happy to cradle one from the henhouse to kitchen, and am enchanted by the sight of a stray feather found in an egg box. But put one in an egg cup and I will run faster than a flock of Welsummers from the jaws of a hungry fox.

Which brings me to the mousse. Twenty years ago there was barely a menu in the land without a salmon, ham, avocado, lemon, orange or chocolate mousse. And when I say chocolate I mean one of those wobbly gelatine-based numbers they used to teach at Cordon Bleu rather than the wannabe truffle version thick enough to stand a spoon in. But they have all but disappeared, which is a shame because I rather like the cloud-like fluff of a sweet or savoury mousse with its hidden cargo of eggs. Just don't even say the word coddled.

Light, creamy, delicate. Tastes like a cappuccino. Use the strongest espresso you can make. Enough for 8.

Separate the eggs, put the yolks into the bowl of a food mixer and the whites in a large mixing bowl. Add the sugar to the yolks and whisk until light, thick and creamy, occasionally scraping down the sides of the bowl with a rubber spatula.

Soften the gelatine sheets for 5 minutes or so in a bowl of cold water, until they are soft and jelly like. Whip the cream until it will sit in soft folds. It should not be stiff. Make the espresso - it needs to be very strong - then add the softened gelatine to it, stirring until it has dissolved.

Gently, but thoroughly, fold the whipped cream into the egg yolks and sugar mixture, followed by the coffee and gelatine. Beat the egg whites until stiff, then, using a large metal spoon, tenderly fold them into the mousse, making sure they are fully mixed in. Spoon or ladle the mixture into cups or small bowls and refrigerate for a couple of hours until set. Don't leave overnight.

Dust the top of each mousse with a little cocoa powder before serving.

Remove any skin and pin bones from the fish, cut the flesh into large chunks, then blitz to a smooth, thick paste in a food processor. Lift the bowl from its stand and place in the fridge for 20 minutes.

Remove the salmon from the fridge, return the bowl to the machine, add a little salt, then add the egg whites, unbeaten, with the motor running. As soon as it is incorporated, return it to the fridge.

Set the oven at 180C/gas mark 4. Returning the salmon to the food processor, mix in half of the cream. Stop the machine as soon as it is incorporated, and chill the mixture once more. Beat the remaining cream of soft folds with a whisk - it should stop just short of standing in peaks - then fold it into the salmon mixture by hand. Be thorough but gentle.

Chill the mixture once more (the last time, I promise) for half an hour. Roll out the pastry to a rectangle 30x40cm with the longest side facing you and place it on a baking sheet. Brush the edges of the pastry with the beaten egg and milk.

Place the mousse mixture on the right-hand side of the pastry then wrap the pastry over the mousse to give a rectangular parcel and seal the edges firmly. Trim any ragged edges, then crimp them with your thumb and fingers, or with a fork.

Brush the pastry with a little more of the egg and milk, score a trellis of lines across the surface if you wish, and pierce three slits in the centre (this will prevent the pastry from splitting during cooking).

Bake for 50 minutes to an hour, then allow to cool for 20 minutes before serving with the sauce below.

For the hollandaise sauce:

Put a pan of water on to boil with a heatproof glass bowl resting on it. The base of the bowl shouldn't touch the water. Put the yolks into the bowl, then a tiny splash of water.

Slowly add the melted butter, whisking the mixture slowly and surely all the time until it thickens to a mayonnaise-like consistency. Finish with a little salt and lemon juice to taste.

Turn off and leave until needed, whisking occasionally so the sauce does not separate. Serve in a jug, with the salmon in pastry.

'I rather like the cloud-like fluff of a sweet or savoury mousse with its hidden cargo of eggs': Nigel Slater's coffee mousse. Photograph: Jonathan Lovekin for the Observer