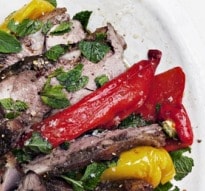 For an easy and exotic lunch, rub a tender joint with Middle Eastern spices and cook it over a tray of colourful vegetables. Then serve it on the patio in the sunshine.

I like it when the roasting juices from the Sunday joint trickle down and mingle with those of the vegetables underneath. Which is why I have a leg of lamb in the oven roasting on a bed of sweet, ripe peppers.

The peppers are the long, thin sort that curl at the ends like Turkish slippers. The lamb is a small leg, boned by the butcher, slashed and rubbed with that mixture of herbs and spices called za'atar (available from Middle Eastern grocery shops, some large supermarkets and online stores). The meat had an initial sizzle in a fearsomely hot oven and is now cruising at a more moderate 180C.

The spicing mix is a Lebanese one (there are two at my favourite Middle Eastern grocer's, both interesting) and contains wild thyme, ground sumac berries, cumin, coriander and a little cinnamon. The recipes are almost as varied as the masalas of India, but always mild and sweet. This time I have rubbed in a few chilli flakes for the gentle warmth they bring.

As the meat cooks, I baste it occasionally with some of the collective juices from the sweet peppers, olive oil and those from the meat and its fat. The magic happens when the liquids, spiced, seasoned and lightly caramelised, come together to form a harmonious syrup to spoon over the meat on your plate.

The other day I did much the same with a piece of beef - for once an expensive cut, sliced thinly so it went a long way. I roasted the fillet, for that is what it was, on a bed of courgettes with fresh summer garlic and fat, peppery basil leaves. It cost more than I usually like to spend on one meal, but won me over with the flavours that congregated in the pan. Thin, fruity, beefy juices that would have made a thickened gravy look a bit crass. Let's hear it for the roasting juices.

Lamb with za'atar and roast peppers

Ask the butcher to bone the lamb so you can open it out flat. Keep the bone.

Halve all the peppers lengthways, remove and discard the cores and seeds, then place them cut-side up in a large roasting tin. Tuck the lamb bone among the peppers, pour over three tablespoons of olive oil and set the oven at 230C/gas mark 8.

Open the boned lamb out flat, fat side facing up, on a chopping board. Using a very sharp knife, score the surface at 2cm intervals, halfway down through the meat. This will help the seasonings to penetrate and the fat to crisp.

Roast the peppers for 10 minutes, then remove from the oven. Rub the za'atar into the surface of the lamb, pushing it deep down into the cuts. Do the same with the chilli flakes. (I put more of the chilli over one half, for those who like their spicing on the hot side, leaving very little at the other end, to please those who like something milder.) Scatter over a little salt, then lay the meat on top of the peppers, pour over a little more olive oil, and return the roasting tin to the oven.

Roast the lamb for 10 minutes, then lower the heat to 180C/gas mark 4 and continue cooking for 45-50 minutes so the peppers are soft and lightly caramelised and the meat is cooked but still pink in the middle.

Remove the roasting tin from the oven, cover with foil and leave to rest for 20 minutes before carving into thick slices and serving with the roasted peppers and the roasting juices.

Fillet of beef with basil and lemon courgettes

If you want something to go with this, I would sauté some potatoes.

Lightly crush the peppercorns. (I use a pestle and mortar. They should resemble fine gravel rather than powder.) Tip the ground peppercorns on to a plate and mix in two teaspoons of salt flakes. Lightly oil the fillet of beef, then roll it in the salt and pepper, pressing down firmly so the meat is encrusted with the crushed peppercorns and salt.

Wipe the courgettes, then cut them into thick matchstick-shaped strips. Toss them in a little salt and set them aside in a colander to drain for 20 minutes. This will prevent them from becoming "wet" during roasting. Drain them, pat them dry with kitchen paper, and then add a tablespoon of olive oil. Peel and crush the garlic and add to the courgettes with some ground black pepper and the leaves from the thyme sprigs. Toss gently so the courgettes are evenly oiled and seasoned. Set the oven at 230C/gas mark 8.

When the courgettes are ready, add the basil leaves, roughly torn, and toss gently taking care not to break them up. Squeeze over a little lemon juice, then place on a warm serving plate.

Slice the beef very thinly, then place on top of the courgettes, season with a little sea salt and serve.