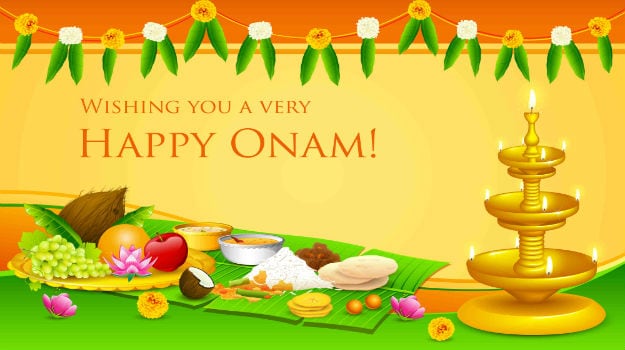 Highlights
Onam is a popular Hindu festival that is celebrated with a lot of enthusiasm in the southern state of Kerala. Onam 2017 stars on 25th August, Friday and ends on 6th September, Wednesday. The 10-day long festival is celebrated during the harvest months and marks the homecoming of Mahabali, a mythical king whose reign was considered a golden era of Kerala. People in Kerala make elaborate preparations during Onam and also enjoy a grand feast known as Onam Sadhya or Onam Sadya.

The word 'Onam' refers to the rice harvest in Kerala. One of the most enthralling tradition of the Onam celebration is Vallamkali, the snake boat race. Dressed boats are oared by hundreds of boatmen over the river Pampa. These snake boats are called 'Chundans'. Men also compete in rigorous sports like Ambeyyal (archery) and Attakalam (combats) as a part of the tradition. Homes are adorned with exquisite flower carpets called 'Pookalam'. People also apply rice flour batter on the main entrance of their homes as a welcoming gesture. The cities brim with fabulous fireworks turning the state into an absolute paradise.

Besides all the festivities, the other great attraction during Onam is the Onam Sadhya, a 26 dish vegetarian feast which is served on the 10th day of Onam. Onam Sadhya in Malayalam, means a banquet or a grand meal.
Enjoy a grand feast known as Onam Sadhya or Onam Sadya. Photo Credit: IstockMost of the Malayali homes in Kerala lay out a princely Onam Sadhya. People sit cross-legged on a mat laid on the floor to relish Onam Sadya that is served on banana leaves, a traditional way to eat in the Kerala state. There is a popular Malayali saying, "Kanam Vittu Onam Unnanam", which means "We should have the Thiruvonam lunch even if it costs us to sell our properties".

There is even a distinct order in the way the food is served on the banana leaf during an Onam Sadhya. Pappadum is placed on the extreme left of the leaf. On the top of the big pappadum, banana is served. Starting from the right of the papad, salt, sarakarapuratti and banana wafers are placed. Only after this, ginger lime and mango pickles are served on the leaf. On the right, 'cabbage thoran' is served. Finally avial and kuttu curry are served.

Rice is served only after the guests are seated in front of the leaves. Only two spoons of rice is considered enough for the sumptuous feast. Ghee is drizzled generously over the rice. Rice is the main dish served with a number of side dishes and curries which are collectively called Kootan. Poured over the rice are dishes like pulissery, sambhar and rasam.

Rice is served only after the guests are seated in front of the leaves. Photo Credit: Istock

The second round begins with serving one more spoon of rice along with desserts like kadala payasam, paal payasam, etc. Payasam is a kheer like dessert made with varied ingredients. The final round is served with rice and buttermilk. This marks the end of Onam Sadhya. The food is eaten with hands without the use of any cutlery. The opulent meal is followed by vettila murukkan, chewing a betel leaf with lime and arecanut.

Although this festival is based on the Hindu mythology, it is now celebrated by people of all class and creed. This glorious festival also depicts the secular character of the state!