Pasties and pies made with hot-water crust pastry | Ruby Tandoh 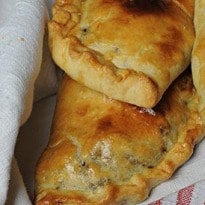 What's this, a pastry that likes to be handled and kept warm? It's enough to make bakers reassess their repertoire. This hot-water crust is a versatile beast and great for pasties and pies

Hot water crust is a pastry heavyweight that will neatly overturn everything you thought you knew about making pastry. Oblivious to standard pastry etiquette, it calls for boiling water and melted fat, prefers to be kept warm and is all the happier for being handled. It couldn't be less like the fragile, standoffishly cold pastry doughs we're so used to. It doesn't bake to quite the same crispness as shortcrust pastry, but it is far sturdier and easier to work with. Here I've included a vegetarian version, as well as the traditional lard‑based one.

These are incredibly meaty for meat-free pies. The pastry is vegetarian, too, eschewing the traditional lard in favour of extra butter.

2 Pour in the porter and leave to simmer on a medium heat for 5-10 minutes, allowing most of the liquid to evaporate. Stir in the flour and leave to thicken for a couple of minutes, then take off the heat, add the cream and tarragon and season to taste. Leave to cool to room temperature before making the pasties.

3 For the pastry, rub the butter into the flour until the mixture resembles breadcrumbs. Pour in the boiling water and stir to combine, then use your hands to gather the mixture together. Leave to cool at room temperature. It's ready when it's more or less cool to the touch, and stiff enough to be rolled and shaped without sticking. Meanwhile, preheat the oven to 200C/400F/gas mark 6.

4 Divide the dough into six pieces and roll each into a circle roughly 20cm in diameter. Place 1 tbsp of the filling mixture into the middle of each, then brush the edges of the circle with egg and fold it over to give a semicircular parcel. Glaze the tops with egg and bake the pasties for 25 minutes.

This is slightly different kind of pork pie: shallow-filled, spiced and not a drop of jelly in sight.

1 Preheat the oven to 200C/400F/gas mark 6. Cube the butter and rub into the flour using your fingertips, until the mixture resembles breadcrumbs. Stir in the salt. In a small pan, heat the water with the lard over a low heat, until the fat is melting and the water steaming. Pour the hot liquid over the butter and flour mixture and stir to combine. Use your hands to bring the pastry together into a ball, and knead just a couple of times under the heel of your palm to strengthen it. Set aside, uncovered, at room temperature while you combine the filling ingredients.

2 In a large bowl, thoroughly mix the pork shoulder, bacon and spices. The bacon should impart sufficient saltiness, but if you're in any doubt about the seasoning, just break off a small ball of the filling, fry for a couple of minutes separately and taste it. If it needs any extra salt or spice, add this to the remaining mixture now.

3 Feel the pastry - it needs to be just cool to the touch. The temperature will be important when it comes to neatly lining the tin. Warm pastry will be limp, greasy and soft; cold pastry will harden and crack. Just keep an eye on it and, as soon as it's cool and firm enough to be rolled and moulded without collapsing or sticking, line a 20cm-diameter spring-form or loose‑bottomed cake tin.

4 Roll two-thirds of the dough out on a piece of lightly floured baking parchment to a circle large enough to line the base and sides of the tin. Slide the dough into the tin and use your fingers to press it neatly into the corners and sides. Don't be shy about handling the pastry: this is a rare instance where you can hold, re-roll and press pastry with impunity.

5 Firmly pack the filling into the lined tin, then roll out the remaining portion of pastry on a lightly floured surface and transfer this on top of the pie. Press the edges of the sides and lid together to seal them. Make a hole in the top with a small knife (to allow steam to escape during baking) then brush the top with the beaten egg to glaze. Bake for 15 minutes before decreasing the temperature to 180C/350F/gas mark 4 and baking for a further 45 minutes. When done, the pie should be a rich golden brown and you'll be able to see it bubbling merrily through the hole on top.

6 Cool completely in the tin, on a wire rack. (If you try to serve this while it's still warm, it'll fall apart.) Once cool, refrigerate until ready to serve.

Photo: A sturdier pastry is needed for a chunky pasty. Photography: Jill Mead for the Guardian