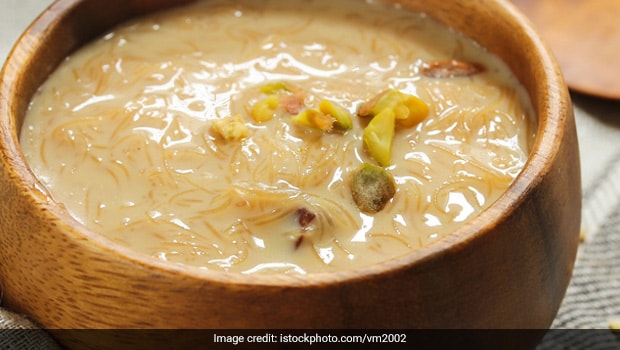 Ramadan 2019 Special: Sheer Khurma is a milk and vermicelli pudding prepared during Iftar

The holy month of Ramadan is going on. It began on May 5th 2019 and it is going to go on till June 4th, 2019. During this time, Muslims all over the world, observe fasts from sunrise till sunset. These pious fasts are called 'Roza. During the month of Ramadan, the day of Muslims begins with 'Sehri', which is a meal consumed before sunrise, preceding the fast. The fast is ended on a daily basis after sunset with the meal called 'Iftari', which is when the entire family sits together and opens the fast with a feast that consists of a number of rich and delicious meat dishes as well as desserts. Two of the most popular Iftari desserts that are commonly prepared in Muslim households during Ramadan include Sheer Khurma (milk and vermicelli pudding) and Zarda Pulav (sweet flavoured rice).

Ramadan 2019 is going on and it's a time to prepare luscious post-fasting meals. Sheer Khurma, also known as sheer khorma, is a festive vermicelli pudding served during Iftari. It can also double-up as delicious festive breakfast. Meanwhile, Zarda pulav or simply zarda is a yellow sweet rice dish that is essentially made by boiling rice and then sweetening it with sugar and dessert spices like cardamom etc.

The delicious and flavourful sevai or sevaiyan dish Sheer Khurma literally translates to "milk with dates" in Persian. It is prepared in Muslim homes during Ramadan Iftar as well as during Eid-al-fitr (the end of Ramadan) in the Indian subcontinent, Afghanistan and in parts of central Asia. The dish is said to have originated in Afghanistan, although another popular version of it was said to have originated from the Indian region that lies in modern day Hyderabad and Telangana. It is sweetened with white sugar and dates and served garnished with pistachios, almonds, raisins and saffron.

Sheer Khurma recipe by Being Marathi:

Zarda, or zarda pulav, is also known as meethe chawal in Hindi. The name zarda comes from the word 'zard', which means yellow in Persian. The dish is popularly consumed in India, Pakistan and Bangladesh and is prepared by boiling rice with a yellowish orange food colouring and flavouring the rice with cardamom (elaichi) and saffron (kesar). Sometimes, it is also prepared by mixing a number of different food colourings, making the rice grains multi-coloured. Milk, khoya, candied fruits etc. may also be added to zarda.

Also Read: How to Make Khoya at Home: 5 Delectable Desserts You Must Try

Zarda recipe by Being Marathi: