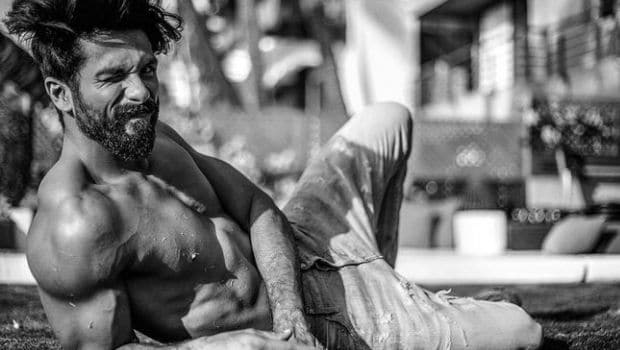 Highlights
He was the most desired boy-next door until he made an effortless slip into the garb of alpha-male machismo in Vishal Bharadwaj's critically acclaimed Kaminey, 2009. Shahid Kapoor has always been a perfect mix of mush and mettle. The Jab We Met actor was first spotted in a music video and went on to seize millions of hearts with his debut Ishq Vishk, 2003. Shahid's cinematic potential was never put to question, albeit he had to battle a series of box-office failures until his brilliant return in Haider, 2014. The actor is all set for the release of his upcoming film Rangoon. The film also stars Kangana Ranaut and Saif Ali Khan in lead roles; it is slated to release on 24th February, 2017.

Shahid's fitness has been one of the constants in his Bollywood career. Shahid - being a trained dancer - has always been a fan of physical activity and never lets passivity seep in.

Shahid's fitness level speaks of a consistency in the style of training that he receives. The Rangoon star started training with celebrity trainer Abbas Ali close to a decade back while filming Chup Chup Ke opposite Kareena Kapoor Khan. Ever since, there has been no looking back; from a lean, sculpted frame Shahid and Abbas worked together to help the actor achieve a more chiseled and brawny look over the years.

Last year's blockbuster Udta Punjab saw Shahid in a Shandaar avatar. He looked tauter than ever, and the credit definitely goes to all the hard work that he put in. Shahid is a self-proclaimed fitness freak and believes in exposing his body to a range fitness activities and techniques to achieve a well-rounded result.

From dancing - that comes naturally to him - to body-weight training, cardio exercises and equipment training, Shahid does it all.

In his interview with GQ, Abbas Ali talked about Shahid's training regime. He revealed that he works a great deal on his core as it really enhances the body's efficiency in performing other activities.

From planks, side planks, push-ups, bench-press, pull-ups to Sumo dead-lifts, running and many other techniques, Shahid's fitness routine is always a balance between equipment training, cardio and body-weight exercises like burpees and even yoga. According to a recent IANS report, Shahid followed a strict diet and an intense workout regime for Sanjay Leela Bhansali's Padmavati. Reportedly, Shahid trained religiously for close to two hours everyday besides battling a 14-hour shoot.

Listen to the latest songs, only on JioSaavn.com
"Shahid underwent a complete boot camp regime under the guidance of trainer Samir Jaura," IANS reported.

Shahid is a strict vegetarian, a choice that makes it difficult to acquire and maintain energy required to match up the intensity of his workout. In such a case the focus shifts on deriving maximum nutrients from the vegetarian sources. Over the years, Shahid's diet has been a mix of protein and energy dense vegetarian food. "Shahid is a vegetarian, hence we had to ensure that his daily meals are packed with all essential nutrients and nine amino acids," shared celebrity fitness and nutrition advisors Marika Johansson and Nigel Jairaj with India Today. Shahid's diet is therefore a balanced mix of low-fat tofu, paneer, soy, brown rice, quinoa, fresh fruits and vegetables apart from foods rich in amino acids.

"A combination of leucine, isoleucine, and valine - types of amino acids help in recovering after intense workouts," noted Jairaj and Johansson.

CommentsFor Padmavati, Shahid survived on 50gm of brown rice and steamed vegetables for the entire day. "The aim was to lose some body fat and gain lean muscles. The training and diet plan intensified 40 days before he began shooting in November. Shahid went off salt and sugar for 15 days when close-ups were to be taken. Now we've added more carbs to his diet as he is required to look heavier," Jaura shared with IANS.

Undeniably, Shahid is a storehouse of energy. Whenever on stage, he sets it on fire and reaffirms that he is not the one to tire down easily. He is one of the few actors who pursue fitness for passion and therefore consistency and discipline are inevitably taken care of.