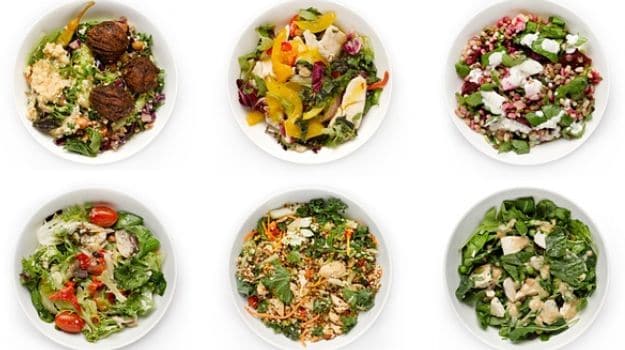 We fork out a lot of money for our lunchtime salads, and among the vile vinaigrettes, cacophonous flavour clashes and dreary, pallid veggies, a few manage to be worth it

The average British worker spends about £800 a year on lunch and, despite that painful sum, they are certainly not living the high life. According to market research by consumer analysts NPD Group, more than two-thirds of that moolah is spent on hastily grabbed, to-go lunches that half of us take back to our desks to eat. Is a colleague having a quiet, existential crisis about their Cajun chicken wrap at the desk next to yours? Quite possibly.

It is a sorry state of affairs, but one that explains why, in recent years, the supermarkets have been so keen to take on the sandwich shops at lunch. It is a big money market and one that, of course, encompasses far more than just sandwiches. Given our increasing interest in healthy eating (or what feels like it, anyway), those supermarket chillers are now also brim-full of both traditional and exotic takeaway salads. But can any of these compete on quality with the bestsellers from perceived high-end competitors, such as Eat and Pret A Manger, whose salads are made fresh each day? We asked the supermarkets for some of their new and most popular salad creations and put them to the test.

The "sliced chicken with added water" looks as pallid and clammy as a trainee accountant from Ely peeling his top off on a Mediterranean beach. As for its "fiery" Moroccan seasoning, it contains numerous ingredients, but the chicken looks as if it has been rudimentarily dusted with paprika and tastes equally anonymous. That "fire" is smouldering ashes. Remarkably, the mango dressing is reasonably well-balanced, mint and lemon off-setting its sweetness. But does it taste lovely over cherry toms, mixed leaves and the chicken? Of course not. It creates unholy flavour confusion. 3/10

The rectangular tray is sensibly laid-out, including a cutlery well. That may sound like a banal point, but try tossing a supermarket salad bowl with a cheap, bendy fork and you will get it everywhere. Trust me. The cashew topping on the quinoa is a nice touch, and the spicing of the woolly chicken is sweet and hot in a vaguely Cajun way that is not entirely terrible. However, the veggies are dreary- tough-going Chinese leaf cabbage and kale, a bundle of grated carrot and red pepper- and the lime and ginger vinaigrette is vile. Way too sweet. Way too astringent. 4/10

While there are a few light and spongy mini falafel in here, this salad is a cacophony of angry, clashing flavours: fiery, soapy micro coriander; sharp, raw red onion; sticky, claggy cous cous that is harshly hot (chilli flakes) and way too sweet (sultanas). The inexplicable lemon and maple syrup (!) dressing is less disastrous than it sounds- mainly because it is meek in flavour. But, naturally, it still tastes awful when used to dress the mixed leaves that conspicuously bulk out this tub's main compartment. 4/10

In theory, you cannot go too wrong pairing reasonably creamy, zingy goat's cheese with beetroot, but Waitrose almost fumble it. There is too little cheese and those wheatberries (think miniature pearl barley; actually whole-wheat kernels) offer scant flavour or textural bite. Even with green lentils threaded through the salad, it is a too soft-cushioned, rather indistinct mush. The assertively minty, lemon and creme fraiche dressing also turns prominently vinegary when it hits the salad. That is offset by the sweet beetroot, but still, this is a far from satisfying coalition of flavours. 5/10

Surely the test of a great supermarket salad is whether or not you can enjoy it without the dressing? This salad's main thrust of flavour may be "leafy greens", but it does offer enough iron, vegetal and nutty variety- winningly al dente broccoli, sprouted peas, pumpkin seeds, aduki beans- that you could happily eat it naked. The roast chicken is firm and nicely seasoned, and the east Asian roasted peanut dressing is unusually deft (not too sweet, smoky, real peanut pieces). Go easy with it, though, otherwise it will drown out those other flavours. 8/10

There is some redness and evidence of herbs on that rather mushy chicken, but something has happened to it. The flavour is so faint that you will have no idea what it is. In fact, digging through the layers of bell pepper (never a pleasure) and sweetcorn (ditto), the only thing that demonstrably tastes of anything in this salad is a bottom strata of yellow rice, cooked with turmeric. When doused over the salad, the dominant flavour that comes through from the "fiery, fragrant" dressing is simply tomato. Tomato. And more tomato. It is like making repetitive small talk with a very dull relative. 3/10

Hallelujah! At last, a sharp mustardy vinaigrette that, when you have worked your way through the headline components, makes eating the remaining leaves a pleasure. However, do not go too early with it. First, enjoy the unusually bold flavours of the plump and smoky, wood-roasted peppers and the non-specific aged Italian cheese, in what is Pret's best-seller. The moderately tasty chicken thigh meat works well with the sweet pistachios. Pedants may bridle at the presence of kalamata olives in an Italian salad. In flavour terms, they are an unwelcome bitter, sharp-elbowed component. 7/10

This salad has some significant flaws. The sweet-date falafel are dense, dry and overcooked, and the salad is garnished with a horribly sour and bitter pickled green chilli pepper. But, despite that, you can understand why it has become Eat's best-seller. The tabbouleh is packed with parsley (and tasteless nuggets of tomato), the hummus is good and nutty, sesame-forward stuff, and the sliced red cabbage is a refreshing mineral component. The bullying lime and honey dressing, however (surely lemon would be a more logical choice?), just makes everything taste of, well, lime. 6/10