Amidst the glitz and glam, what also managed to catch our attention was Taimur Ali Khan's third birthday cake. The Christmas-themed birthday cake was studded with festive elements 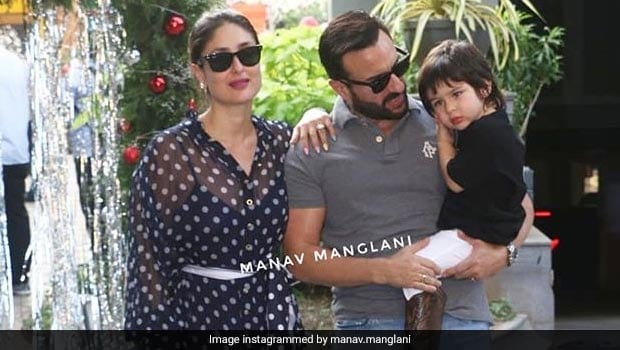 Kareena will be seen in 'Good Newwz' with Akshay Kumar, Diljit Dosanjh

Internet sensation Taimur Ali Khan is celebrating his third birthday today. Parents Kareena Kapoor Khan and Saif Ali Khan threw a birthday party for their son in Mumbai, on Thursday. The starry guest list included Karisma Kapoor with her children, Soha Ali Khan with her daughter Inaaya Kemmu, Karan Johar who attended the birthday bash with son Yash, Riteish Deshmukh and Genelia Deshmukh were also spotted at the do with children Riaan and Rahyl. Amidst the glitz and glam, what also managed to catch our attention was Taimur Ali Khan's third birthday cake. The Christmas-themed birthday cake was studded with festive elements. One can see a fondue Santa, reindeer, Christmas stocking, joss stick, candies, presents and gingerbread man in a picture shared by Karisma Kapoor. In one of her recent interviews with a leading media house, Kareena said that Taimur has demanded two birthday cakes for his third birthday; well, we guess a two-tiered cake covered in red and white fondue comes close. Karisma in her Instagram story also gave us a peep into the massive and heavily decked up Christmas tree that was one of the highlights of Taimur's themed birthday.The paparazzi present outside the party were also given a special chocolate cake by Kareena and Saif. Earlier today, Sara Ali Khan also posted pictures with Taimur, wishing him on his third birthday.

Kareena who will be seen in 'Good Newwz' with Akshay Kumar, Diljit Dosanjh and Kiara Advani is busy with promotions of the multi-starrer. 'Good Newwz' hits the theatre on 27th December 2019, and is touted as one of the biggest releases of the year.