The best pancakes in the world 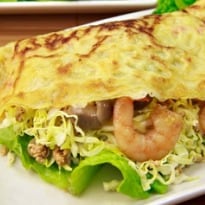 Given their simplicity and spartan ingredients, it is unsurprising that pancakes are present in almost every food culture, from Russian blinis to Vietnamese banh xeo. So which are the best?

Pancake Day is big business. Waitrose is forecasting a 500% rise in frying pan sales in the week leading up to 4 March, while Sainsbury's expects to sell enough batter mix to make three million pancakes. Last year, topping de nos jours Nutella sold nearly one million jars in the week preceding Pancake Day. It is all quite ironic, given that Shrove Tuesday is meant to be about using up rich foods before the start of Lent, not buying new ones.

People have made pancakes for millennia. The Romans called them alita docia, meaning "another sweet". There is archaeological evidence that "varieties of pancakes are probably the earliest and most widespread types of cereal food eaten in prehistoric societies," according to Martin Jones in his book Feast: Why Humans Share Food.

Hundreds of years before Betty Crocker's Traditional Pancake Mix, and its nontraditional ingredients (dextrose, egg yolk powder, palm fat), pancakes were mentioned in Apicius. By the 15th century, English culinary texts were using the term "pancakes", and by 1599 pancakes were commonplace enough to warrant a mention by Shakespeare in As You Like It.

The association with the Lent period is also a long one, albeit with different customs in different countries (in medieval Germany, pancakes were eaten after Lent, not before). In Russia, "blini were sold by street vendors during the Maslyanitsa or 'butter festival' before Lent," says Alan Davidson in the Oxford Companion to Food.

But pancakes are far from just a western thing. Given their simplicity and spartan ingredients, it is unsurprising that pancakes are present in almost every food culture. So which country makes the best ones?

To most Brits, a classic pancakes is a thin one. If we fancy a chubbier cake, then it is a Scotch pancake or a drop scone. On the thickness scale, this places the standard Brit-cake somewhere between whisper-thin French crepes and the stouter American buttermilk pancakes. Thinner pancakes are certainly easier to roll and fold, so they lend themselves to filling as well as topping, but there is something unapologetic and glorious about an American pancake stack drenched in maple syrup (what Seb Emina calls "a culinary Empire State Building - a simple totem to success and gluttony").

Pikelets are popular in Australia and New Zealand - think drop scones, but eaten in a nicer climate. Australia also gave the world Bill Granger's ricotta hotcakes with honeycomb butter, a combination so irresistible that tourists from all over the world head to his Sydney cafes to try them.

Asia arguably rivals Europe as the continent with the best pancakes, especially in terms of diversity. Vietnamese banh xeo are not only delicious, but a boon to those with allergies or intolerances as they're made without eggs, and with gluten-free rice flour and coconut milk. Uyen Luu has a good recipe for these golden, crispy crepes stuffed with pork and prawns in My Vietnamese Kitchen.

Korea's bindae duk win health points - they're made with mung beans. Over in Japan, an okonomiyaki is a bona fide meal, made with flour, eggs and shredded cabbage as well as meat or seafood. China gave the world bao bing, made with a flour and hot water dough, and born to wrap around peking duck.

Less well known are Sri Lanka's pani pol, made with coconut, and Indonesia's dadar gulung, a plain batter pancake wrapped around sweetened coconut meat. India has a cookbook's worth of pancake variations - including crispy dosa, made with rice batter, and the thicker uttapam.

The list goes on - there's Ethiopian injera (somewhere between a pancake and a flatbread), the corn pancakes of Central America, and the johnnycakes or hoe cakes that Native Americans were making long before iHop came along.

We haven't even got started on toppings and fillings - luscious dulce de leche in Argentina, butter and sugar on a German schmarren, bacon and melted gouda on Dutch pannenkoeken. Of course, if your batter ingredients are good enough, you may wish to enhance, rather than disguise, the taste of your pancakes - which is where the British love of lemon and sugar comes in. But with a whole world of pancakes to try, perhaps it is time to try something different this Shrove Tuesday.