The Best Way to Drink Whiskey, According to Science

A competing theory suggests that adding water releases molecules that improve the flavor. 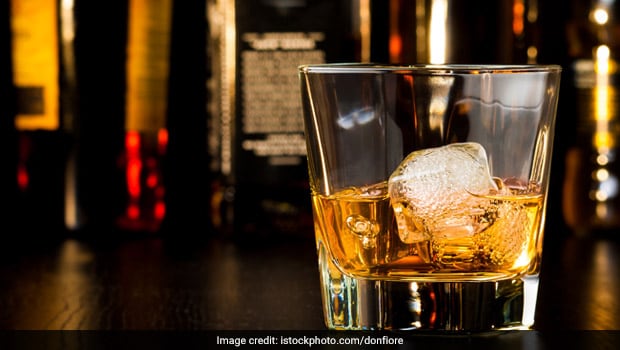 Highlights
Two physical chemists walk into a bar. They order whiskeys, and a jolly Scotsman one stool over insists they add a splash of water to optimize the flavor of the spirits. Inspired by the smooth, smoky flavor, they vow to investigate a question whiskey enthusiasts answered decades ago: Does adding water to whiskey really make it taste better?

That's the almost true story behind a paper published this week in the journal Scientific Reports. Bjorn Karlsson and Ran Friedman of the Linnaeus University Center for Biomaterials Chemistry are not whiskey drinkers, but Friedman did visit Scotland, and he raised an eyebrow at the locals' dedication to watering down even the fanciest Scotch.

Like a good scientist, he wanted to test the assumption, so he teamed up with Karlsson and used computer simulations to model the molecular composition of whiskey.

There are two competing theories for why adding water to whiskey might improve the flavor, Karlsson said. The first suggests that adding water traps compounds that are unpleasant.

Whiskey contains fatty acid esters that have two very different ends. The head is electrostatically attracted to water and the tail is not. Fatty acid esters in water can form compounds called micelles. In micelles, all the tails come together in the middle while the heads form a sphere on the outside, like a bouquet of lollipops with their sticks all tied together on the inside. Adding water to whiskey could, theoretically, cause more micelles to form, trapping compounds that don't taste or smell good.

A competing theory suggests that adding water releases molecules that improve the flavor. Water and ethanol don't make for a perfectly uniform mixture. Aromatic compounds could become trapped in ethanol clusters and never reach the surface. Our tongues are only capable of identifying the flavors, sweet, salty, sour, bitter, and umami (savory), so aroma is really important for detecting all the other flavors that connoisseurs appreciate in whiskey.

Karlsson and Friedman did calculations and found that fatty acid esters exist in such low concentrations that the first theory is unlikely, so they decided to focus on the second. In reality, "whiskey is a complicated mixture of hundreds or even thousands of compounds," Karlsson said. They focused on just three: water, ethanol, and an aromatic compound called guaiacol.

Guaiacol is what gives whiskey that smoky, spicy, peaty flavor. Chemically, guaiacol is similar to a lot of other whiskey aroma compounds like vanillin (with the scent of vanilla) and limonene (citrus). These and other flavor compounds are not attracted to water and are more likely to become trapped in ethanol clusters.

In the researchers' simulations, they found that the concentration of ethanol had a large effect on guaiacol. At concentrations above 59 percent ethanol (the alcohol content to which whiskey is distilled) the guaiacol was mixed throughout. Whiskey is diluted before bottling to about 40 percent ethanol. In the simulation, at 40 percent, ethanol accumulated near the surface, bringing the guaiacol with it. At about 27 percent the ethanol began to aerosolize, presumably freeing the guaiacol even further.

If their state of the art simulations were a SIMS video game, you would play the role of a stressed out bartender and spend hours adjusting the water and alcohol levels back and forth. Not enough water, and the guaiacol won't bubble up into the nostrils of your whiskey-swilling patrons. Too much, and your angry customers spit out the flavorless, watered down spirits.

"Adding water changes the equilibrium," said Daniel Lacks who was not involved with the study, but conducts similar modeling experiments at Case Western University. The new model shows that diluting the whiskey "causes molecules to rise to the surface."

But Paul Hughes, a food scientist and distilling expert at Oregon State, was not convinced that the propensity of ethanol to rise to the surface when whiskey is diluted tells the whole story. In the simulation, only three types of molecules were included, and their activity was modeled in a very tiny volume of spirits. "My sense is that the box they've used isn't tall enough," Hughes said.

The ratio of surface area to volume in the simulation is not at all similar to what you get with a bottle or a glass, he said. He predicts that disruption of the ethanol clusters within the bulk of the whiskey may also be important.

Whether by disrupting ethanol clusters or encouraging the molecules to rise to the surface, it's clear that adding water to whiskey has the molecular potential to release important flavor compounds like guaiacol. So why isn't whiskey simply bottled at lower alcohol concentrations?

If diluting whiskey really does mean that aromatic molecules evaporate from the surface, "by bottling at higher concentrations, you get less deterioration of taste," Lacks said. Whiskey, by definition, has to be 40 percent alcohol, said Hughes. Diluting it would also increase packaging and distribution costs and take away the choice from the consumer.

At the end of the day, individuals should drink their whisky however they prefer it, said Hughes, but "if someone says they don't like whiskey," he added, "they just haven't tried the right one yet."