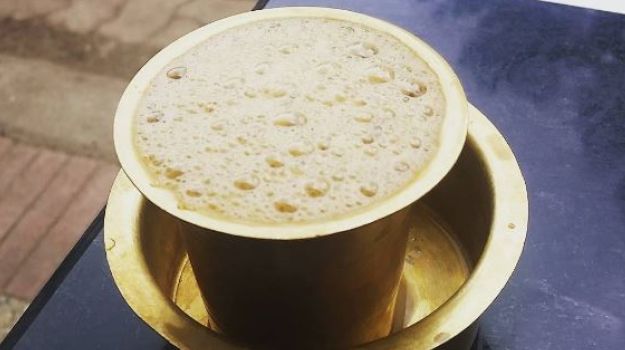 There is no greater love than the love for a traditional cup of filter kaapi bursting with robust fragrance and a spellbinding flavour. This is no exaggeration, ask any South Indian and you will catch a glimpse of inexplicable happiness on their face just by the mere mention of the word kaapi. I fell in love with kaapi too when I visited South India. Different regions prepare their coffee in their own discreet style. While the rich, creamy and frothy filter coffee from Tamil Nadu won my heart, the homemade kattan kappi prepared by my friend's mother living in a small town near Thekkady in Kerala was equally pleasurable.

One of the rarest sights in North India associated with coffee-making is the mixing bit that exhibits much finesse and skill but it is quite common in South India. Most local tea or coffee shops in South India will have a customary act of mixing the coffee by pouring it and pulling the beverage from one tumbler to the other, stretching it to as much as one to two meters. Thus, the cult of 'meter coffee' started. This traditional practice is nothing extraordinary for the locals but it is a sight to marvel at for the rest of the world.

Promoted
Listen to the latest songs, only on JioSaavn.com
(Also read: Filter Coffee: Is the Traditional Hot Brew Losing its Popularity in South India?)

"The practice has been going on for many years in the Southern states. In my opinion, it just aims to fetch three results - well-blended ingredients, cooling the beverage and achieving an incredible froth at the top of the drink," say Ashwin Rajagopalan, Food Writer and Blogger. While many like Ashwin, who must have grown up watching the captivating act, put logic at the very core of the so-called 'meter coffee', others perceive it as an awe striking phenomenon. "The practice of pulling tea or coffee is not just exclusive to India. I came across Teh Tarik in Malaysia which works around the same idea," noted Ashwin.

The term Teh Tarik is derived from the Malaysian word for tea - Teh. The process of pulling tea and pouring it continuously from one vessel to the other gives it the name - Teh Tarik. The vigourous pouring ritual is combined with a bit of condensed milk to arrive at a type of tea that is magical in all senses - smooth, creamy, aromatic and frothy!

The South Indian style of coffee making is a laborious process which makes every sip a well-relished and cherished memory. The essence of carefully filtered coffee blended with milk and the aroma oozing out of your cup is an experience you cannot miss. It is then mixed in an awe-inspiring manner to be finally served to its taker. This is something that makes it an experience to remember and revisit.