The Last Bite You Take Affects Your Food Preferences 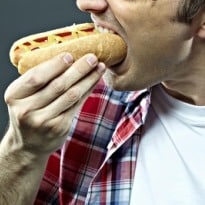 Ever wondered what makes you revisit some of your favourite foods again? A new research holds that your memory registers the most latest thing experienced by your senses. In case of foods, the last bite stays fresh in your memory and influences your decision as to when do you want to eat it again.

Almost 130 undergraduate students were asked to sample three flavours of crackers and then choose one to eat. They were then given a specific number of crackers and were asked to rate how much they enjoyed each one after they ate it. The results revealed that students who had eaten the larger portion (15 crackers) reported significantly lower enjoyment at the end than those who had eaten the smaller portion (three crackers). These findings replicate previous findings on "sensory-specific satiety": Each bit of food is less pleasant than the one before it. The study concluded that the bigger the portion, the less enjoyment you get out of the last few bites. More importantly, participants' enjoyment of the last cracker seemed to influence how soon the students wanted to eat the crackers again.

"These results suggest that the most recent tastes experienced in the last few bites of a given food drive our decisions about when to eat that food again," Garbinsky noted.A glass of juice, a bowl of ice cream, or a bag of potato chips contains many units of very similar stimuli that are consumed one sip or bite at a time until the entire portion has been eaten.

"So, if we take a lot of bites of the same food in succession, our memory for the last bites may interfere with our ability to accurately remember the initial bites of that food," researchers noted.

Listen to the latest songs, only on JioSaavn.com
The study was published in the journal Psychological Science.