The Root of the Matter: How to Make Lentil Salad 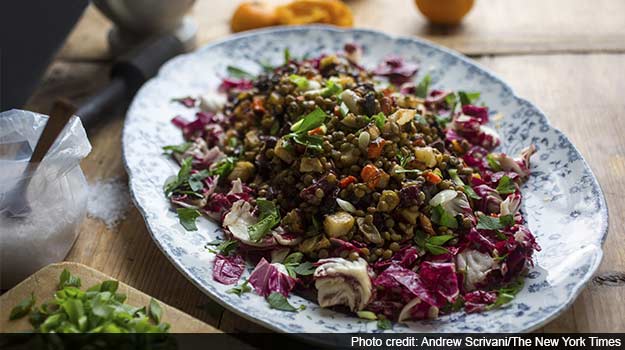 A lentil salad can be tasty. It can healthy. But it's rarely pretty. Except this one. Here's a version that is as vivid and bright in looks as it is in flavor.

The color comes from caramelized root vegetables in a range of hues, the more the better. If you're a winter farmers market habitué, this is your moment to indulge in all the varieties of turnips, beets, carrots and winter squash that are offered. They may not be as thrilling as heirloom tomatoes, but they have their own quiet charm, and this salad is a terrific place to flaunt it.

Then start roasting the densest vegetables like butternut squash and carrots first, adding the quicker-cooking ones later so everything emerges from the oven at the same time, golden brown and gorgeous. You don't need to be exact here; root vegetables have a wide margin of error when it comes to doneness. Just as long as they are tender within, the degree of browning on the surface can vary.

If you don't want to use the bacon, fine. While it adds a brawny smokiness to the salad, it's not essential. The sherry vinaigrette, coupled with a squeeze of fresh tangerine juice at the end, has an assertive enough character to make up for the lack of pork. Tangerine sounds a bit unusual, I know, but it is more floral and sweeter than lemon, and I usually have it or a bowl of clementines on the counter in winter.

Now, a word about the lentils. I used the plain old brown ones here because they are easy to find and, when cooked with a bay leaf and some garlic, taste earthy and rich. But they don't hold their shape as well as tiny green French lentils (lentilles du Puy), so if that's your priority and you don't mind tracking them down, they are best.

This makes a near mountain of salad, so serve it for a party or plan on leftovers. It will be just as appealing shared with friends or eaten solo at your desk for lunch the next day.

For the Lentil Salad:

1 sprig rosemary, cut in half

For the Sherry Vinaigrette:

1. Heat oven to 400 degrees. Place vegetables in one layer on 1 or 2 large rimmed baking pans, then toss with olive oil and salt. Place thyme and rosemary on top of vegetables, cover pans with foil and roast for 25 minutes. Remove foil, stir in bacon if using and bake for 30 to 40 minutes longer, until vegetables are tender and golden all over.

2. In a large pot, combine lentils, 6 cups water, garlic, bay leaf, salt and pepper and bring to a boil over high heat. Reduce heat to low and simmer for 20 to 30 minutes, until lentils are tender.

3. In a small bowl, whisk together vinegar, mustard and salt. Then whisk in olive oil.

4. Drain lentils and discard bay leaf; keep or discard garlic as you like. Toss lentils with half of the sherry vinaigrette while still warm. Add more salt, olive oil and vinegar as needed.

5. Toss radicchio with enough of remaining vinaigrette to lightly coat it and arrange it on a platter. Combine lentils and roasted vegetables, adding more of the vinaigrette to taste; spoon mixture on top of radicchio. Garnish with scallions, parsley, sea salt and black pepper. Squeeze tangerine juice over the lentils and drizzle with more olive oil if needed.