The US Supreme Court's Secret to Civility? Lots of Good Food and Wine 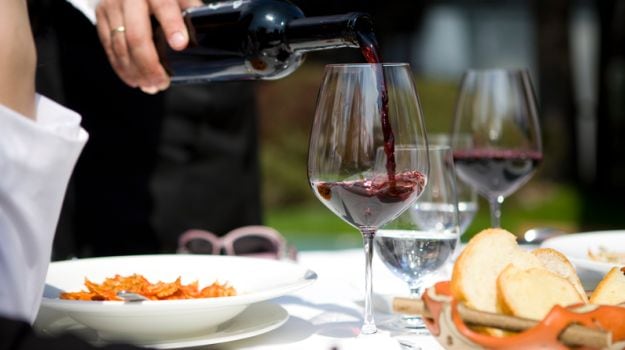 
The scales of justice might not be the only ones getting a workout at the highest court in the land. At a Smithsonian-led discussion on Wednesday night about the Supreme Court's food culture, two justices revealed that the institution's civility is fed by a veritable buffet of shared meals, from casual lunches to elaborate dinners.

Here's how birthday lunches go when the court is in session, per Justice Ruth Bader Ginsburg: "The chief brings in wine and we toast the birthday boy or girl," she said during the talk at the Museum of American History on the current and historical role of food in the court. Ginsburg also revealed another reason she is mourning the death earlier this year of her fellow justice (and foodie), Antonin Scalia, who traditionally led the justices in serenade of "Happy Birthday."

"We are missing our chorus leader, because most of us can't carry a tune," she said.

And then there are the dinners - each justice is greeted into the nine-member club with a welcome meal, and also feted on retirement (oh, and then there are the annual pre-State of the Union feasts and regular spouse lunches - and that's not to mention the evening repasts with clerks, weekend bagel spreads and ever-stocked candy bowls).

Sonia Sotomayor explained the custom of the ceremonial first dinner held in honor of an arriving justice. The most junior member is tasked with arranging the gathering, which hardly sound like slapdash affairs. Justice Samuel Alito planned her dinner, she recalled, and incorporated a Spanish guitar player as a nod to her Hispanic heritage and presented her with a bottle of wine labeled with her name.

When it came time for her to plan one - this time for Elena Kagan - Sotomayor did her homework, calling a friend of the junior justice's to determine her favorite foods. At the pal's suggestion of Chinese, Sotomayor worked out an Asian-influenced menu (tricky because Justice Stevens doesn't like the Far East cuisine). A puzzled Kagan later asked Sotomayor about the meal's theme. It turned out that Kagan, in fact, didn't like Chinese - her friend did.

Ginsburg recalled that at Sandra Day O'Connor's retirement dinner, the group screened a John Wayne movie at the Library of Congress' Pickford Theater - "it had every politically incorrect thing in it" - while munching on popcorn, then dug into a dinner of Southwestern fare.

It's no surprise that members of the elite club rely on shared meals to maintain comity - in fact, it's in the institution's DNA. In the court's early years, the justices lived together in a boarding house and took most meals together. Ginsburg noted that once that tradition ended, so too did the court's practice of issuing only one opinion per case.

"When the boardinghouse style disappeared," she said. "Dissent began to appear."