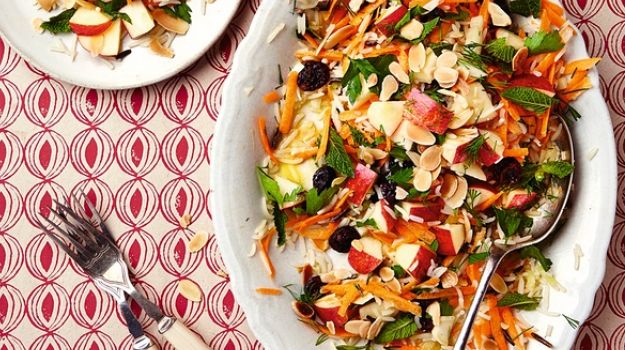 It's usually about this time of year that the spectre of autumn begins to loom, casting its shadow over the shortening days. September is a glorious month, what with all the apples, pears, nuts and other delights it has to offer, but somehow the end of August is a much more wistful and nostalgic time. Well, refuse to buckle to this temptation and instead rejoice defiantly in the warm weather while we still have it. Indian summers often promise a good few weeks more of sunshine at least, so why not eat by a river, in a park, at the seaside, or by a nearby canal. I intend to do so whenever a whisper of warmth or sunshine is in the air, and today's two recipes are perfect for toasting the outdoors.

Early apple varieties, such as Discovery, are now in full swing, and add sweetness and crunch to this easy but exciting rice salad that's packed with texture and flavour. Serves four to six.

Soak the rice in cold water for half an hour. Meanwhile, chop and prepare all the salad ingredients. Drain the rice and put it in a large saucepan with half a teaspoon of salt. Pour over 750ml boiling water, bring the pan to simmering point, then turn down the heat and cook gently for about 25 minutes, until the rice is cooked but still has a tiny bite to it. Drain, cover and keep somewhere warm for five to 10 minutes, so the rice can finish cooking in its own steam (this is what helps make it light and fluffy).

Put the raisins in a small bowl, pour over enough boiling water to cover, and leave to plump up. Whisk the dressing ingredients in a jar or bowl, season to taste, then pour half the dressing over the rice while it's still hot, mix in well to coat, and leave to cool.

Once cool, drain the raisins and stir them into the rice with all the other salad ingredients. Pour over the remaining dressing and toss gently but thoroughly " each mouthful should be a little explosion of flavours and textures. If the salad still isn't quite bright and sparkly enough for your tastes, add a little more dressing until it tastes perfect.

This quiche is intensely cheesy and still slightly quivering (leave out the bacon, if you prefer). Serve with a green salad for a fabulous weekend lunch. Serves six to eight.

Heat the oven to 180C/350F/gas mark 4. Roll out the pastry and lay it across a 23cm flan tin, pressing the dough into the corners, then chill in the freezer for 15 minutes.

Cover the pastry with baking paper and baking beans, and bake for 15 minutes, then remove the paper and beans and return the tart case to the oven for five minutes longer, until pale golden.

Meanwhile, melt the butter in a frying pan over a medium heat. When it's hot, add the bacon and fry until crisp and golden on both sides, then remove and drain on kitchen paper. Add the spring onions and thyme to the same pan, and cook for a few minutes, until the onions have softened, then take the pan off the heat and leave to cool.

Whisk the cream until slightly thickened, then whisk in the eggs and gruy"re. Season the mix with a little salt (careful, because the cheese and bacon are already quite salty) and pepper, then grate in plenty of nutmeg " about seven or eight good gratings, say.

Break the bacon pieces into halves or thirds, and lay these and the onion mix over the base of the tart. Pour in the egg mix so it fills the tart right up to the edge, and scatter over the parmesan. Put the tart on an oven tray in the middle of the oven and bake for 25-30 minutes, until golden on top and set with just a slight wobble in the middle. Leave to cool and firm up a little before serving.

The rice salad keeps well for a few days if covered and stored in the fridge. It makes a great lunch box dish, especially if topped with some crumbled feta, torn mozzarella or grilled halloumi. Or serve leftover rice as an easy supper, topped with a fried egg and some hot sauce alongside; or have it with a couple of lamb chops. The quiche will not last very long if your household's anything like mine, but perhaps that's because it keeps better outside the fridge rather than in (otherwise the pastry will go soggy), so is a constant temptation on the worktop. Store parmesan rinds in the fridge or freezer, and use to add flavour to soups and stews. If you have a houseful of children over the summer holiday, use leftover pastry for jammy tarts, or slightly more grown up french fruit tarts: make cr"me p""tissi"re, spread over cooked tart cases, top with summer berries and glaze with apricot jam.