Indian scientists and experts have developed a new variety called the 'Chhappan Bhog' pumpkin whose health benefits far exceed those of the ordinary. 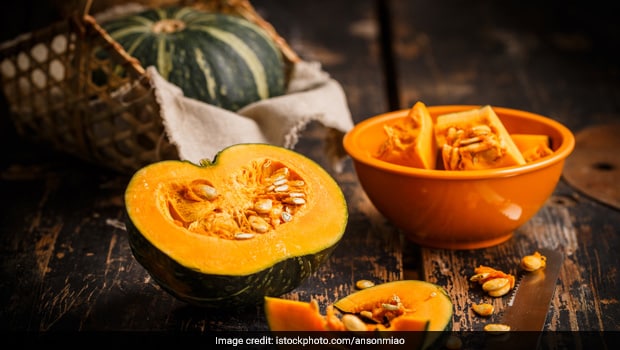 Pumpkin is a healthy vegetable, but a new variety of it has been developed which is even better.

Pumpkin is one vegetable whose health benefits cannot be understated. This member of the squash family packs a punch in multiple ways, whether you consume it whole, its pulp or even its seeds. The sheer amount of Vitamin A, C and E content in this vegetable can give a serious complex to its rivals. Another less-known benefit of pumpkin is its high calcium and magnesium content, which is extremely essential for the body's proper functioning. Science has taken the health properties of this vegetable to an all-new level. Indian scientists have developed a brand new variety of pumpkin whose health benefits far exceed those of the ordinary pumpkin.

Pumpkin is the new superfood on the block.

Named as 'Kashi Shubangi' or the 'Chhappan Bhog' pumpkin, scientists of the Indian Vegetable Research Institute have come up with the variant of the vegetable. According to principal scientist of the institute, Dr Sudhakar Pandey, 'Chhappan' pumpkin is not only an important vegetable crop, but also has medicinal properties. The pumpkin variant, which is slightly small in size, has an increased number of health benefits than its regular counterpart. It has the ability to reduce hydrolysis risk, blood pressure and obesity.

"This variety of pumpkin is rich in almost all types of vitamins and minerals in this crop. Among them, mainly vitamin A (211 mg), vitamin C (20.9 mg) and potassium (319 mg) and phosphorus (52 mg) are found. It is found in fruits per 100 grams. Not only this, this vegetable is also rich in nutrients. Moreover, this specie developed at the IIVR can be planted in pots as well as fields," said Dr. Pandey.

Pumpkin has number of health benefits for the consumer, and the farmer too.

The benefits of the 'Chhappan Bhog' pumpkin are two-fold. It is not just beneficial for the person who consumes it, but also for the farmer who plants it. The scientists suggest that if a farmer cultivates this crop, it might lead to a future rise in income.

Dr. Pandey revealed that land should be ploughed properly prior to sowing, which should happen around mid-September. It is a crop which will require irrigation approximately every 15 days. The method of drip irrigation is more suitable for the crop. The plants yield the first crop in 50 to 55 days and then the yield continues for almost 70 days. In fact, each plant yields up to 8 to 10 pumpkins and the total yield is 325-350 quintals per hectare. This may prove to be a huge source of economic strength for the farmers who are sowing the crop.

Thus, this pumpkin from Varanasi may be a superfood for both the consumers and the farmers!