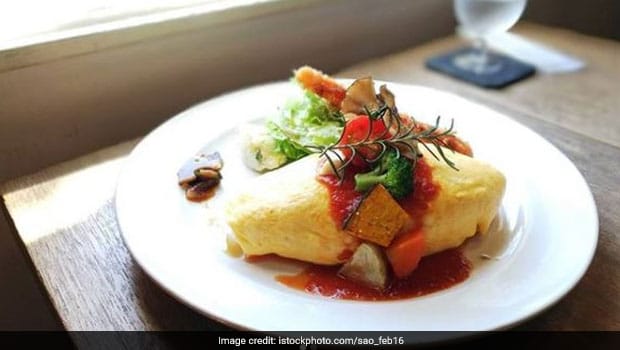 Highlights
Japanese are known to innovate when it comes to technology and also food. A lot of experiments have been done with food and eggs seem to be their favourite ingredients. Recently, there was a lot of buzz about the fluffiest omelettes being served at a Tokyo restaurant and now, a new kind of egg dish is garnering many fans. Well, the dish in itself is not new but was popularized all over again through a video doing the rounds on social media. The unique thing about this dish is that you can't stop watching the way it is presented. It's really addictive! So, what is this dish?

It is known as the Japanese omurice and is served at a restaurant in Kyoto called Kichi Kichi. The word 'omu' refers to omelette and the word 'raisu' means rice in Japanese. This oozy, exploding omelette consists of a thin sheet that unfurls custardy scrambled eggs when it is split open. The dish originally belongs to the yoshoko cuisine which is a part of Japanese cooking.

The cook uses a special flipping technique to enclose a partially cooked scrambled egg into a delicate, almond-shaped omelette. The whole thing is then deftly balanced on top of a bed of fried rice. Once the dish is served to the guest, the omelette is skilfully sliced with a knife and it falls apart revealing the saucy scrambled egg all over the rice. The dish is then topped with a demi-glace which is made in different flavours or simply with ketchup. It is believed that the original omurice was first created during the 20th century in Tokyo in Japan and from there it traveled to other places such as Korea and Taiwan.

The interesting bit is way the thin sheet of omelette carrying the saucy scrambled egg is sliced open and spills artistically all over the rice which makes for a very satisfying experience.

Here are some beautiful pictures of Omurice we found on Instagram.

Promoted
Listen to the latest songs, only on JioSaavn.com
Watch the full video right here. It's a treat for your eyes.

CommentsAren't you curious to try? We definitely are!