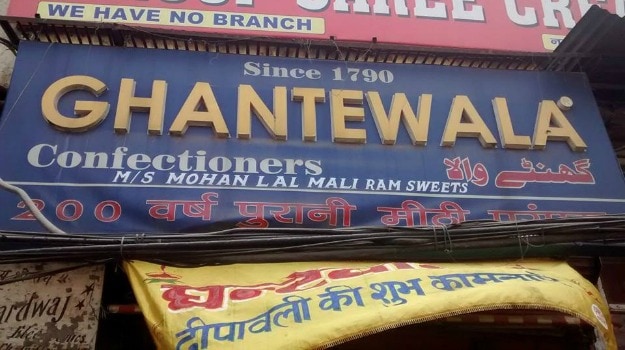 When Lala Sukh Lal Jain arrived in Dilli from Amer in 1790, and started selling his Mishri Mawa  on a push cart, he perhaps could never have imagined that his business would transition into one of not just Chandni Chowk’s but Delhi’s most legendary sweet shops. With a rich history of almost 225 years, Ghantewala has catered to Prime Ministers, foreign delegations and even Mughal emperors.

This iconic restaurant in Chandni Chowk has not been an attraction just for Delhi-ites, but for tourists from all over the world. Its desi ghee-drenched treats and creamy halwas like Sohan Halwa and Karachi Halwa have healed many broken hearts and stood the test of time. But all good things do come to an end and so has the life of Ghantewala.

To the disappointment of its loyal customers, Ghantewala shut its doors last Wednesday and put a stop to its unparalleled history of almost 225 years. It has caused such deep disappointment in the food community that fans are urging entrepreneurs to buy it out to keep the legacy alive.

(This Indian Sweet is Being Made for Over 225 Years!) Comments

The story of its refreshingly uncommon name, which is definitely tied to a ‘ghanta’ (bell), is as old as the shop itself . Some say that since the ‘halwai’ (seller) was located opposite a school, each time the bell would ring, it could be heard down till the Red Fort where the Emperor Shah Alam would ,upon hearing it, summon his servants to fetch him some sweets from “ghante ke niche wala halwai” (shop under the bell).

Over the decades, the shop has only grown in terms of its menu and its loyal following! While the founder began by selling only one item Mishri Mawa, a Rajasthani sweet,  today Ghantewala also sells other savoury snacks like Samosas, Kachoris, Namkeen, Makhan Choora, Dalmoth and the list goes on. Never bowing down to contemporary food trends, this restaurant will always remain symbolic of the capital’s saccharine past and will always occupy a very special place in all of our hearts.