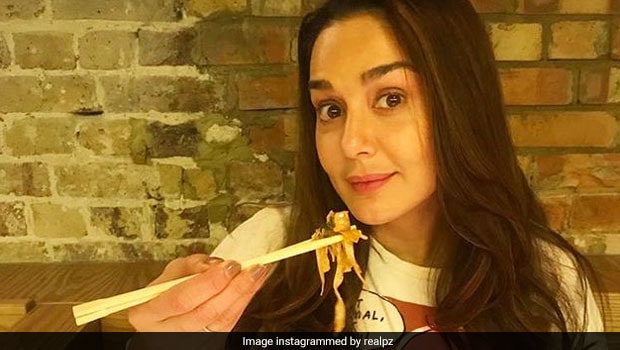 Holidays are here and you're lying if you say your thoughts aren't completely occupied with food and revelry. Christmas and New Year's is the time when even the strictest of health freaks indulge themselves and put thoughts of guilt and diet at the back of their minds. We all have been in a situation where we have completely demolished a festive feast and then dealt with the guilt by hiding our sins under layers and layers of fabulous winter clothing. Health freaks get a little too obsessed with their diets around the holidays. They talk of running to the gym and burning off calories right after holiday goodies and desserts successfully lure them into binges. But Bollywood actor Preity Zinta says that she has the perfect diet tip to avoid all the guilt and multiple extra trips to the gym during the holidays and it's truly hilarious. Preity Zinta, who often shares a number of workout and fitness videos on her Instagram page, recently shared a cheeky video, telling anguished fans and followers how to keep fit during the holidays.

The video starts with Preity saying in all seriousness, "Hi everyone. So a lot of people are asking me what is the best exercise during this holiday season to make sure you don't put on weight. So I actually have a really good exercise for you." But just when you decide that Zinta is going to dole out some secret fitness and diet tips and maybe rescue us from ourselves during this holiday season, Preity raises are hopes even more by saying, "you don't have to go to the gym, you don't need any dumb bells, you don't need anything. You just need your neck."

Also Read: The 5 Different Types Of Foodies Spotted During Holidays

That's when the actor brilliantly delivers the punch line: "Whenever somebody offers you food, all you have to do is this." Then she proceeds to shake her head to imply a 'no'. "It's the best exercise I promise," she says with a chuckle and a holiday wish for all her fans! Hilariously put Preity, but all we can say to that is, 'No can do!'

Also Read: 6 Things All Foodies Are Tired Of Hearing

Take a look at Preity Zinta's hilarious diet tip to prevent weight gain during the holidays:

Zinta's Instagram caption belied the jocularity of this hilarious 'diet tip' as she wrote, "Now that the holidays are close by here is some useful & simple advice to never gain weight." Well even Preity doesn't seem to have any advice to give to us compulsive foodies! Guess we'll just have to deal with the holiday weight gain the old way - with copious amounts of delicious hot chocolate served with a generous sprinkling of guilt!