What Should You do With All Your Old Spices? 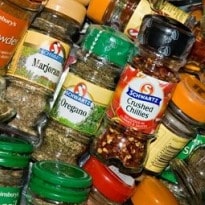 A recent survey suggests that there are millions of pounds' worth of unused spices sitting on our shelves. What should you do with those dusty jars of cumin, coriander and cayenne?

We called it the "Ottolenghi effect". Where once our spice cupboard was really just half a shelf housing dried basil and mild curry powder, suddenly that forgotten corner of the kitchen was playing host to harissa and sumac and saffron. Bart Spices reported an 82% increase in sales of za'atar. Supermarkets stocked szechuan pepper like it was no big thing. We learned to pronounce asafoetida.

And then we forgot all about them. Or so a recent report by the kitchen gadget company Kenwood would lead us to believe. According to the survey, there are £240m worth of unused herbs and spices languishing in this country's kitchens. And 13% of us confess to owning jars of spices more than four years out of date. (Last time I was at my parents' house, I found a jar of dried basil older than Justin Bieber.) My mother-in-law's spice drawer looks like the Schwartz history museum.

There's a simple explanation, says Dhruv Baker, MasterChef winner and author of Spice. "What happens is we see Atul [Kochar], Vivek [Singh] or Cyrus [Todiwala] on Saturday Kitchen and then rush out to buy all 12 spices they used in their recipe, cook the recipe once and forget the spices, which then languish in our cupboards. Often spices are used for specific one off recipes, not as everyday ingredients."

Or if you're like me, you just end up stockpiling spices on account of being an inefficient shopper. I currently count two jars of cayenne, two jars of cumin seeds, three jars of coriander seeds, and enough cinnamon to keep us in mulled wine for a month.

Arun Kapil, author of Fresh Spice, believes it comes down to a lack of imagination: "We're all too quick to pigeonhole and categorise. Take garam masala - we associate it with Indian food, yet it's a great all purpose mix that's delicious in many contexts beyond sprinkling it in our curries. I add it to oatmeal cookies, chuck a pinch in soda bread, add a touch to zesty vinaigrettes, and incorporate it into Cafe de Paris-style butters. The applications are limitless, it's only our imagination that limits its use."

Garam masala is certainly one of the lesser-used spices in my drawer (and why do they sell it in such vast jars?) but others are cruelly overlooked too. Caraway is a funny one. I bought it for making rye bread and it has been sitting inert ever since. But it's good with butters and baked fruits, or quietly humming away at the base of a curry. Try it in sauerkraut, or make your own kummel. Hic.

An online confessional yields other familiar culprits - mixed herbs (the most useless of them all), white pepper, ground coriander, celery salt, cayenne, cloves - and some less familiar ones - apple-pie spice, anyone? The best way of using them up is to blend them, says Baker. "It takes no time to make up a delicious spice paste which you can freeze in ice cube trays. You've then got a fantastic base for a curry ready to go. Or you can make a compound butter that also freezes well".

Strong advice, though I wonder if perhaps we are a little too hasty to write off so-called "out-of-date" spices? Chef Stevie Parle thinks so. "While ground spices lose their bite after a year at the most, whole spices will last a good few years. So it's best to buy them whole and grind them with one of those whizzy coffee grinders - though I'm convinced a pestle and mortar makes them taste better. Store them in an airtight container, and throw them out when all they're adding is a dusty flavour. Spices should sparkle."

As for using up a surfeit of spices, Parle takes the more-is-more approach. "I get through a lot of spices at home because when I use them, I use a lot. Don't be shy, just chuck them in - you can't go too far wrong and usually it'll go very right."

With Christmas approaching, there are plenty of opportunities for refreshing the spice cupboard. There's mulled wine, obviously, but I'd recommend lambswool as a far more interesting alternative - a warming concoction made with ale, baked apples, sugar and spices. Spices will add pep to mincemeat, and life to fruitcake. I like the warmth of cardamom in stollen. Edible gifts in the form of piccalilli and pickled pears take to spicing very well indeed, and naturally spices will give the Christmas leftovers a much-needed shimmer.

But we needn't scramble to use up every spice within a month of purchase. Though some might lose their edge over time it's a while before that jar of coriander seeds becomes a lost cause. As food TV producer and director Melanie Jappy told me: "I made a curry last night. I'm sure most of the spices were out of date. It was bloody delicious."

Is this your herb-and-spice cupboard? Photograph: Alamy