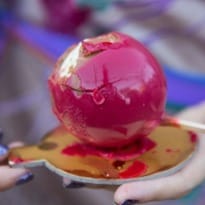 You can usually spot the gelato shop from the queue that snakes down the pavement in front. Regardless of heat wave or wind chill, Australia's sweet-toothed consumers are seemingly happy to wait for these sweet, slowly-churned concoctions. They pledge allegiance to a favourite shop and slowly work through its flavours. That can take some time. Combinations are being pushed to different levels; classic vanilla, chocolate and strawberry left behind by the once-fancy but now often commonplace concoctions such as salted caramel and poached figs with marsala.

Gelati - the plural of gelato - translates from the Italian "frozen". It is neither ice-cream nor sorbet; it has milk rather than cream as its base, which is then slowly churned. Some gelati makers insist on a traditional Pozzetti counter, with lids covering each gelato to keep the temperature constant. Others are happy to display their astonishing rainbow of flavours.

Proprietors such as Min Chai, co-owner of N2 Extreme Gelato, with shops in Sydney and Melbourne's Fitzroy, thinks we are becoming more sophisticated when it comes to what we look for in a good gelato.

"For far too long people have been served gelati with artificial flavours and colouring but now I think people are looking for products with real ingredients and honest flavours," she says.

Lisa Valmorbida, who runs new pop-up Pidapipo in Carlton, in Melbourne's inner-north, agrees. "Gelati is everywhere in Carlton but there wasn't anything new," she says. "There are other ways to make gelati, so we decided to do it from scratch."

That approach seems to be rewarded by discerning gelati consumers who focus on seasonal ingredients, a quality product, and time and care in the production of their favourite scoops. So where is worth waiting for? Share your favourite gelati haunts below - here are some of our Sydney and Melbourne shops where we're happy to join the queue ...

Liquid nitrogen billows out of mixers, whipping up gelati to order. Lab coats, safety glasses and test tubes add to the quirky mood of this fast-moving, buzzy gelateria and although it could be seen as gimmicky, the iced treats are good enough to keep the queues coming. Look out for more stores opening in both Sydney and Melbourne in the next couple of years.

Queues are part of the culture at Messina in Sydney and they formed before the doors opened on its first Melbourne shop in late 2013. So anticipated was the opening that social media was abuzz with anguish when it was announced that the time the doors opened on day one would be pushed back a few hours.

Lisa Valmorbida refined her gelati-making skills in a four-week intensive gelato course at the Carpigiano Gelato University in Italy and plans to open a gelateria in her family's shop, King & Godfree, in Carlton. In the meantime, she has a summer pop-up lab with 12 flavours available at any one time: the Nutella swirl, salted caramel, and pistachio (made from imported Sicilian nuts) are the most popular.

The Cow and the Moon

John and Wendy Crowl make their gelati on-site, out the back of their shop in Sydney's inner-west. They have created a community hub where good gelati and well-made single-origin coffee keep the crowds coming. Passionfruit cream and strawberry and balsamic gelati are just two of the winning flavours on offer.

Gelateria Primavera is part of Melbourne's Spring Street Grocer in the city, and has quickly established a cultish following with queues along the street. The menu is ever-changing, but the fior di latte and combination of cardamom, turmeric and pistachio have become signatures that aren't going anywhere.

Pompei's combines an authentic Italian feel with a Bondi experience at its classic Aussie beach location. Walk up to the counter and you will see the silver Pozzetti lids protecting the fresh gelati underneath. But feel free to ask for a taste. The dark chocolate, the hazelnut, the fior di latte are balanced, light and, although naturally sweet, not overly so.

Photo: One of the new breed of gelati being enjoyed at the Sydney festival village. Photo: Anna Kucera/Guardian Australia